EDINBURG – Amid an unceasing mist of rain, Mission Veterans Memorial became Edinburg Vela’s latest victim on Thursday as the Patriots fell to the Sabercats 39-12 at Cats Stadium in the District 31-5A regular-season finale. 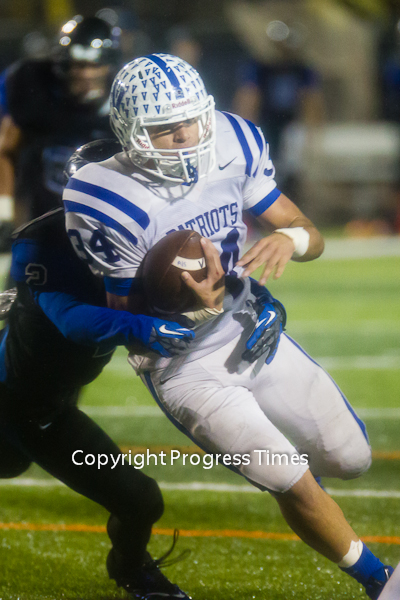 “Edinburg Vela beat us and you give every bit of credit to them,” Mission Veterans head coach David Gilpin said. “They outplayed us on the field. We’re going to the playoffs now and we’ll start off and everybody is 0-0, but as far as tonight’s concerned, we got beat in every phase of the game, including the coaching.”

“I’m not proud of ourselves,” added Gilpin. “Tonight was not a good night for us, but we’re going to come back and regroup tomorrow, and we’ll get ready to go to win a championship next weekend.”

The Patriots defense held Edinburg Vela’s potent offense to just 10 points in the first half and was still very much in the game.

However, the second half proved fatal for Mission Veterans as the Patriots were plagued by miscues and missed opportunities that resulted in the Sabercats putting up 29 second-half points that allowed Edinburg Vela to stroll away with a 39-12 victory and the No. 1 seed.

“It was only 10-0 at the half and we read them the Riot Act at halftime hoping they would respond, but they didn’t,” Gilpin said. “From the very top of our program to the bottom, we got beat.”

Despite the disappointing loss, Mission Veterans is turning the page and moving onto the playoffs in search of a championship that they set as one of this season’s objectives to accomplish.

“Like I told our kids, we’re going to erase this one, get our film work done tomorrow, and this game is done and let’s move forward,” Gilpin said. “We started this season looking to call ourselves champions and we have the opportunity to do that next week. We can’t afford to look back.”

Down only 3-0 in the second quarter, Edinburg Vela scored with 26 seconds left in the half on a 14-yard TD run by sophomore running back Robert Guerra to increase their lead to 10-0.

The Patriots went three-and-out in their first possession of the second half. On the Sabercats’ ensuing possession, Edinburg Vela senior quarterback Ebher López found wide receiver Elijah Reyna for a 39-yard TD pass to make it 17-0 after the extra point.

A sack and two fumbles in the same possession, the second resulting in a turnover, had Mission Veterans hand the ball back over to the Sabercats after a nine-play drive with less than seven minutes left in the third quarter.

Edinburg Vela added a 22-yard field goal on the next drive and a safety on the ensuing kickoff to increase their lead to 22-0 with 2:46 remaining in the third quarter.

Mission Veterans finally found the end zone when senior QB Santos Villarreal connected with sophomore Adam Solís for a 22-yard TD. The extra point was blocked to make it a 22-6 ballgame.

The Sabercats came right back and answered the Patriots’ TD with one of their own on a 4-yard run by López to increase the home team’s advantage 29-6.

Mission Veterans struck for their second TD in a row on a 4-yard pass to sophomore Román de León to cut Edinburg Vela’s lead to 29-12 after the extra point was blocked for the second consecutive time with 10:17 left in the game.

A 39-yard field goal with 7:31 left and a Patriots fumble that resulted in a 40-yard TD return by Reyna with 6:25 remaining sealed Edinburg Vela’s victory and the No. 1 seed.