When it comes to sports competitions, there are winners and there are losers. The winners receive accolades and are featured in sports pages and on magazine covers while the losers are encouraged to work harder so that they too may be winners next time. After all, as legendary Green Bay Packers’ head coach Vince Lombardi once said, “Winning isn’t everything, it’s the only thing.”

While that ‘winning is everything’ attitude is prevalent throughout our society, there is one organization that assures that all participants in its athletic competitions emerge as winners – Special Olympics. 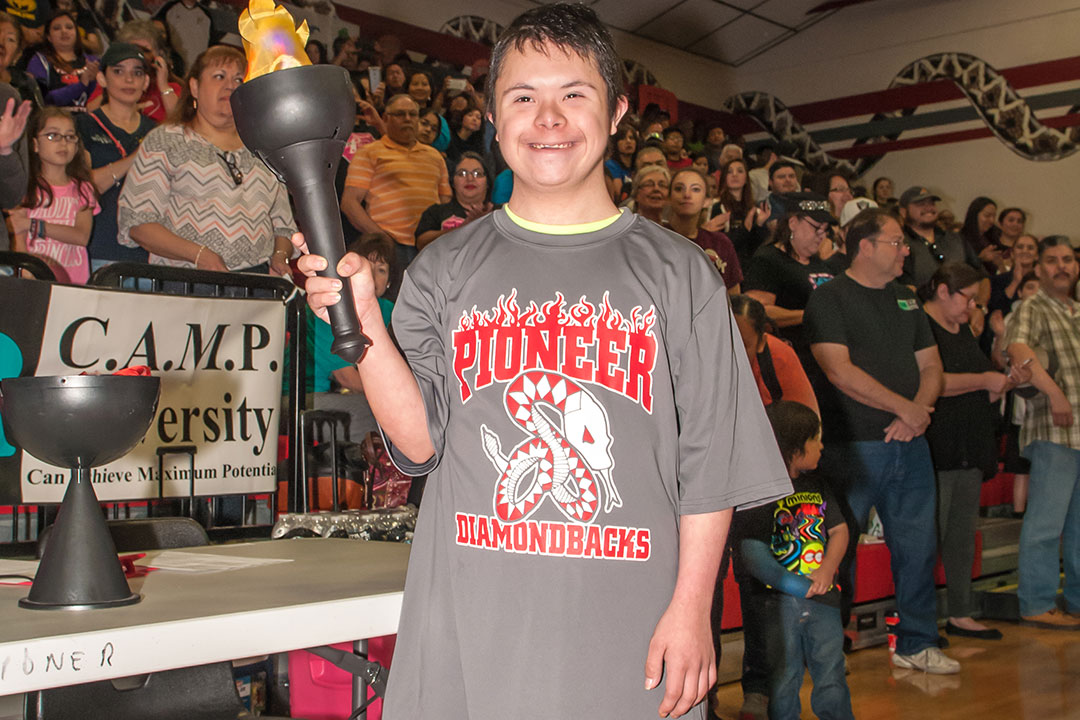 As the world’s largest sports organization for people with intellectual disabilities, Special Olympics transforms the lives of 4.5 million athletes in 170 countries through its sports competitions. Competitions such as the Texas Area 1 Basketball Competition held at Sharyland Pioneer High School Saturday.

With five basketball courts housed in three gyms, Pioneer High School has become the new home of the Area 1 basketball competition which outgrew its former home at Weslaco High School.

As an Adaptive Physical Education coach at Pioneer High School and Special Olympics coordinator for SISD, Guillermo Guzman played a major role in organizing Saturday’s event. As Guzman shared, the facilities available at Pioneer High made it an ideal venue for such a large event.

“The fact that we have five gyms available here at Pioneer has made the process a lot smoother,” Guzman explained. “The family members are very appreciative of the accommodations we have and the fact that they can actually walk around to see what their son or daughter is doing. While we are very grateful and appreciative to Weslaco for what they did to host this event for the past 10 years, we’re more spread out so we’re able to accommodate more students. This is an event for the entire Rio Grande Valley and we’re just happy to do our part.”

As Guzman went on to explain, approximately 1,000 young athletes participated in this year’s basketball competition. As impressive as that number is, he fully expects this event to grow in the years to come.

“Every year this event grows by approximately 100 to 120 participants,” Guzman said. “This being our first year, and with anything that’s this big in size, we have to make some changes to make things run smoother and to accommodate the students, the parents, the volunteers and everybody involved in and event such as this.”

After the opening ceremonies which included a parade of athletes, the pledge of allegiance, the National Anthem, the Special Olympics oath, led by 15-year old Veterans Memorial High School student Ethan Linares, and the carrying of the torch, by Pioneer High School student Axel Garcia, the 1,000 or so athletes were broken up into smaller groups and led into the different gyms to begin the competitions. Individual dribbling, shooting and passing skills as well as 3-on-3 and 5-on-5 basketball games made up the competitions. Afterwards the awards ceremonies were held in the school cafeteria.

“Participants received either a first, second or third place medal; a fourth, fifth or sixth place ribbon or a certificate of participation,” Guzman said. “Every student gets recognition in some way. Just hearing their name called out is a big thrill for them.”

While internationally, Special Olympics holds competitions in more than 30 Olympic-style individual and team sports, the large number of athletes in Area 1 has resulted in the sports offered being limited to basketball, bowling, bocce ball, powerlifting and track and field at the high school level and track and field at the elementary school level.

As Area 1 director for Special Olympics, Lauro Garza shared what an event such as Saturday’s basketball competition means to the participants when he said, “The main goal is participation and inclusion. We don’t focus on their disabilities, we focus on their abilities. By participating in the different athletic competitions we offer the students not only have fun and get to be around their friends but they also develop self-esteem and they have an opportunity to benefit from all the positive things participation in individual as well as team sports gives you.”