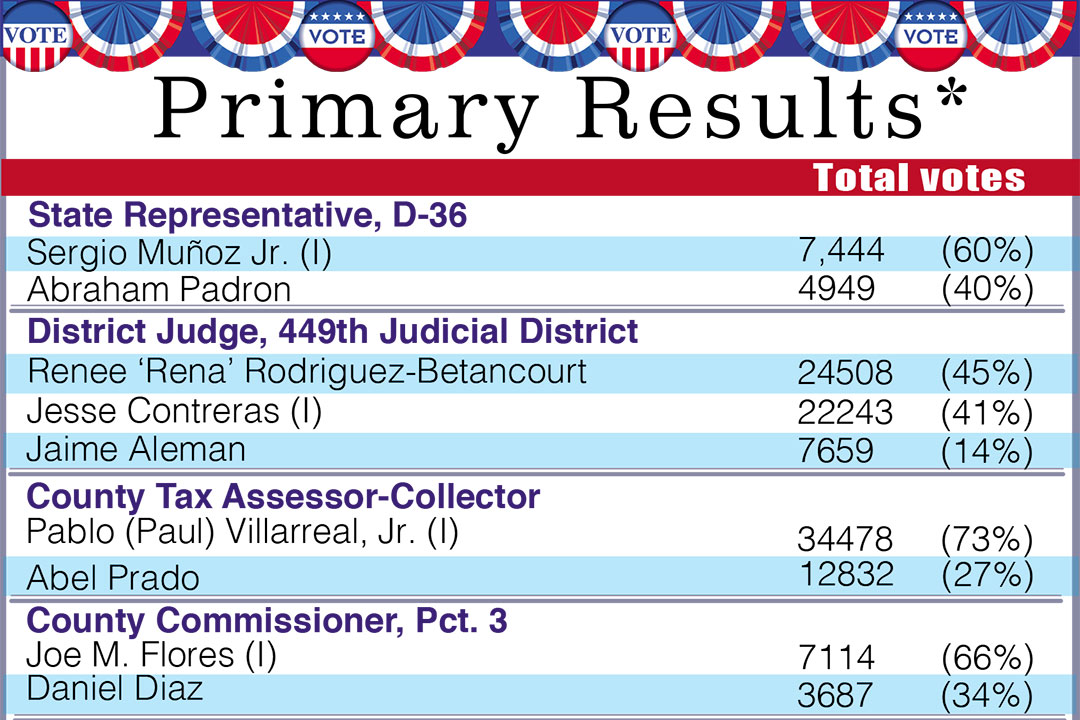 Muñoz celebrated his win at the Catholic War Veterans Post 1065 in Mission, stopping every few steps to pose for photos and receive congratulations from his supporters shortly after the early vote totals were released.

“This was a long campaign,” Muñoz said. “But I think at the end of the day we did what was right, and that was to run our race and make sure that we got our message across to the people within our district. I think that showed tonight.”

Muñoz said he knew this would be a tough campaign, but didn’t expect the race to enter into mudslinging-type territory.

“We didn’t know that some of the local political officials were going to get so involved and do whatever is necessary to try and get me out of office,” Muñoz said. “But at the end of the day, that fear, intimidation and threats got them nowhere. We ran our race, we do what’s right and we represent the best interest of everybody, not just a select few.”

At the Team Liberty victory party Tuesday night, Abraham Padron held a smile and tone of positivity while he addressed his supporting constituents.

“I want to think of different ways to help the community,” Padron said. “If I can’t be an elected official at this time, how else can I help my community? I don’t have to be a state rep to serve.”

Padron denied any alleged intimidation tactics regarding his opponent and said he wishes Muñoz the best.

“I was seeking his position, I was not successful and we move,” Padron said “There’s not threats. It was a very heated campaign, but it’s water under the bridge and we move forward.”

Joe Flores was re-elected as Pct. 3 county commissioner, after defeating challenger Daniel Diaz with a 65.8 percent of the vote. Until this election, Flores ran unopposed for 15 years.

“We’re going to continue the same thing that we’re doing, working with the commissioners and the county judge, continue doing work with (Texas Department of Transportation) and leverage more money if we can,” Flores said.

Diaz said he isn’t sure if he will run for office in the future, but he plans to stay in the political circuit. He said he would like to create a political action committee for people who aren’t part of the traditional political circles and don’t have a lot of money to spend on campaigns.

“If we were going to do something, we wanted to do it big and make a dent,” Diaz said. “Even though we lost, we still made some noise and still caught the eye of a lot of people. We took on, perhaps, one of the most powerful politicians in South Texas. I think at the very least I made a point and inspired someone to run for office too.”

In addition to a disappointing outcome for Diaz, he was also displeased with the general voter turnout for Hidalgo County.

However, Diaz said he is proud of bringing in young, first-time voters for this election.

Team Liberty member and incumbent Pct. 3, Place 2 Justice of the Peace Marcos Ochoa will enter into runoff with Arnaldo Corpus, leading the race with 49 percent of the vote. Corpus got 37 percent and Leo Gonzalez captured only 14 percent – just enough to force a runoff for Ochoa. Ochoa was only 142 votes shy of winning the election outright.

Incumbent Place 1 Justice of the Peace Luis Garza handily defeated his opponent Jozabad “Jay” Palacios with 73 percent of the votes.

There will also be a runoff for 449th State District Judge between incumbent Jesse Contreras (incumbent), who garnered 41 percent of the vote and Renee ‘Rena’ Rodriguez-Betancourt, who had 45 percent. The other challenger, Jaime Aleman got 14 percent.