Sure it’s still early in the season, but the Mission Lady Eagles softball team is hot…hot…hot. Take for example their Tuesday night game against the Palmview Lady Lobos. Mission scored five runs in the first, seven in the second, one in the third and two in the fourth, to take a 15-0 lead in the bottom of the fourth inning and invoke the 15-run rule bringing the game to an end.

In their District 30-6A opener against the McAllen Lady Bulldogs last Tuesday evening, the Lady Eagles didn’t put on such an impressive offensive display but they didn’t have to. That’s because while the Lady Bulldogs limited the Lady Eagles to single runs in the first, third and fourth innings, Mission held McAllen to only two runs, both in the first inning, to get their district schedule off on the right foot with a 3-2 win. 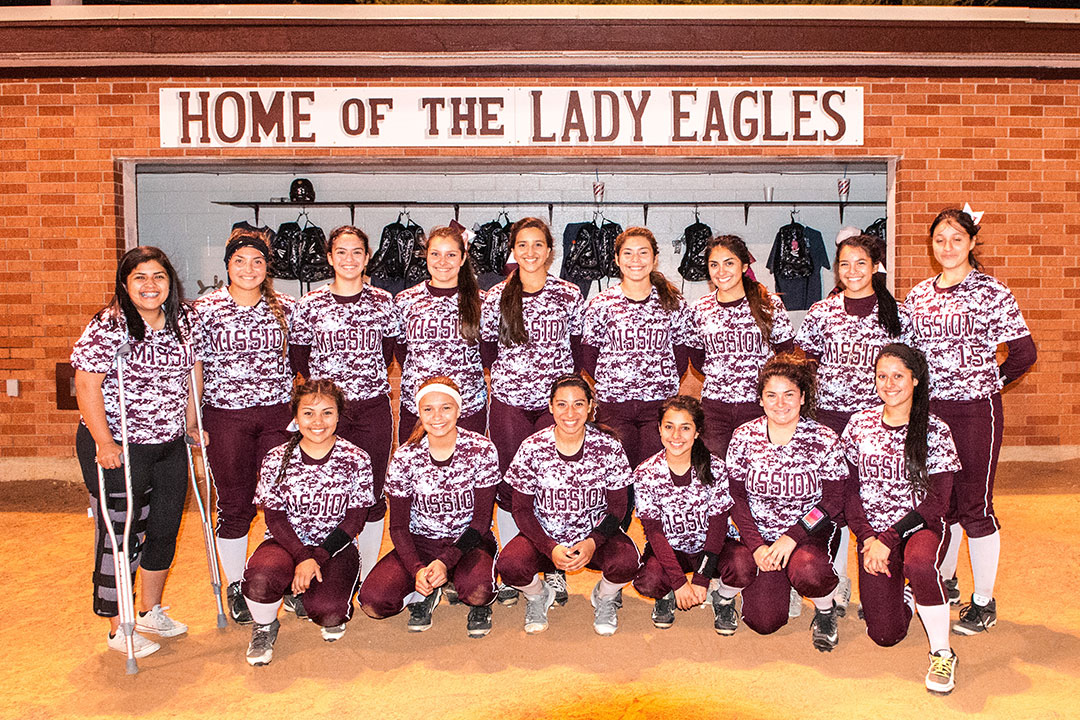 While getting off to a good start is always a plus, the Lady Eagles’ second-year head coach Reuben Trigo is well aware of the fact that a good finish is much more important; case in point, Mission’s 10-2 district record last year followed by a quick, first round exit from the playoffs.

“We did not like the way our season ended last year but we have eight starters returning this season so we are expecting great things,” Trigo said. “Our district is going to be extremely tough because it seems as if everybody is returning seven to eight starters. However we are looking forward to the challenge; in other words no excuses.”

“My girls are hungry to make the 2016 season a successful one,” added Trigo. “My seniors are ready to step up and lead this team but it all won’t fall on their shoulders. We have a good crop of juniors, sophomores and even freshmen that are ready to make a difference in our program as well.”

As for what went wrong in the bi-district round of the playoffs last year, Trigo said, “We played great defense but we couldn’t hit the ball and we lost to Laredo LBJ 2-0. But it’s not as if we lost to some pushover team. LBJ went on to defeat Brownsville Veterans Memorial before losing to the same San Benito team that went to state.”

If the 2-0 Lady Eagles (11-3 overall) are going to make it two trips to the playoffs in as many years under Trigo, they are going to have their work cut out for them.

“In my opinion, McAllen Memorial is the team to beat in our district,” explained Trigo. “La Joya is returning everybody and I believe that they are going to be a sleeper team. And while nobody is talking about them, the Nikki Rowe Lady Warriors are last year’s champions and as such they are the team that everybody’s going to be chasing.”

As for which of his players he is counting on the most to lead his team back to the playoffs, Trigo said, “I have three seniors that have been with us four years. Kazzy Rodriguez is our pitcher, Alyssa Olivarez is our shortstop and Briana Cantu is our catcher. They make us strong up the middle and give us a great nucleus to build our team around. They’re also great examples for the rest of the team.”

“I’ve just got a bunch of girls that want to win,” added Trigo. “They make my job a lot easier. I come out here and make sure they know what they have to do and they go out and take care of business on the field. When you have good seniors, like I have, it makes things a lot easier for you.”