Four La Joya ISD students shredded their criminal files on Monday. The students were arrested in October 2015 – three for possession of marijuana and one for theft. After completing the 1st Offender Program with the La Joya ISD Police Department, the students were allowed clear their record.

The program consists of a six-week training and a 90-day probation period. Both the students and their parents are required to attend the training where they go over topics such as the consequences of the student’s actions, who else they’re affecting, life skills and substance abuse resistance. 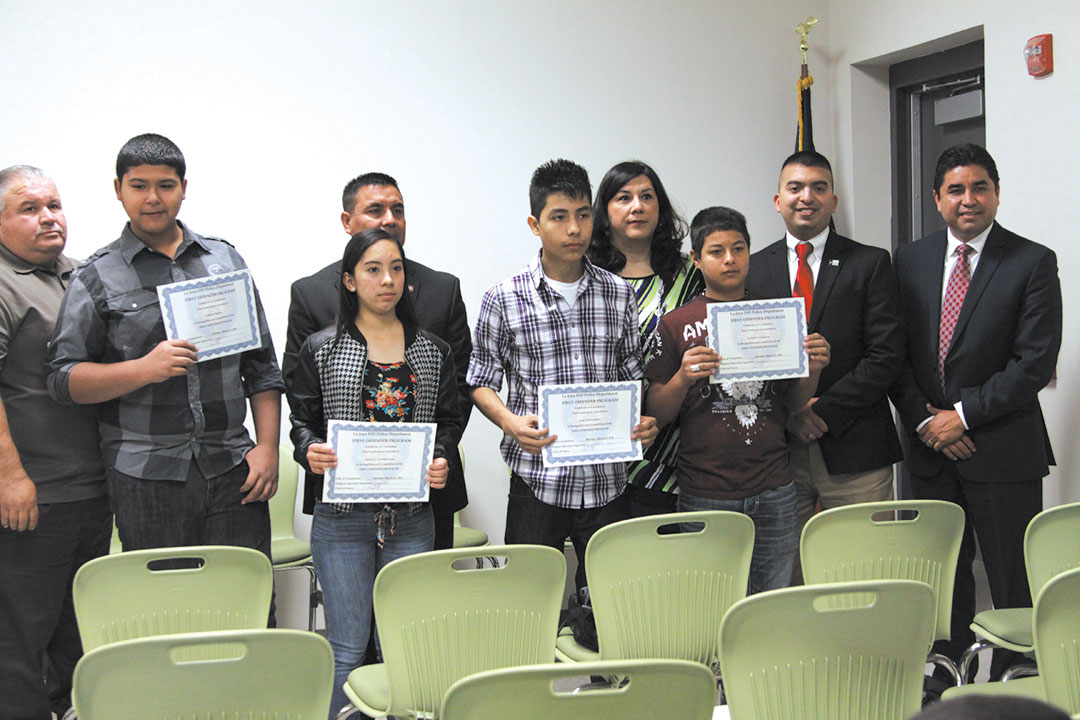 During the training, the students are required to write an apology letter to their parents and read it aloud to them in order to receive credit. In addition, they create a parent-student contract that states what steps have to be taken in order to restore the relationship.

“We realize that when something happens, especially an arrest, things change at home,” Officer David Torres said. “We want to be able to rebuild those bonds that might have been broken, encourage more interaction and make it something that is a norm for them.”

During the probation period, Torres is monitoring at-home and classroom behavior by meeting with the family and teachers.

If the student attends all the classes and isn’t arrested while on probation, they receive a certificate of completion and can shred their entire criminal file. In addition, the chief clears all information from the department’s computer database.

Page-by-page, the four inaugural graduates slid their documents into the razor-toothed slot as the 30 other students who are still in the program watched. There are currently nine students in the 90-day probation and 21 in the six-week training.

“We mean what we say and we’re going to do our best to make sure that you have a fair opportunity,” Superintendent Alda Benavides said. “Everyone makes mistakes, but it’s only a mistake if we don’t learn from it. When you don’t learn from it, it’s no longer a mistake.”

Gilberto Herrera, who was caught smoking marijuana on campus, sat looking at his graduation certificate after the ceremony concluded.

He said he wanted to quit the program because he didn’t like to attend the Saturday morning classes, but he wanted to clean his record.

Torres said that when Herrera began the program he told the officer that he didn’t expect to continue his education after high school. But when the discussion of scholarship and grant opportunities arose, the student’s views changed. Now, Herrera says he would like to attend the University of Texas Rio Grande Valley and enter the welding or electrical fields.

As the La Joya ISD police officers have cases coming in, they comb through files, see who qualifies for the 1st Offenders Program and approach the eligible students.

Students must be between 10 and 16 years old. Only those from a Class B misdemeanor to a state felony charge can enter the program, but students arrested for violent crimes are non permissible.

La Joya is the only school district in the state to implement this type of program.

“It’s not about us arresting kids. It’s about us helping kids,” Chief Raul Gonzalez said. “Our commitment to (the students) is that we’re going to do everything in our power to help them succeed.”