To say that the Palmview Lobos and the La Joya Coyotes baseball teams have a love/hate relationship would be a half-truth. There is definite animosity between the cross-town rivals, which was on full display at the La Joya Baseball Complex when they faced off against each other Tuesday night, but if there is any love between them, they kept it very well hidden as several hitters were hit by pitches and the umps were delegated to peace-keeping duty on more than one occasion Tuesday night. After the game, the Lobos’ players and coaches had to be escorted out of the ballpark and onto their bus by security personnel just to be on the safe side.

The fact that the Coyotes handed the Lobos a come-from-behind, 13-12 first round defeat may have had something to do with the acrimony-on-display Tuesday, but with the Lobos jumping out to an early 6-0 lead with three runs in the first inning and three in the second, the Coyotes seemed to take their frustration over being shown-up in front of their home crowd out on the Lobos; especially their hitters. 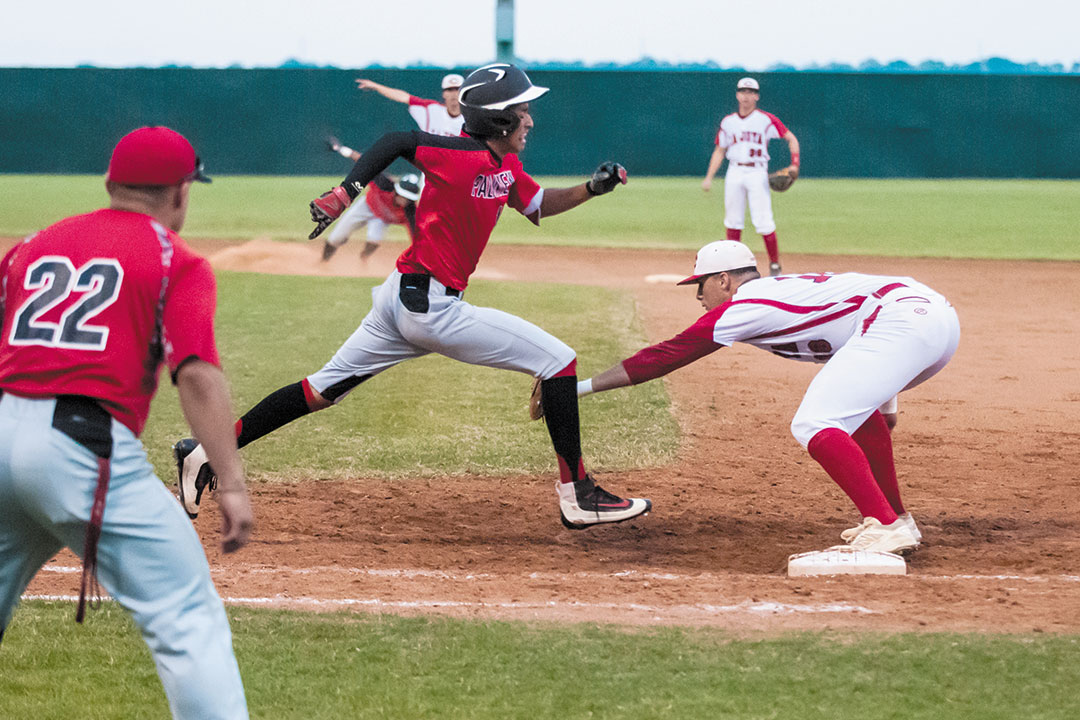 Thankfully there were no bench-clearing brawls, nor were there any direct altercations between any of the players. However, there was plenty of yelling and finger-pointing going on between the two dugouts; some among the coaches. When all was said and done, however, the Lobos held on to their early lead as they avenged their first round loss by a score of 10-2.

Palmview junior right-hander Leonel Perez discussed the importance of Tuesday night’s win shortly after walking off the mound with his complete game victory.

“It’s a really big win for us,” Perez said. “We’re coming off a loss to Mission so we wanted to bounce back against the Coyotes and emerge stronger than ever. Our goal right now is to keep on winning and as long as we keep playing like we played tonight, we will be able to accomplish that goal.”

As the only head coach the Lobos have ever had, Manuel “Ricky” Garcia has led his team to the playoffs six times in eight years. With several of those post-season appearances including district championships and runs deep into the playoffs, Palmview players and their fans have grown accustomed to not only making the playoffs but entering them as one of the district’s top seeds. Had the Lobos lost to the Coyotes Tuesday night, they would’ve been looking at the real possibility of being the district’s third or fourth seed or even missing out on the playoffs altogether. Now, however, the Lobos have a realistic shot at repeating as district champs.

“We have a lot of baseball to play yet, but there are a lot of great teams in our district,” Garcia said. “It’s going to be tough but we have four more games to play and we have to play them tough. From here on out we have to play everybody like it was a playoff game.”

With the Lobos’ first-round loss to La Joya still fresh in his memory, Garcia expressed what the main difference was between that game and Tuesday night’s rematch.

“Tonight we eliminated the errors that cost us that first-round game,” explained Garcia. “That helped us to play better. What it comes down to is that if we eliminate errors, we’re going to win games.”

The games remaining on Palmview’s district schedule include a game at home against Nikki Rowe tonight followed by a game at Juarez-Lincoln, another home game against McAllen Memorial and their district finale at McAllen High. With the 7-2 Bulldogs currently holding on to a one game lead over the Coyotes and a one-and-a-half game lead over the Lobos, the district title could very well be on the line when the Lobos and the Bulldogs meet up.