The first students to call themselves Mission Collegiate Knights graduated from the early college high school on June 2.

Ninety-five students received their high school diploma from Mission CISD, but 46 of them had already earned their associate’s degree from South Texas College earlier in May. Every student graduated with at least 18 hours of college credit, and as a whole, they earned a total of 5,669 college hours. 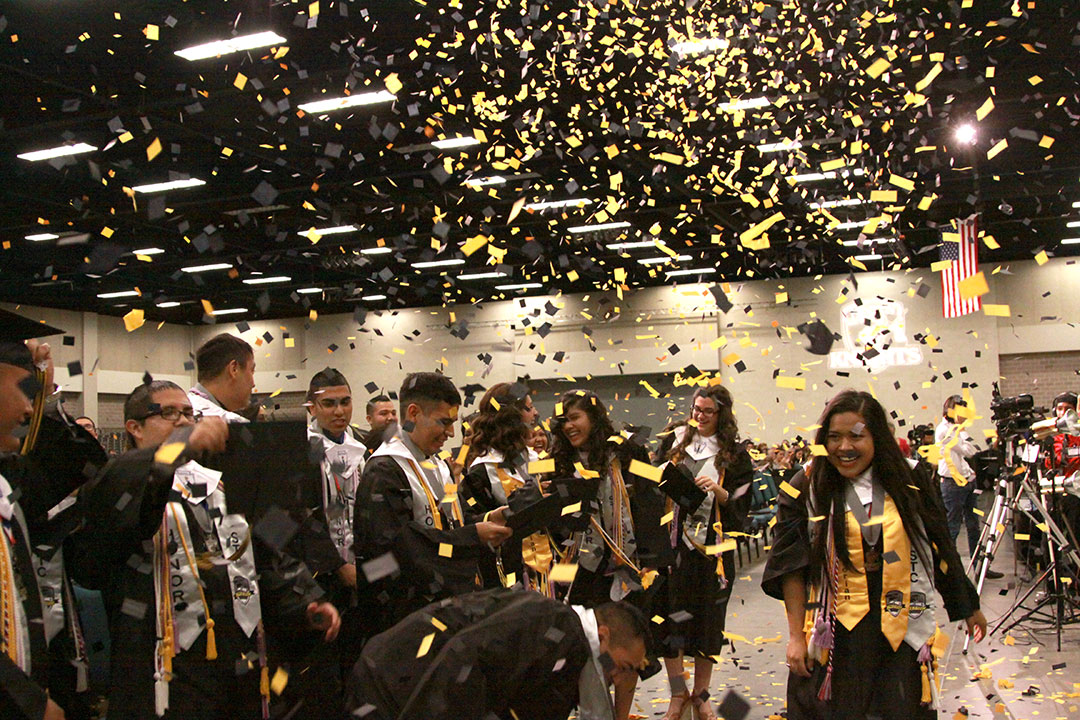 Mission Collegiate caters to first-generation college-going students, who may also have a low socioeconomic background. Students have the opportunity to begin taking college courses their freshman year and graduate with up to 60 college credits and an associate’s degree.

According to a 2013 study by College Board, first-generation college students are more likely to delay college entry, need remedial coursework and drop out of college.

“Statistically, we are not supposed to graduate from college, yet, 46 of us currently have an associate’s degree,” Valedictorian Bianca Rodriguez said. “We are the first graduating class of Mission Collegiate High School, and we are not a statistic; we’re trailblazers.”

Rodriguez reminisced through each of the class’s four years. Freshman year was the simplest, she said, while sophomore year was a blur. Their junior year the students took the most college and AP classes, and fought for the best class rank. It was also the year MCHS earned the bronze award in a U.S. News & World Report ranking of high schools in the nation. Their senior year, the campus earned the award again.

The class of 2016’s senior year was also the year the Mission Collegiate school building reached its completion. Up until then, the students had been attending classes in portable buildings.

Four years ago, Principal Orlando Farias was in a portable building with three borrowed white tables and three borrowed laptops for himself, the school counselor Zina Acevedo and his secretary Marisa Femat. They had little more than two months to hire a teaching staff, prepare the portables, which would act as classrooms, create schedules, order furniture, create and prepare for a summer bridge program and create a college culture.

“Over the years we’ve added tremendous staff that takes ownership of the successes and failures of our students,” Farias said. “I can tell you every single moment and preparation of work led us to this evening, and it was worth it.”

Salutatorian Joselyn Rodriguez admitted that the thought of no longer having her teachers around to push her to do her work or to tell her what classes to take is scary. But she urged her peers to take their new beginning in stride and remember Mission Collegiate as their home.

“I was so excited about this graduation because I know how it’s redefined lives and it’s going to continue to do so,” Superintendent Ricardo Lopez said at the ceremony. “So, when you’re out there, be Mission proud, be Knight proud. You know you’re special, you already changed the course of history and the best is yet to come.”