When she was just 10 years old, Rosalindo Elliot was transported to a new world once she first stepped into Mission’s Border Theater.

“It was the first time I’ve ever been to any movie theater and I still remember how welcoming the smell of popcorn was,” the retired teacher’s aide said as she pointed to different parts of the lobby. “I have so many wonderful memories of this theater, I was practically brought up here as my family and I came here at least three times a month to watch movies.” 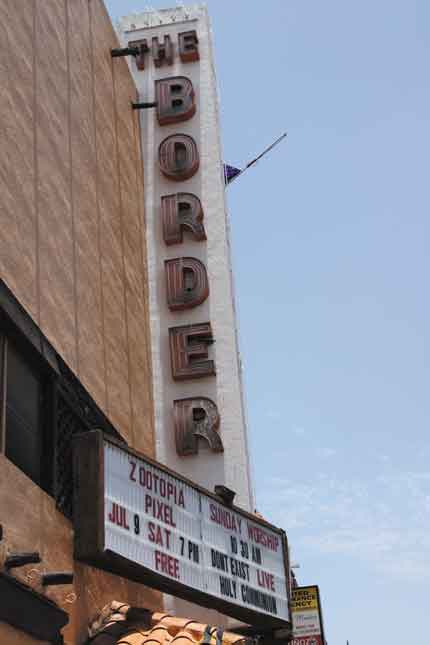 Elliot still regularly visits the theater and makes new memories 49 years later. Now, she does it as a choir singer for New Hope at the Border, the Methodist church that holds weekly services in the theater.

“It’s very fulfilling being back here,” she said. “Even though I’m now a grown woman, I’ll always appreciate the little girl who loved coming here and making her happy whenever I visit.”

The weekly church services is one of many events that go on in the Border Theater throughout the year. These events include free movie screenings every Saturday during the summer months, concerts and movie premiers. According to the theater’s co-owner, Joseph Ramientos, there’s a common misconception that the theater serves as a full-time church.

“During our screenings there’s always at least one person surprised we’re still showing movies and say ‘I thought you guys were closed,” to which I reply ‘Our sign says otherwise,’” the 59-year-old said.

The Border Theater, which opened in downtown Mission in 1942, remains unchanged according to Ramientos, who also serves as the pastor for New Hope at the Border. The theater still houses nearly 400 seats, many of which were the original seats from when the theater first opened.

The walls of the theater are still adorned with carpet ed murals that depict the history of the city of Mission, and the towering neon marquee stands outside the theater, beckoning the public to see what events are going on.

The only major new addition to the theater is a large, wooden cross that sits at the front of the auditorium as assorted flags with different Christian embellishments are scattered around the top of the stage.

Ramientos, originally from the Philippines, oversees a congregation of at least 40 people every Sunday morning. His journey to the theater started in 2005 when, after living in Los Angeles for more than 20 years, he and his wife decided to look for a place to invest in and eventually came down to the Valley.

“My wife, Erma Ramientos, is in real estate and she heard from a friend how the Valley is thriving so we decided to take a look for ourselves,” he said “We eventually bought the Border Theater from the previous owners in 2008 under the agreement that we would use it as a movie house and we’ve been doing so ever since.”

Ramientos would eventually start renting out the theater to house his ministry in 2011, opening up his theater to be rented for other events, which he sees as vital for keeping the theater “alive.”

“As far as I know, we’re the only historical movie house in the Valley,” he said. “We want to preserve the history of this theater because it’s part of the city and we can provide a variety of entertainment to the public.”

Most of the events housed in the theater are free, with most of the profit the theater makes coming from donations, reservations and concessions the theater sells during their events.
Free movie screenings, which according to Ramientos, remain a big draw. Recently, the theater screened the Christian drama “War Room” and the Disney blockbusters “Star Wars: The Force Awakens” and “Zootopia.” The next screening lined up for the Border Theater is for the Adam Sandler action film “Pixels,” set for July 16.

To host these screenings, Ramientos rents the DVDs from a nearby Blockbuster and pays a licensing fee to the film’s distributor, which typically costs $100 to $125, to screen the movie in the Border Theater.

Other events lined up for the theater include hosting a music recital for Mission’s Crescendo Music Institute set for August 3 and 4 and the Big Band Jam, a monthly concert series for winter Texans that runs from October through April.

Despite being greeted with some discouragement when he and his wife first bought the theater, Ramientos ultimately doesn’t see the Border Theater going away any time soon.

“When we first bought the movie house, many of our neighbors in nearby businesses told us we wouldn’t last two years,” Ramientos recalled. “It has been eight years and we’re still thriving. The Border Theater is still here and we plan on keeping it that way. We have no plans of selling, renovating or changing it in any way, it’ll remain a movie house entertaining the public for the foreseeable future.”