A national championship now resides in the Rio Grande Valley as Dynamo STX Academy U17 Girls were victorious last week in Tulsa, Okla. where they were one of four teams competing for the US Youth Soccer 2016 National Presidents Cup. Facing teams from Nevada, New Jersey, and Missouri on the biggest stage in youth soccer, the team from south Texas would be the last to remain standing when it was all said and done. 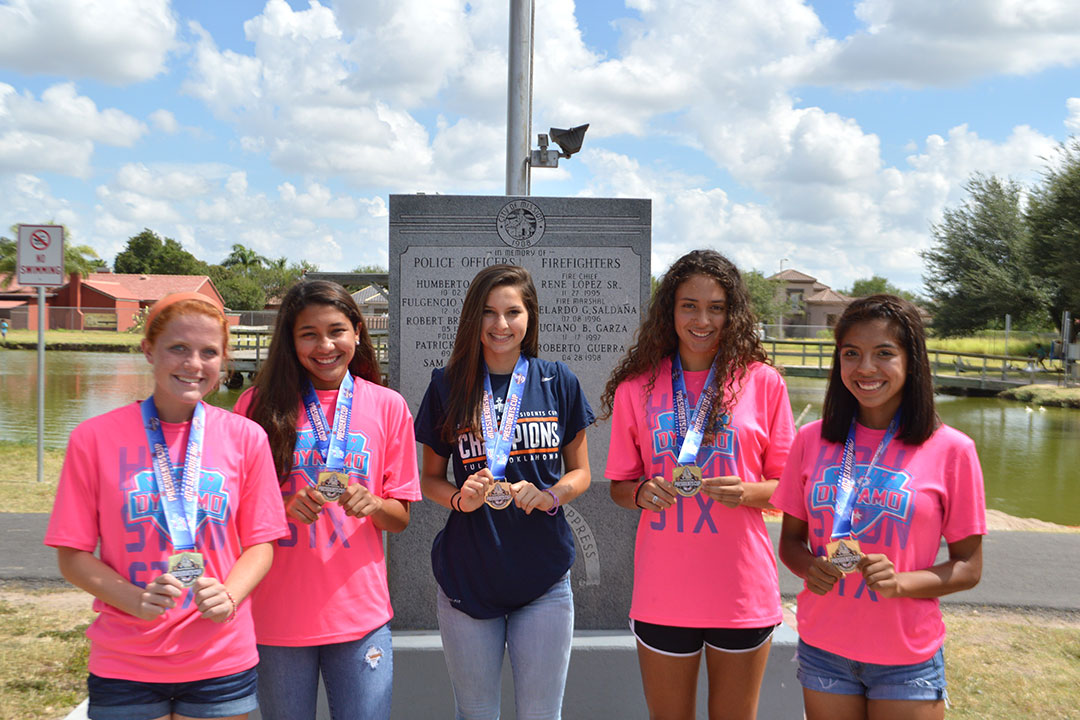 “It’s a huge deal for us and not just for us but for girls that are younger than us that look up to us. There is talent in the valley and I think people are seeing that we are a force to be reckoned with,” said Watson. “It’s the recognition we finally deserve and it’s a good feeling to know that we’re able to provide that for everyone in the valley.”

After dropping the first game of the final four tournament 0-4 to FC Warriors Blue 99 from Nevada, the team needed to turn things around quickly for a chance to finish in the top two for a spot in the championship game. The girls rallied in their second and third games to draw 2-2 against KC Prime Academy Navy 98/99 of Missouri and win in dominant fashion with a score of 4-0 over the Union Lady Dragons of New Jersey to advance to the championship game setting up a rematch against FC Warriors Blue 99.

“It was a great feeling knowing we were one of the top four in the nation. It was an overwhelming feeling too. I was very nervous the first game and it showed but we were able to get our game back,” said Sharyland forward Marinaro, who scored two goals in the first three games.

The Dynamo would need to be on point to avenge their 0-4 loss to the FC Warriors Blue 99 in the final game. The team from Las Vegas went undefeated in their first three matches by scoring a total of seven goals without allowing a single goal heading into the championship match against the Dynamo.

“I told the girls the one thing in our favor is the other team thinks we’re poor because they just beat us 4-0, so mentally they already think they’ve won this thing, so we needed to use that for our advantage, which I think we did. We never doubted ourselves; we never said we were going to be third or fourth. After the first game everything worked to what we were trying to do, it’s sort of like the stars aligned,” Hamilton said.

After a competitive, scoreless first half of play from both teams, Dynamo STX kicked their game up another level scoring three goals in the en route to a 3-0 victory using breakaway counterattacks to stifle the FC Warriors Blue 99 physical style of play. Dynamo STX delivered the FC Warriors Blue 99 their only loss by finding the back of the net three times after the Warriors had not given up a single goal in three and a half games.

Reyes, who scored two goals in the tournament and scored the first of the championship match, was named Most Valuable Player. She explained how her team remained focused on the task at hand, winning a championship, while their opponents may have started celebrating a little too early.

When the final whistle sounded, teammates, family and friends of the Dynamo rushed the field, joining arms in a circle, chanting and jumping in celebration of the team’s hard earned National Presidents Cup victory.

“It was an awesome feeling to know that we’re the best in the US. The feeling really soaked in during the trophy ceremonies. I was just in disbelief when the final whistle blew.” said the Pioneer defender Vasquez.

The end of the club season for Dynamo STX Academy U17 Girls ends on the highest note possible after putting in 10 months of work to accomplish this common goal. Now, the team can sit back and reflect on their journey to becoming national champions before they’re back at it in September for their next season of club play and in January when soccer season begins at the high school level.

“Knowing that we wake up every morning, go to soccer practice, then in the afternoon we practice again. It’s a lot of work but in the end it’s all worth it. It was really surreal, I didn’t think it was possible but dreams come true,” said Sharyland High’s Cano, who was named Most Outstanding Goalkeeper for her play at Nationals. “It’s been really amazing. We’re all from different parts of south Texas and all coming together as one family, it’s really amazing how much we’ve pulled of.”