The smell of BBQ hung in the air at the grounds of the Mission Chamber of Commerce as nearly 1,000 people attended the chamber’s inaugural cook-off and car show.
Held July 30, the Chef’s BBQ Throwdown and Car Show featured 19 chefs from restaurants throughout the Rio Grande Valley presenting barbecue chicken, beef brisket and pork ribs as they battled it out for a $2,500 prize, and the hearts of hungry attendees eager to sample from their menu. 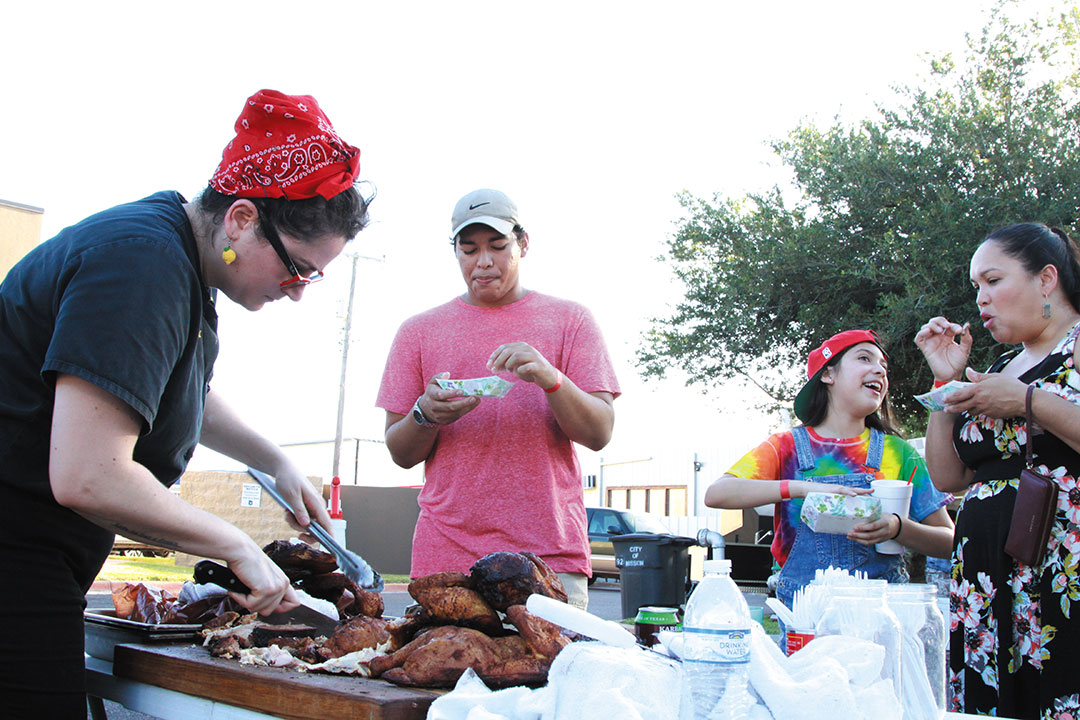 Rachel Houpt, an organizer for the chamber, said the event brings two worlds together – upscale dining and the small business atmosphere the city of Mission is recognized for.

“Mission is known for agriculture and small business. Now we’re introducing fine dining to the city and showcasing our city to these restaurants and letting the public be aware of these places at the same time,” the 29-year-old said. “It’s a breath of fresh air that helps our goal of stimulating growth into the city.”

During the cook-off, competing restaurants were also allowed to bring in their own twist to the food. PJ Pies, a McAllen pie shop, paired all their meats with a slice of their signature bourbon chocolate pecan pie and even offered smoked lavender salmon tacos as an alternative to the meats other restaurants were offering.
Aside from the cook-off, the Chef’s BBQ Throwdown and Car Show raised funds for the chamber’s new nonprofit organization Mission Prosperity Ventures Inc. The fundraiser will go to $1,000 scholarships for five seniors from each high school in Mission and Sharyland CIAS who are pursuing a degree in ESTEAM – Entrepreneurism, Science, Technology, Engineering, Arts and Mathematics.

For Mission Chamber CEO Josh Stockel, the reception he witnessed by attendees during the throwdown was enough of a sign that city residents enjoyed being introduced to the idea of upscale restaurants in the city.

“We’re exposing our city to these chefs from out of town to show them that there is a unified desire to see more of them here,” he said. “There’s no reason for Mission to not have this kind of setting. Our city is growing and we have to nurture that growth.”

For Javier Luna, a chef with the Mexican restaurant Zamora’s, the cook off was also beneficial for restaurants as they interact with people who may never have heard of them.

“We’re reaching a new clientele here and we’re actually seeing people who have heard of us but have never gotten the chance to eat with us until now,” he said. “This kind of exposure can only lead to more growth as people receive a change of taste.”

Zamora’s ended up taking home the grand prize after winning first place in the categories of chicken, chef’s choice and second place in ribs and beef brisket.
Jesse Cantu, a retired mechanic operator, was one of the attendees for the event. He also agreed that more restaurants, especially in Mission’s downtown area, would be a change for the best.

“My family and I eat out a lot and after a while it becomes such a hassle traveling to McAllen just to eat something different,” the Palmhurst resident said. “When Applebee’s and Panda Express opened near Palmhurst, we saw how quickly the area changed and it’d be nice to see that kind of effect in Mission. It’s a beautiful city, we just need more variety.”