Meet the Eagles Night might be an event started by former Mission Eagles’ head football coach Mario Pena but as his successor, Koy Detmer has embraced it by continuing what is quickly becoming a tradition at Mission High School. And judging by the fact that hundreds of Eagles fans showed up at Tom Landry Stadium last Thursday night for the 2016 version of this event, Meet the Eagles Night seems destined to stay.

Last week’s event was not solely about the Eagles football team; the Mission High band, cheerleaders, High Flyers, boys and girls cross-country teams, Lady Eagles volleyball team and the athletic trainers were all included in the festivities. However, the football team did take center stage. And with the Eagles’ season kicking off at Tom Landry Stadium tonight, there was an air of optimism about this year’s edition of the Mission Eagles football team among those in attendance.

A 1967 graduate of Mission High School, Maria Martinez Nino remembers the Eagles’ glory days very well. And while her excitement about the 2016 football season does have something to do with the fact that her grandson, Sebastian Sanchez, is a member of the Eagles football team that is not the only reason she is looking forward to this season in particular.

“While I cannot speak 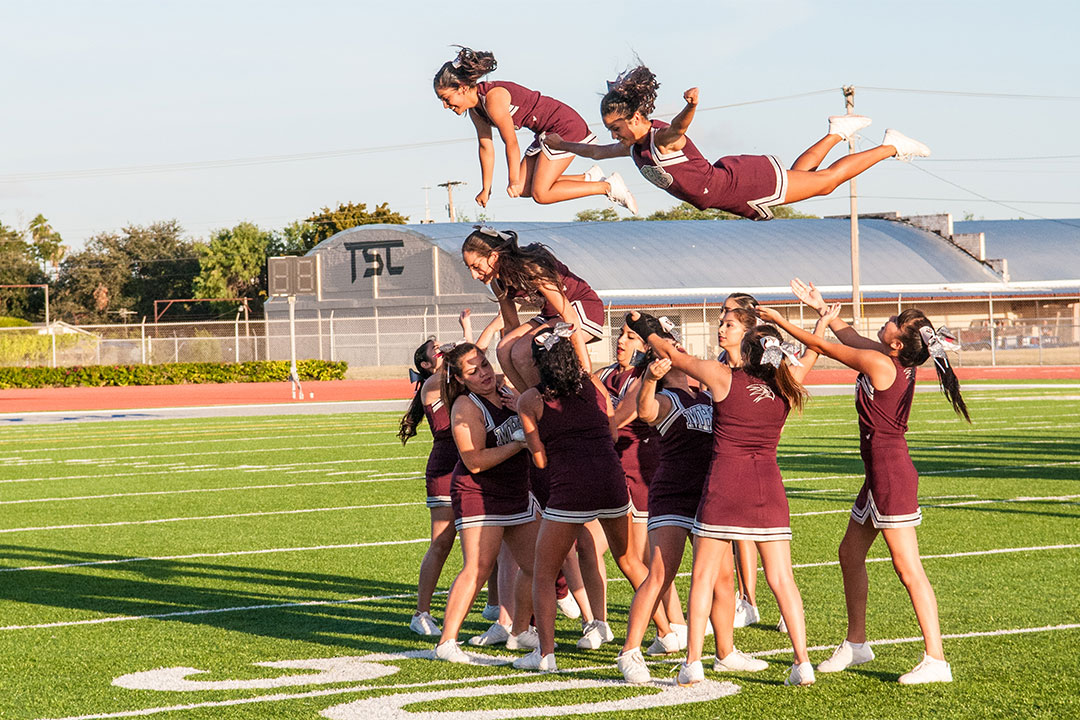 for the others, I believe that the excitement about this Eagles’ football season has to do with the hiring of Koy Detmer,” said Nino. “He is part of the team now, like he was before when he was a player.

Nino, who is now a season ticket holder is also planning on following the caravans to the Eagles’ away games.

“Hopefully they’ll do well this season and make the playoffs,” shared Nino. “I know that years back the Eagles had strong teams and hopefully Coach Detmer will bring that strength back again.”

Claudia Trevino, a 2002 graduate of Mission High School, was also in attendance at last Thursday’s Meet the Eagles Night. Other than a two-year period in which she did not purchase season tickets, Trevino has attended every Eagles game since graduating.

When asked if she thought the excitement in the air had to do with the hiring of Koy Detmer, Trevino said, “Since he was from Mission, I guess his hiring is bringing back some of the older generation that saw him play. They seem to be coming back to support the Eagles.”

As the current president of the MHS Soaring Eagles Football 2016-2017 booster club, Ramiro Garcia is not a Mission High graduate but his son Juan Garcia, a 2015 MHS graduate, played football for the Eagles. While Garcia does believe that Coach Detmer’s background at Mission, at the University of Colorado and with the Philadelphia Eagles has something to do with the optimism over the upcoming Mission Eagles football season, he hopes that is not the only reason.

“Hopefully the new coach is not the only reason we have more people out here this year than we had last,” said Garcia. “I’m hoping that they’re out here to support the Eagles football team.”

As for the fact that Mission Eagles football season ticket sales are up this year, Garcia said, “We have been spreading the word around that the season tickets are available for purchase and we have gotten some people out there, but that’s always the job of the booster club. Hopefully by us spreading the word and Coach Detmer being here, we can get more fans into the stands.”

As for how Detmer himself felt about the turnout and support at Thursday night’s event he said, “It’s awesome. This time of year it’s great to feel the energy and excitement in the air and to see all the fans come out to support the team. It means that football season is here.”

“We as coaches are excited about the season,” added Detmer. “For myself, getting to come back and coach where I went to school and all the great memories I had here. We’re fired up for this season as well.”