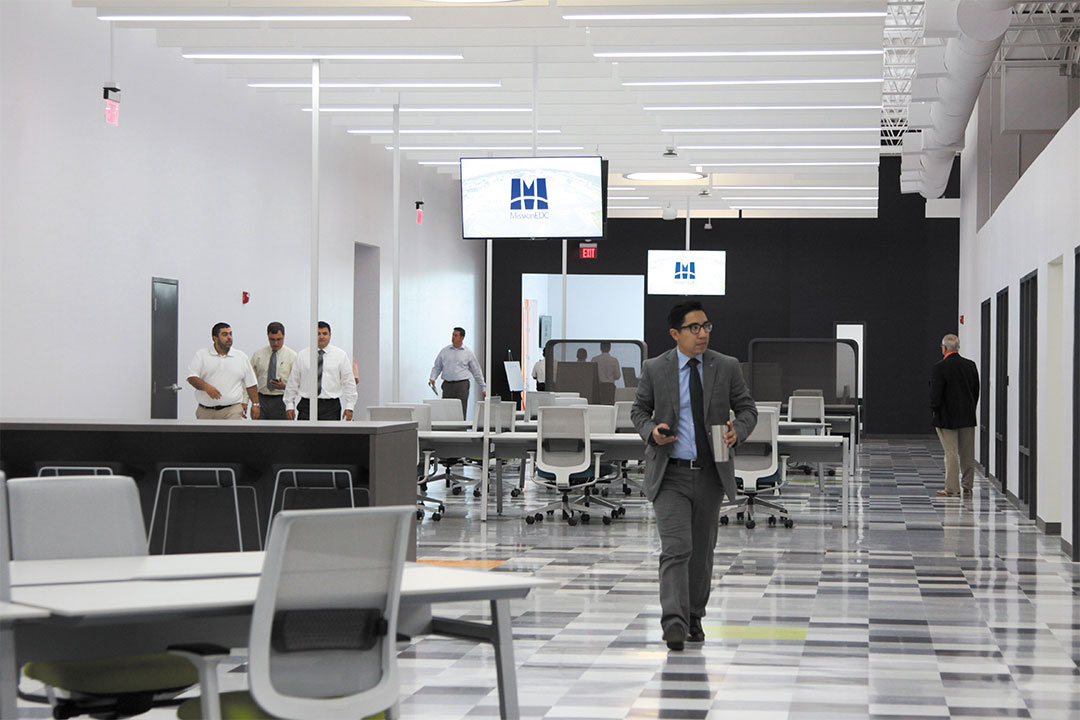 It’s been a long time coming, but a change has come for the city of Mission.

For the last five years, the Mission Economic Development Corporation has worked to reshape the way people think about the community and the way people think about economic development, according to CEO Alex Meade. With the idea of promoting entrepreneurship, education and technology, the EDC planned to build the Center for Education and Economic Development — a coworking space for business professionals.

Two years ago, the plan for the CEED was set in motion, and Tuesday the building was finally revealed to a select few members of the community in a private ceremony. City and state leaders, members of the local school districts and representatives from the Texas Workforce Commissioner’s office joined the MEDC team in touring the halls of Mission’s new business hub.

The 55,000-square foot location contains classrooms, computer labs, offices, an auditorium, sound room, conference rooms, a coffee shop and 285 open floor seats. Some of the organizations that will be housed in the CEED include Sylvan Learning, Schreiner University, Teach for America and various start ups that have come out of the Ruby Red Ventures program. Meade said the CEED may be one of the most technologically advanced buildings in the Rio Grande Valley.

Additionally, one of the programs that will be housed in the Center for Education and Economic Development is an intense, 12 week coding course for adults that was developed by Code RGV. At the opening ceremony on Aug. 24, the program received a $75,000 grant from Texas Workforce Commission, which will provide 750 hours of code to 25 individuals. When the adults finish the program, they will be certificatied full-stack web developers.

Texas Workforce Commissioner Julian Alvarez, who is also a longtime friend of the EDC CEO, said the grant is the only high-demand grant that was awarded in the Valley.

When the Mission EDC office underwent an overhaul five years ago, Meade explained that the EDC team realized it needed to shift its focus to supporting small business.

With that in mind, the Ruby Red Ventures, Code the Town, Enginuity and Etsy Craft Entrepreneurship programs were rolled out.

Ruby Red Ventures was developed to help local entrepreneurs create a business model and sustain it. Each year the Mission EDC awards $100,000 to the winners. In December 2015, locals Jennifer and Sam Shipp were featured on Good Morning America for an invention that was developed through the Ventures program. In July, two-time winner Pilar Gonzalez had her dip hit H-E-B shelves throughout Texas.

But through Ruby Red, the MEDC team noticed people weren’t incorporating technology into their businesses because they didn’t know how. With that, the economic development corporation partnered with Sylvan Learning and Border Kids Code to create Code the Town, which is offered to adults and students in the surrounding school districts.

More than 2,000 students have learned how to program computers and more than 2,100 technology apps have been created since 2014.

Enginuity was created to connect elementary students with local employer Royal Technologies, where they are exposed to engineering, design and manufacturing opportunities. The idea is to promote science, technology, engineering, art and mathematics or STEAM education.

The Etsy Craft Entrepreneurship wields people with the tools to start their own shop through the Etsy website. Similar to Ruby Red Ventures, the program teaches people how to develop and nurture their own company online.

“When we think about economic development, we think about bringing in a restaurant, bringing in franchises, bringing in a hotel, but we forget the fundamentals and Alex [Meade] has been able to hit those points every time,” City Manager Martin Garza said. “Education, entrepreneurship, technology, those are the three things that is going to be housed in this facility. We have been able to move forward from just bringing in businesses, but building a foundation that creates not only great futures in businesses but great leaders.”

But the Center for Education and Economic Development may not have seen the light of day if it wasn’t for Rafael Chacon, the building owner who invested $6 million into the project and didn’t see one single payment from the EDC for almost two years. &nbsp;

Chacon, a Brownsville native, was a friend of Meade’s who believed in the EDC’s vision enough to invest in the project.

“I always tell my…business partners, I want to do something that we can feel proud of,” Chacon said. “It’s not about the money, it’s something that our future generations can say ‘They pulled it off. They made it happen.’ I feel proud of all of us for what we’ve accomplished.”

Both the Texas Workforce Commissioner and Senator Juan (Chuy) Hinojosa said they are amazed at how the Valley has grown in the last 50 years. Alvarez described Mission’s transformation from an agriculturally-dominant community to a more technology based community as “nothing short of magical.”

“In the past, when we would recruit companies, they would come to the Valley because we could work well with our hands. We worked in agriculture or we can assemble things together,” Meade explained. “But I can tell you now that because of programs such as these, there’s going to come a point in time when companies are going to be looking not for what we can do with our hands, but what we can do with our minds. The things that are going on in this building are going to have a bigger impact than any company that we can recruit in the entire Valley.”