The Juarez-Lincoln Huskies (2-2) hosted the Edcouch-Elsa Yellowjackets (2-1) for some Thursday night football, each team’s final tune up game before entering district play next week.

After the Huskies opening drive stalled, the Yellowjackets struck first with theirs when quarterback Marco Aguinaga threw a 34-yard touchdown pass to receiver J.J. Flores to put Edcouch ahead early 7-0. 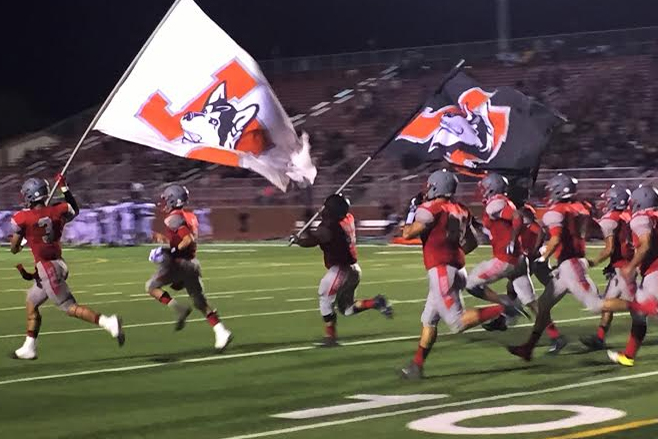 The Huskies responded with a methodical 73-yard drive on the ground led by quarterback Andrew Rodriguez and running backs Adonis Barillas and Benito Gonzalez. The drive ended with fullback Eddie Hernandez finding the endzone on a plunge from the 1-yard line to tie the score at 7.

The Yellowjackets would score again just before halftime on a 39-yard Aguinaga touchdown pass to take the lead over the Huskies 14-7 at halftime.

Huskies’ head coach Tomas Garcia spoke about his team’s play in the first half.

In the second half, the Yellowjackets wasted no time coming out with a kick return past midfield into Huskies’ territory. Aguinaga and La Maquina proceeded to score five consecutive touchdowns for a total of 33 points, missing an extra point and failing on a two-point conversion the process, to drive the score to 47-7 in favor of the Yellowjackets.

The Huskies made the last play of the game returning a kickoff for a touchdown with under five minutes to play. Garcia talked about the way his team approached this game and played in the second half.

“The most important thing is it’s all about fortitude, the ability to stay cool, calm and collected when the game is on the line and we weren’t able to do that in the second half. They were the better team tonight, very well coached team and we got to give it to them and learn from our mistakes,” Garcia said. “I’ve always said that this game right here was going to make us pretenders or contenders, and for two quarters I felt we were competitors but then we let them get the best of us.”

Even in the face of a large deficit, the Huskies (2-2) never quit, something that can help them grow stronger entering District 30-6A play next week when they face the Nikki Rowe Warriors on Friday Sept. 23 at La Joya Football Stadium at 7:30 p.m.