Before stepping outside his home, Ned Sheats always “slathers” himself in insect repellant to ward off mosquitoes.

No matter the time of day, the Mission resident says he applies the repellant in case the buzzing menace shows up. 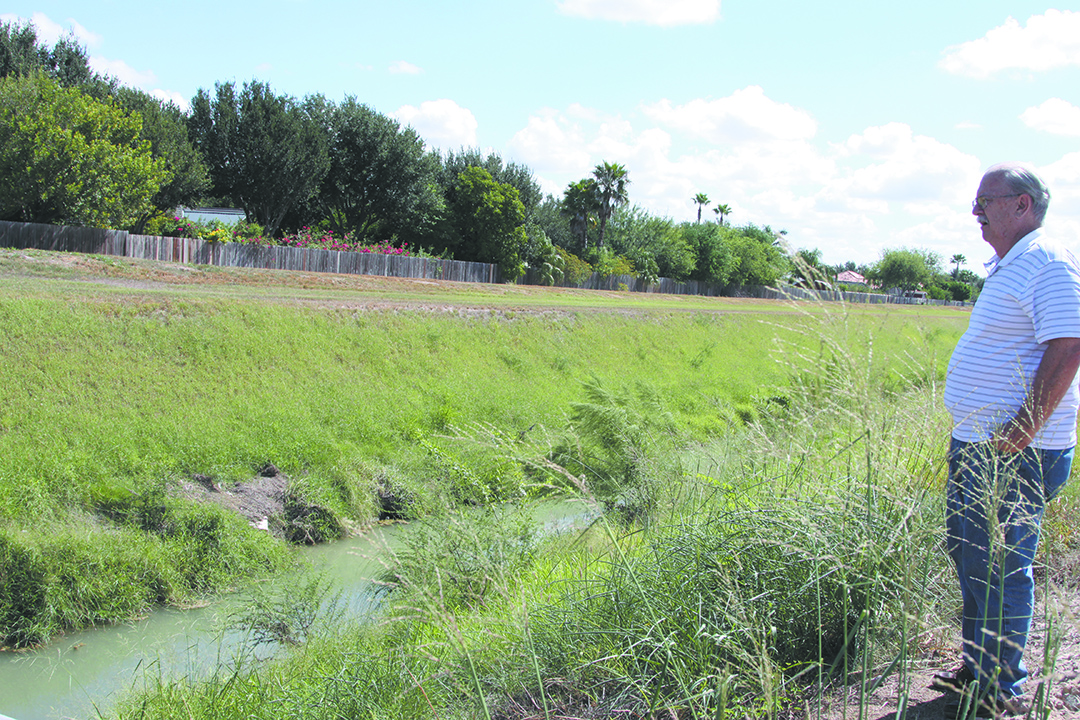 “I don’t like having to cover myself in DEET every time I have to go outside, I try to stay indoors as much as possible because of it,” he said. “I’m very reactive toward mosquitoes.”

Sheats, who lives on the 2000 block of East 29th Street, near Glasscock, says he has good reason to protect himself from mosquitoes on his own property. Within 100 feet of his backyard lies a drainage ditch that stretches from North Francisco Avenue to Bentsen Road. However, according to the Ohio native, the drainage ditch isn’t doing its job.

For the last three years, the drainage ditch has had standing water that never dries up. He said this never happened before the county widened the Mission Lateral ditch in 2013. Sheats believes that in the process of widening the lateral, the county made changes to the system that now prevent a miles-long stretch of the ditch behind his home from completely draining.

“The water (previously) would always dry up to a trickle,” he said.  “After straightening and moving the ditch. It doesn’t do that now. I’ve lived here 14 years so I know it’s different. Somehow, a stagnant pond that goes up and down this stretch of ditches has been created. If the ditch isn’t draining water properly, then something is wrong.”

Sheats worries that the stagnant water is resulting in more mosquitoes coming out of this “pond” — a hazard that could affect not just him, but any resident living along the ditches. He admits he might sound like an alarmist when he voices these concerns, but said he does it because he doesn’t see anyone else paying attention to the problem.

“I don’t like having to slather myself in DEET whenever I step outside,” he said. “But with all the news going on about the spread of Zika and with a few mosquito-borne illnesses we’ve had in the past, it’s clear that we’re now living in an age where we can get unpleasant or even life-threatening viruses from a single mosquito bite.”

Zika virus infections, which are spread through mosquito bites, have in recent months swept through South and Central America and the Caribbean, according to the Center for Disease Control and Prevention. Symptoms from the virus are typically mild and often go undetected, but infection can cause severe birth defects early in pregnancy and subtler ones later. It can also cause a progressive, usually temporary, paralysis called Guillain-Barré syndrome. There have been about 9,000 cases of Zika infection in U.S. territories (mostly in Puerto Rico) and more than three dozen locally-acquired cases in Florida.

To alert neighbors of this issue, Sheats mailed a total of 80 letters to neighbors down 29th Street to Taylor Road explaining the drainage situation. A postcard was included with the letter instructing neighbors to sign and mail it to County Precinct 3 Commissioner Joe Flores.

“Instead of having two ditches with a maximum of a trickle of running water we have now what is in effect a 6.6-acre pond of stagnant water,” a portion of the letter reads. “The result of this error in judgment, if your area is like mine, is that we can’t go outside for a minute without getting bit.”

A resident who did not want to be identified admitted he has noticed more mosquitoes in the area, a problem that led to him purchasing an electric fly swatter to fight the mosquitoes. Another neighbor said even though she hasn’t noticed many mosquitoes, her concern lies with the ditch retaining too much water.

“Whenever it rains more than five inches, water actually seeps from the ditch and reaches the edge of my garage,” she said. “I never noticed this problem until around a year ago and I worry that if it ever rains more than seven inches, the water might seep into the garage.”

County Response
According to Sheats, he’s contacted everyone from Hidalgo County Drainage District 1 General Manager Raul Sesin to the county health department regarding this issue to no avail.

“I’ve never had anyone even challenging me or saying ‘Standing water has always been there,’” he said. “I just want a dry ditch with no mosquitoes and for the county to realize that this is a problem where the bottom of the ditch is now full all the time with mosquitoes breeding. Why does the county always tell us to clear all standing water in our home, but they seem to not be doing anything with water in ditches?”

A spokesperson for Commissioner Joe Flores declined to comment on this story. When reached for comment, Sesin said he understands any concerns residents have regarding drainage ditches, but that ditches do regularly hold water.

“It’s not uncommon to have water in the system; not all of them will dry up,” he said. “We have routine maintenance checkups and nothing wrong has turned up. If there is water backed up, more than likely it is because there’s dumped trash somewhere in there that blocks the flow of the water.”

If there were any threats from mosquitoes, Eduardo “Eddie” Olivarez, chief administrative officer for the Hidalgo County Health & Human Services Department, says there are plans in place to combat mosquitoes.

“Even though there has been zero cases of localized Zika outbreak cases in Texas, mosquito illnesses in the Valley are feasible,” he said. “There are multiple agencies in the county who go into areas where there are larvae sightings and use larvicide to destroy the mosquitoes before they can pose a threat.” (For more on mosquitoes, read the related story “Is Zika coming to Hidalgo County?” available exclusively on our latest issue.)

Even with reassurance from the county and the lack of any threats from the standing water, Sheats said he’ll continue applying DEET to his body whenever he steps outside for the foreseeable future.

“I’m 72 years old. I don’t want to slather myself whenever I have to mow my own lawn,” he said. “Is this going to ruin my life? No, but we shouldn’t have to have standing water to be worried about. If the county keeps telling us to get rid of standing water, why can’t the county get rid of it in their own property? If it’s not good in our home, it’s not good for the ditches.”