The beginning of district play marks the beginning of the postseason chase. Every team starts with hopes to finish in the top four of their district to qualify for the state playoffs. For the Juarez-Lincoln Huskies, their focus is on a would-be first, back-to-back playoff appearances.

Junior free safety Elias Gutierrez was named to 30-6A First Team All-District as both safety and special teams’ co-return specialist in his sophomore campaign and looks to push this 2016 further than they’ve gone before.

“Making the playoffs was unbelievable for a school that’s been here for so long and we hadn’t made it. We don’t just want to play one game, we want to go far in the playoffs,” said Gutierrez, who locks down the last line of the defense from his safety position. “We have to set a tough tone. We have to stop everything and have that swagger when we’re out there.” 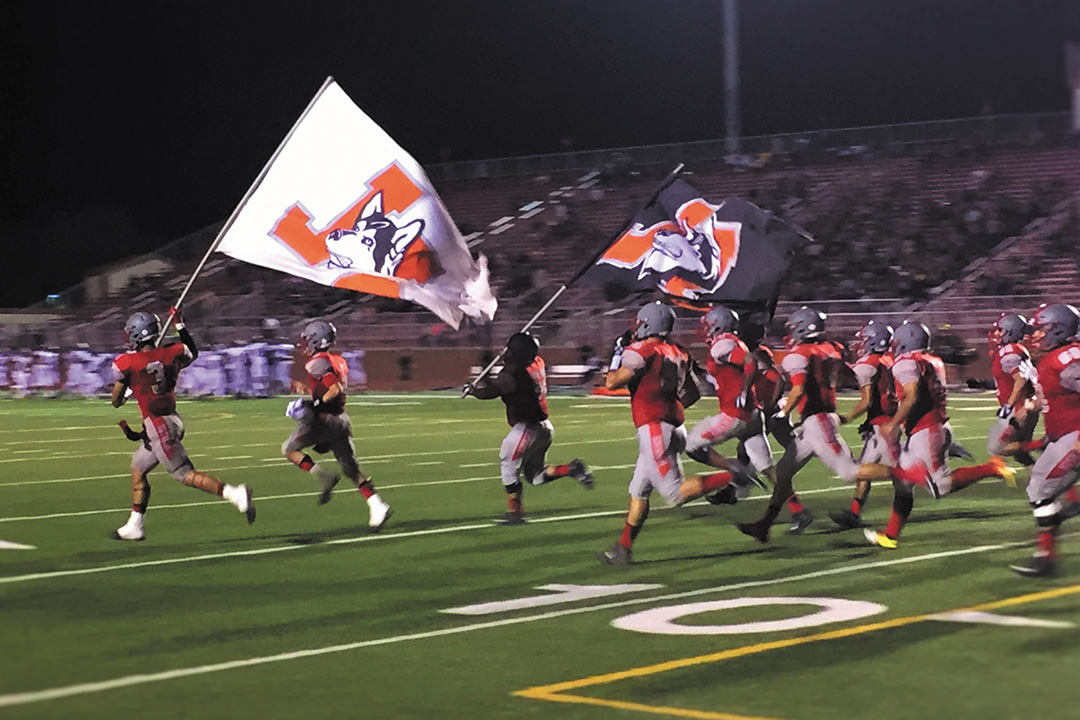 Head coach Tomas Garcia has his team at 2-2 in non-district action, aimed at preparing the team for the grueling district grind.

In their final non-district contest last Thursday, the Huskies fell to the Edcouch-Elsa Yellowjackets 47-14 in a game that was a tale of two halves.

The Yellowjackets opened the game with a touchdown strike from quarterback Marco Aguinaga to take a 7-0 lead. The Huskies and senior quarterback Andrew Rodriguez wasted no time responding with a methodical 73-yard march down the field that was capped off when junior fullback Eddie Hernandez punched in a touchdown run from the 1-yard line.

The Huskies went into the half trailing 7-14, but were outplayed in the second half as the visiting Yellowjackets scored 33 unanswered points. The Huskies never quit, as they racked up 197 rushing yards as a team and scored the final touchdown of the game with under five minutes left to play, a 94-yard kickoff return for a touchdown by sophomore running back Albert Martinez.

Coach Garcia talked about what his team needs to do in order to win big games like this, situations Juarez-Lincoln is surely to encounter in their district.

“The most important thing is it’s all about fortitude, the ability to stay cool, calm and collected when the game is on the line and we weren’t able to do that in the second half. They were the better team tonight, very well coached team and we got to give it to them and learn from our mistakes,” Garcia said. “I’ve always said that this game right here was going to make us pretenders or contenders, and for two quarters I felt we were competitors but then we let them get the best of us.”

Even in the face of a large deficit, the Huskies and junior running back Adonis Barillas competed every second, something that can help them grow stronger entering District 30-6A play as they open with the Nikki Rowe Warriors tonight under the Friday night lights.

In 2015’s district opener, the Warriors topped the Huskies to the tune of 42-25 on Juarez-Lincoln’s home field. This year, the Warriors are unbeaten heading into the district opening matchup and will be looking to keep that streak alive. The Huskies have their sights set on avenging last year’s loss and building on the early success they’ve had this season.

The Warriors bring with them a high-octane offense that has posted big numbers on the ground and through the air, totaling 721 passing yards and 403 rushing yards in just three games. Garcia will have his group ready for the challenge Rowe presents.

“They’re 3-0 and we understand that, they’re mixing it up a bit more but we’ll be ready. This is the first time we’re 2-2 in Juarez-Lincoln history and I’ve told them we have to carry this momentum into the game against Nikki Rowe,” Garcia said.

The stage is set for the two District 30-6A playoff hopefuls as the Juarez-Lincoln Huskies (2-2) visit the Nikki Rowe Warriors (3-0) Friday at 7:30 p.m. at McAllen Veterans Memorial Stadium.