Garza, dressed in the same faded green shirt he wore when he was arrested Sept. 16, pleaded not guilty to seven counts of wire fraud and one count of conspiracy to commit wire fraud. 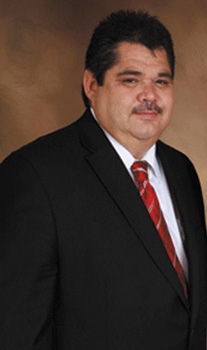 Garza is also a La Joya ISD trustee, but the charges are unrelated to the district.

Federal agents had raided his office and home in December 2013 and the charges date back to incidents that occurred in 2012 and 2013.

U.S. Marshals arrested Garza, as well as local contractor Armando Jimenez, in connection with a bid-rigging scheme. The indictment against Garza states that between July 2012 and March 2013, Armando Jimenez and Juan Jose Garza submitted false bids so that Jimenez construction would win the bidding for construction projects for the Alamo and Donna housing authorities. The false bids were submitted under the names of Crane Construction and Carlos Orillana, according to the unsealed indictment.

Jimenez also pleaded not guilty to similar charges. His detention hearing is set for Friday, Sept. 23.

Robert Jackson, Garza’s lawyer, said Thursday he expects Garza to be released from custody Friday, adding that his client and family felt “relief” over the bond. In an interview Tuesday, he said Garza’s reputation in the community would help grant him a reasonable bond. &nbsp;

“Garza is accused of committing wire fraud, a non-violent offense,” Jackson said. “He is a respected member of the community and even serves as vice president for the La Joya ISD school board, he is well-entrenched in the community.”

“There’s a lot of nastiness going on since this arrest and I’d ask the public to hold off on any judgment,” Jackson added. “There’s no need for any of it and no one, especially people like Garza who is a family man, would want to be in the situation he is in.”

“Since Garza’s [arrest] has nothing to do with our authority, we’re operating as usual,” Armijo said in a phone interview Tuesday. “We were very surprised when this incident occurred but we believe in innocent until proven guilty and I’ll be here and step down whenever Garza comes back.”