Other cities have discussed it, but only Mission is doing it.

The City of Mission on Oct. 1 submitted a $500,000 grant proposal to Texas Parks & Wildlife to build a tennis complex in Mission. The proposal includes constructing 13 tennis courts in addition to the three courts already existing at Birdwell Park. The park is located at the corner of Stewart Road and 24th Street in Mission. 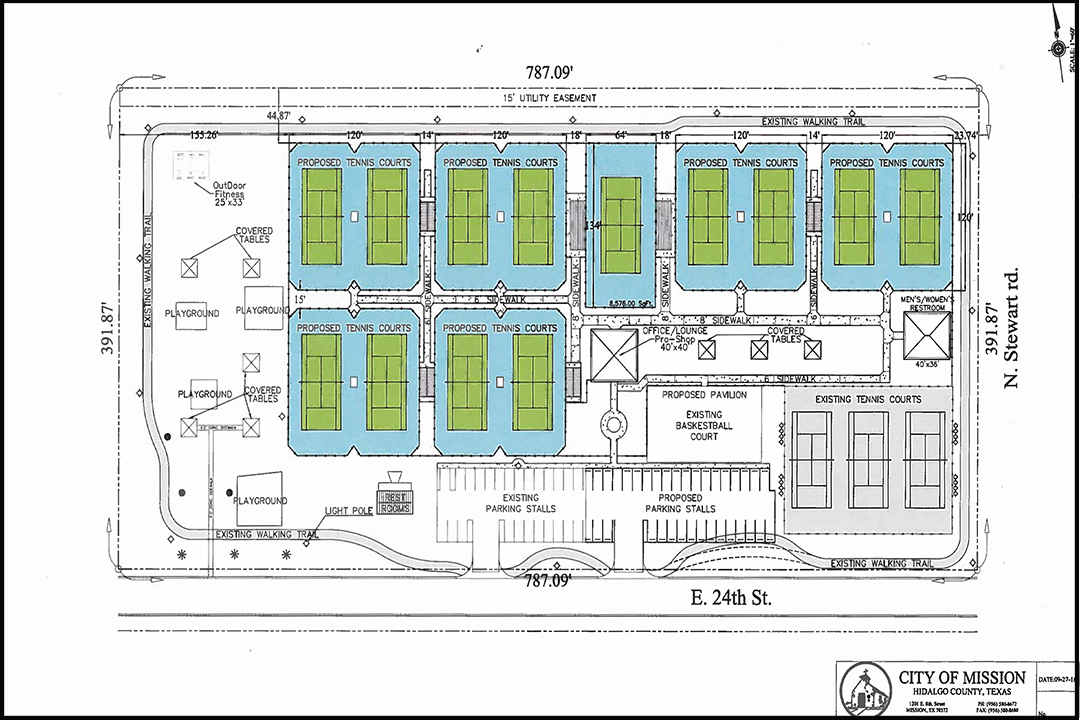 Mission City Manager Martin Garza Jr. said the city has been working with US Tennis Association in Austin and New York to make sure the city’s proposed tennis complex meets the requirements to host their tournaments.

“According to the US Tennis Association, that’s the number of courts recommended to bring in full USTA sanctioned tournaments,” he said.  “Their designers have reviewed our plans and made recommendations to ensure that this facility would properly accommodate the type of tournament play the city wants to host in Mission.“

In addition to building 13 additional tennis courts, the city plans to install bleacher seating at each of the new courts, with more bleachers provided for the main court, where tournament finals would be held.  The existing basketball court will be covered with a canopy, so during tournaments that area can serve as a shelter from the sun for participants.  More parking will be added and additional restrooms will be constructed, as well as an office/lounge/pro shop.  Competition grade lighting will be added to the courts, and steps will be taken to minimize any impact on neighbors nearby.

In addition to the tennis facilities, the park itself will receive upgrades such as the existing walking trail will be widened to 10 feet, and an outdoor fitness area for handicapped individuals will be constructed.  The playground and picnic areas will remain intact.

This would be the only tennis complex on this end of the Valley that could host USTA tournaments. Brownsville has a tennis complex with even more facilities, such as a training room and lockers, that allows them to host tournaments for the semi-pro circuit.

The grant requires $500,000 in matching funds from the city, which Garza said is already included in the city’s budget.  Since the anticipated total cost of the project is $1.8 million, the city is seeking corporate sponsorships and other donations to cover the remaining costs. Corporations, clubs and organizations will have the opportunity to have a tennis court named after their organization, he said.

Garza explained that the city created a 10-year parks master plan this summer, which included a community survey to help determine city parks priorities.  Among the top three priorities emerging from this process was the need for more tennis facilities. The city currently has only nine tennis courts: three at Birdwell Park, two at Oblate Park and four at the relatively new Bentsen Palm Park.

The new tennis facilities would be available for public use and the city plans to implement a tennis program through the Parks & Recreation Department.

The city expects to receive word in March whether their grant application is selected for approval.