Mayor Salinas has consistently worked to create a business-friendly environment in Mission, creating opportunities for businesses – small and large – to grow and prosper. The mayor himself has been an entrepreneur, starting Catalina Ambulance Service in the 1970s and several other businesses since that time. Today he and his partner operate S&F Developers, developing properties and building subdivisions in Hidalgo and Starr counties. 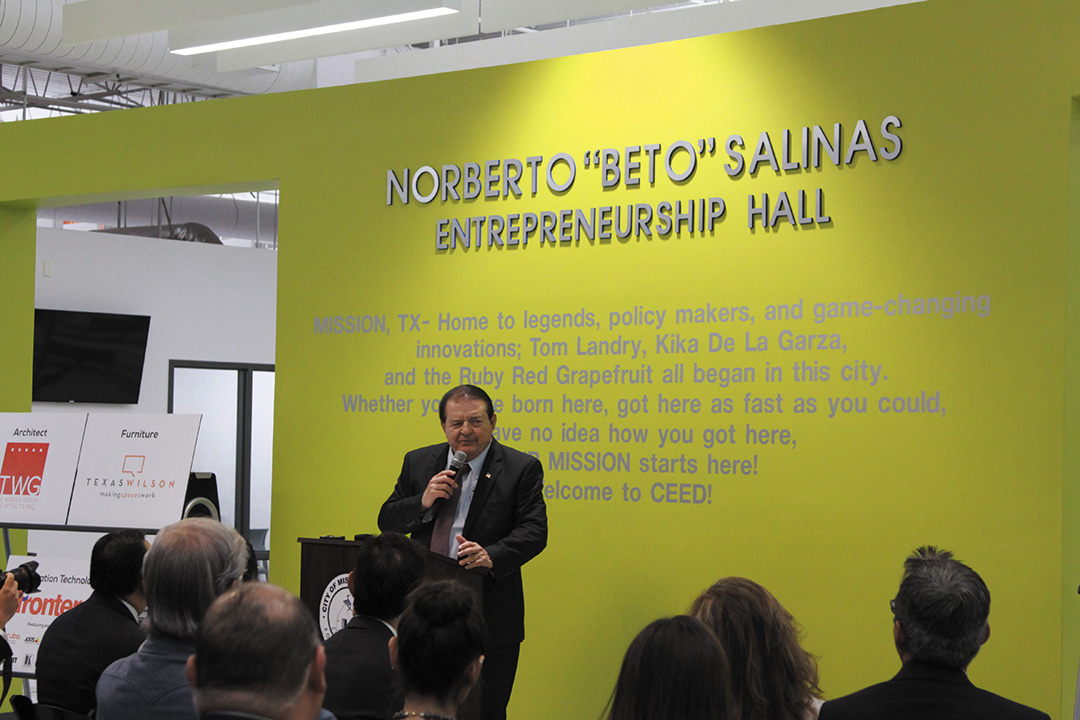 The 55,000-square-foot building, which will serve as a coworking space for business professionals, contains classrooms, computer labs, offices, conference rooms, a coffee shop and 258 open floor seats. The sprawling building will be split into three halls: education, technology and entrepreneurship.

Organizations that will be housed in the CEED building include the Sylvan Learning, Schreiner University, Teach for America and various startups that have come out of the Mission EDC Ruby Red Ventures Program.

During the grand opening ceremony, Mission EDC CEO Alex Meade unveiled the name of the CEED’s entrepreneurship hall, which was named after Mission Mayor Norberto “Beto” Salinas, an individual Meade said was a “lifeline” for small business owners.

“Mayor Salinas has lowered property taxes every year since he’s been in office,” Meade explained after the ceremony. “For any business, property taxes are a big deal and with Salinas lowering the city’s tax rate by 14 cents over a period of 20 years makes the area seem more business friendly to companies wanting to move into the community.”

At the event, Salinas expressed appreciation for the honor, citing that the building, which used to be a K-Mart, no longer looks like an eyesore.

The EDC also signed a strategic alliance memorandum with the Small Business Administration’s Lower Rio Grande Valley District Office. As part of this agreement, the Harlingen-based company will send an economic specialist to the CEED building twice a month to help the EDC develop workshops for entrepreneurs, according to SBA Director Angela Burton.

Burton believes the signed memorandum will serve as an essential piece to support local businesses.

“We want to make sure every small business has every resource available to them to help them start growing their business,” Burton said. “Through workshops, we can help people properly start their business and then maintain it to the point that we can push them to do government work. We’ve worked with the Mission EDC before through their Ruby Red Ventures program and this agreement solidifies our partnership.”

COLLABORATION
During the ceremony, Meade thanked EDC board members as well members of the community who stood by the EDC during the construction of the CEED building, which took two years to complete.

“It’s something that we could not have done alone and I’m glad we were able to see it through,” Meade said. “We were all joined by a common mission to help start, maintain and expand small businesses here and now we have a building that is unique to the region that can do just that.”

“All three of these halls are set up in a way that we hope will lead to all the business in their different sections to collaborate with each other on any project they’re doing. Meade said. “This is an office building that allows for business incubation and creativity and we hope people will take advantage of that as we create a new generation of skilled workers to make them more attractive to new businesses.”