As back-to-back District 30-6A champions, the McAllen Memorial Mustangs have played in more than their share of games with first place on the line lately.

For the La Joya Coyotes however, it’s been more than a decade since they played for the right to sit atop the district standings. So while this may not be completely unchartered territory for the Coyotes football program, the fact that the seniors on this year’s squad were in first grade the last time a La Joya High football team entered a game with first place on the line, should make tonight’s game at La Joya ISD Stadium one for the scrapbook. 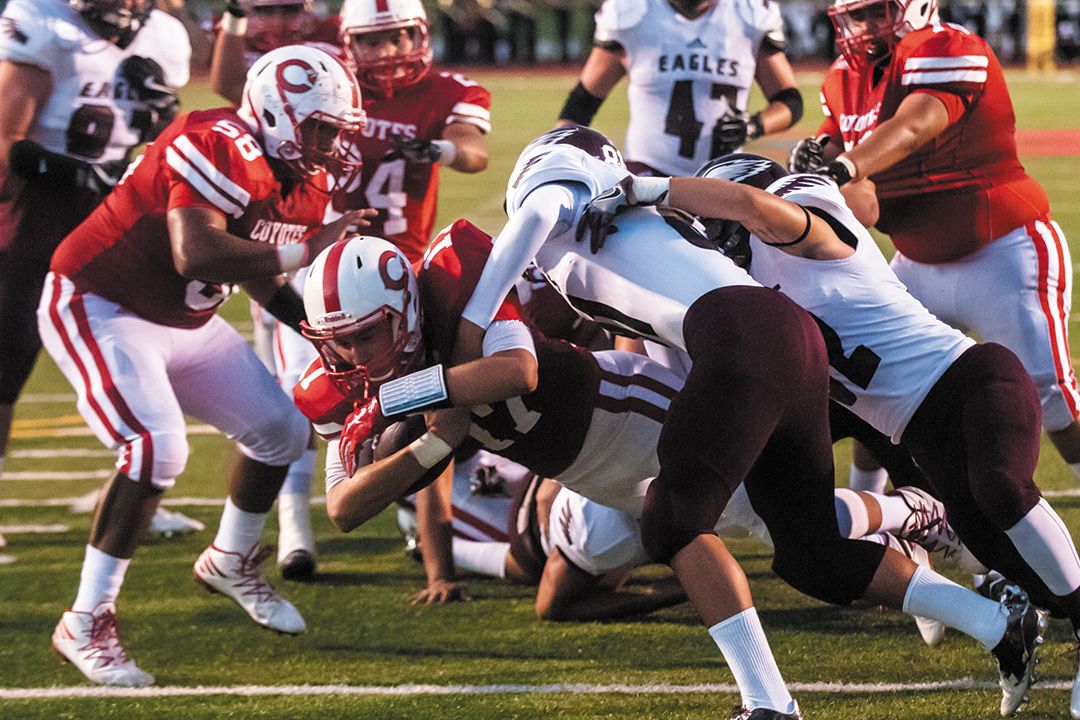 While there are still four weeks remaining in the 2016 season, the 3-0 Mustangs and the 2-0 Coyotes are the only two remaining 30-6A teams that have yet to suffer the agony of a district defeat. Therefore, the winner will not only stand alone atop the standings, but will also have a tie-breaking advantage over the loser should the two teams end the season with identical records.

On the subject of advantages, one advantage that La Joya does have over Memorial is that thanks to their bye last week, they’ve had two weeks to prepare for the Mustangs. And as Coyotes’ head coach Reuben Farias explained, included in that preparation was the scouting of their game against McAllen High last week.

“They have an explosive offense and they’re quick on defense,” said Farias. “They’ve got three running backs, Campbell Speights, Emilio Mendez and one other one, and of course their quarterback. So they’ve got four viable threats in their backfield. They run the ball with power football which is going to be a test for our defense.”

Against the Bulldogs last week, six Mustangs’ runners combined for a total of 368 yards and six touchdowns. Leading the way was Speights, a true freshman, who carried the ball 20 times for 160 yards and three touchdowns. As impressive as those stats are, just three weeks ago, in a game against the Palmview Lobos, the Mustangs had three different players carry the ball for 100+ yards each as the Mustangs combined for a total of 566 yards and nine touchdowns on the ground.

One La Joya defender that is going to be in the thick of all the action tonight is senior middle linebacker Rey Hernandez.  When asked what it’s going to take to stop the Mustangs’ potent running attack, Hernandez said, “The first contact has got to be the only contact. In other words, we’ve got to make good tackles.”

The fact that Memorial is the odds-on favorite to remain undefeated after tonight’s game does not mean that Hernandez and his teammates are going to concede defeat; especially not on their home turf.

“We’re playing at home and we’ll have the crowd behind us,” said Hernandez. “We’re not going to be afraid of anyone. We’re going to play our game and we’re going to try to come out with a victory. We never shy away from anyone.”

When asked what the key to the Coyotes’ defensive success has been so far this season, Hernandez said, “It’s like our defensive coordinator said, “We have no superstars. No one is a standout on our defense.” What that means is that we all have to work very hard to get a team victory. So what we preach to our defense is to play as a team. We play for one another because that is all we’ve got.”