After a one year delay, construction on La Joya ISD’s $16.4 million Natatorium Complex has resumed construction and is making good progress, according to a district official.

La Joya ISD Facilities Manager Daniel Garza said 20 percent of the total project has been completed through September 30.
The two-and-a-half-acre complex, which will consist of a natatorium, a water park and a planetarium, should be completed by mid-2017, Garza said.
Plans for the Natatorium Sports and Learning Complex were introduced in 2013 when the district discussed its budget for the 2013-2014 school year, The Progress Times previously reported.

“With two of our three high schools located outside of the city of La Joya. We decided a centrally located practice facility would reduce travel time for our student athletes and allow them to get home earlier,” Benavides said in a statement. “This in turn would allow them to have more time to complete homework and spend time with their family.”

In August 2014, the district’s board of trustees approved a full bid of $16,386,833 to Texas Descon to build the natatorium and water park, according to earlier reports. The district broke ground the following month on the site located along Western Road in Palmview near their Howling Trails Golf Course. At the time the estimated completion date was November 2015.

However, construction was halted when Texas Descon defaulted the project in early 2015, according to Garza. Construction then picked up earlier this year with a new contractor.

“The bonding agent bid out the project after Descon’s default and awarded the project to the McAllen-based D. Wilson Construction Company in late April 2016,” Garza said. “The district’s contract with D. Wilson should [be finished] by June 2017, which is when they project completion of the facility.”

Besides a water park, the complex will also house tennis courts, a soccer field and a homework center for students to work on their school work, according to district spokeswoman Brenda Cantu.

The natatorium itself will house of an indoor competition pool and a separate diving well pool to be used for student athletes, Cantu said. 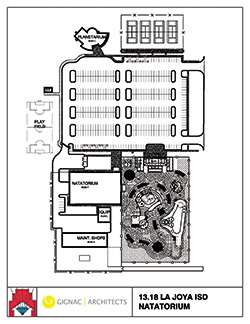 Benavides said the district felt “disappointment” when the project was originally delayed due to issues the original contractor was having, but she feels satisfied with the progress made with the new contractor.

“It was and still is our intention to deliver what we promised. Unfortunately, in this case, there were variables out of our control that caused the project to delay,” she said.

“The complex is being opened with the intention and vision of being a place… students who would like to focus on sports and science can use,” she added. “We anticipate that the complex is viewed positively as another effort by our district to continue to open avenues for its students to [pursue] and to do all that is possible to keep our students engaged in activities that will help them be better members of our communities.”