Coming off back-to-back losses against top district opponents Pioneer and Laredo Nixon, Patriots’ head coach David Gilpin knew his squad would have to come out and bring the fight to Rio. 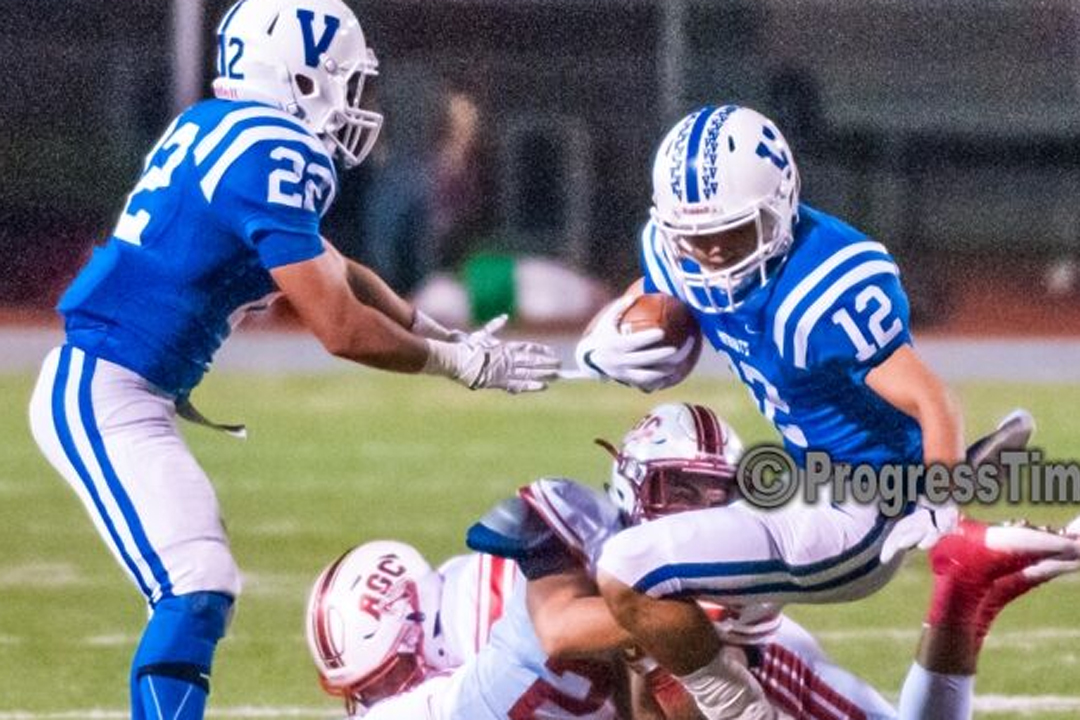 “We knew our playoff backs were against the wall tonight, we had to come out swinging and that was our mentality,” Gilpin said. “With our playoff lives on the line, we challenged our kids. In our seven years, now in our eighth, we’ve only missed the playoffs once. We asked the kids how you want to be remembered?”

The Rattlers were the ones who struck first, as junior free safety returned the opening kickoff for a touchdown just 12 seconds into the game. Patriots’ senior quarterback Diego Hernandez answered with a quick score of his own, connecting with sophomore receiver Landry Gilpin to tie the game at 7 just a minute into the game.

Rio moved into scoring territory and facing a fourth and goal from the 22-yard line after a holding penalty, junior quarterback Jason Perez connected with receiver Victor Marquez to put the Rattlers up 14-7 with 8:20 left to play in the second quarter. The Patriots again responded as Hernandez hooked up with Landry for a 38-yard pass to the 1-yard line to set up a rushing touchdown by Hernandez to send the game into the halftime at 14-13.

The Patriots came out of the locker room looking to make a statement, and they did by scoring on their first four possessions of the second half. Hernandez had no trouble moving the ball all night, repeatedly finding dynamic receivers senior Jacob Guerrero or Landry breaking free from Rio defenders.

“Our receivers see me buying time in the pocket, our offensive line does a great job blocking and they find a way to get open,” Hernandez said. “Our receivers are finding holes in the defense and we’re hitting them and scoring as a team. It’s a good feeling.”

Hernandez scrambled right to keep a first-and-goal play alive to find Gilpin for a 5-yard score to put the Pats up 20-14 with 8:37 to play in the third quarter. Rio responded with mobile quarterback Perez as he found the endzone for a 3-yard plunge but missed the extra point to tie the game at 20 apiece.

Coach Gilpin’s Patriot squad used big plays from their special teams unit beginning with a 27-yard field goal from senior kicker Brayan Barrios, followed by fumble recovery by their kickoff team. The Patriots made them pay as Hernandez scrambled again to find an open Gilpin for a 19-yard score to go up 30-20.

After another Perez rushing touchdown for Rio, Hernandez threw a laser to Gilpin for their fourth touchdown connection on the night to put the Pats up 37-27. Hernandez followed that up with a 16-yard scamper into the end zone for his second rushing touchdown of the night, bringing his total to six scores in the game.

The Patriots defense came up big in the second half, constantly putting pressure on Perez and making him uncomfortable.

“Coming into the game, we knew their quarterback was going to be a big deal. Our coaches told us stopping him was key, they wanted us to keep our eye on him and we got to him in the second half,” senior outside linebacker Sergio Garcia said.

The Pats defense made the last play of the game as senior defensive back Jacob Garcia jumped on a ball and returned an interception to the house for a 60-yard score to drive the final score to 51-34.

Coach Gilpin spoke about his team’s win after the game.

“Offensively, we were outstanding, defensively we batted, special teams stepped it up in the second half,” Gilpin said. “One of the things we hang our hat on is winning the turnover battle and we won that tonight.”

With the win, the Patriots improve to 4-2 in District 31-5A play and move into fourth in the district standings while the Rattlers fall to 4-3 and drop to fifth.

For more photos, check out the gallery here.