With this year’s general election set for Nov. 8 and early voting commencing Monday, Oct. 24, the Progress Times reached out to the six candidates vying for three seats on the Palmview City Council. 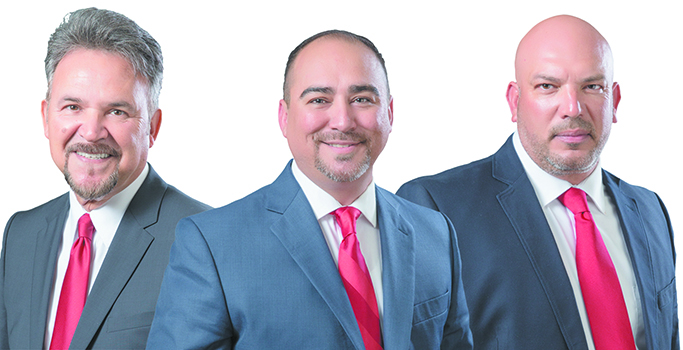 The trio is facing off against the “Progress for Palmview” slate, which consists of Javier Ramirez (Place 1) a high school teacher, businesswoman Linda Sarabia (Place 3) and business owner Joel Garcia (Place 5).

Place 1
Arnaldo Nacianceno (Palmview 1), who has served on the city council for two years, said he joined the slate because he believes his running mates will help him accomplish what he couldn’t do in office in his first term.

“My biggest priority was always to improve several of our streets but those projects were always put on hold by other councilmembers,” the La Joya ISD Custodial Director said. “We have enough money to improve at least four roads and I’d like to fix Greene Road, one of our main roads, because if residents and businesses know we’re trying to fix ourselves, it’ll make us look more attractive as a destination.”

Nacianceno also expressed an interested in hiring a Public Relations manager within the first 100 days in office to update the city’s website and social media presence.

“Not a lot of people are aware of what goes on in the city because that information is so hard to find,” Ramirez said. “We need to have more people attend our meetings so they can be aware of their own city and how the city council is using their money because it’s not fair to keep taxpayers in the dark on those issues.”

Ramirez also said he and members of his slate would look into the city’s discretionary spending to make sure it is being used correctly and to hire city employees based on merit.

Place 3
Jose Luis Perez, a math teacher at Juan de Dios Salinas Middle School, is a member of the “Palmview 1” slate. Like Ramirez, Perez said the city should be more accessible to Palmview residents. Because of this, he and his slate members, plan on instituting an “open door policy.”

“We want people to feel comfortable enough to voice their concerns so they can be better exposed to the city,” Perez said. “Many of the previous city council meetings have only been attended by a handful of people. More of them need to be aware of what the city is doing for them.”

Perez said despite the fact that his slate is composed of members from three different backgrounds—facilities, education and religion—they all share a common goal to strengthen the city.

The “Palmview 1” slate recently released an agenda of what they plan to do in their first 100 days in office. Among the pledges included in the agenda is to have four of the city’s streets paved and install more streetlights. Perez believes these actions will help the city as it grows.

“We need to improve ourselves before we attract businesses,” the 48-year-old said. “Our city has remained stagnant for years and before we get any bigger, we need to have a strong foundation.”

The city is currently working with the Agua Special Utility District (Agua SUD) to bring sewer to the city. The Texas Department of Transportation proposes to widen FM 495 from a two-lane road to a four-lane road, between La Homa and North Abram Road.

With all these changes coming into the city, Perez also expressed a desire to build a library or learning center for the Palmview, something that is shared by his opponent, Linda Sarabia.

Linda Sarabia, 39, (Progress for Palmview) said a library is needed for the city as it is the only city in the La Joya area that doesn’t have one.

“We only have a Boys and Girls Club that caters to only student athletes,” the owner of Sarabia Financial Services said. “We need something everyone can enjoy and to do that, we need to bring the city into the 20th century as we’re far behind on infrastructure.”

Sarabia, who is the founder of the Palmview Chamber of Commerce, agrees with her Place 1 running mate Ramirez on updating the city website. She also proposes live-streaming city council meetings so residents who can’t attend will still have access to meetings.

Sarabia believes she and her running mates are the perfect candidates to move the city forward, as they all have experience operating successful businesses.

“Palmview has had the same administration for 20 years and it’s time for a change, and [Progress for Palmview] has the experience to lead the city in a new direction,” she said

Place 5
Juan de la Garza (Palmview 1), a pastor for the nondenominational church Iglesia del Pueblo, has become more active in the community in the past three years. The 65-year-old from the Mexican state of Tamaulipas said he only decided to run for city council after Palmview Mayor Gerardo Perez asked him to.

“Being an influential person in the city is one thing, but making decisions for the city is another,” de la Garza said. “I’ve been a community leader for many years and I decided to run because I feel I want to help the mayor’s vision and the city’s and I have a lot more to contribute to the community as a councilman than as a pastor.”

De la Garza said he and his running mates will clean the city by removing debris from lots, pave four streets and install more street lighting.

“We already know sewer is coming to the city, but for now we can focus on preparing the city for more people coming in,” he said. “I would like to see businesses flourish throughout the community and provide jobs to residents so they don’t have to drive to Mission or McAllen for work everyday.

De la Garza also responded to allegations he was using his church as a political platform. In a recent post from the official “Progress for Palmview” Facebook page, the slate shared screenshots of a post allegedly showing de la Garza promoting his slate in his church.

According to Linda Sarabia, using a church to promote candidates is against non-profit 501c3 status guidelines and for de la Garza to use his church to promote his candidacy makes the race an “uneven playing field.”

De la Garza, however, pointed to a series of guidelines provided by the Alliance Defending Freedom website saying pastors can personally endorse candidates.

“As long as it’s me doing the endorsement from my pulpit without telling my congregation to follow my example, then the church is not promoting anyone,” he said. “If there’s something
wrong with that I’d like to know what my sin is.”

Joel Garcia, owner of auto shop Collision Masters, is de la Garza’s opponent in the city council Place 5 race. Garcia served as a board member for the La Joya Independent School District before deciding to run for city council. He said once elected, he and his running mates of the “Progress for Palmview” slate will work closely with city administrators to improve the city, no matter how long it takes.

“We’re going to come into the office hitting the ground running,” the Palmview resident said. “We know what we can do but it’ll depend on city administration to see how much money we have and what we can use to move forward. Anyone can have a wish list of what they want to do and say ‘We can do it in 100 days,’ but it’s different once you’re actually executing them. We need time and money to move forward.”

Like his fellow running mates, Garcia expressed a desire to update the city’s website but also has plans to make Palmview grow as they wait for the Agua SUD wastewater project and the TxDOT road widening project to start.

“We’re at least 20 years behind compared to other cities and need to move forward as soon as possible,” he said. “[Linda] Sarabia, as a member of the city chamber of commerce, is already working with businesses to bring them into the city and we should look into promoting our local mom and pop stores so they stay open, and bring in big businesses that don’t require sewers, such as clothing stores, anything to put Palmview on the map.”