In an attempt to meet the demand by many Hidalgo County voters for more information about Proposition 1, the non-partisan, civic organization Futuro McAllen hosted a forum Tuesday evening to shed more light on the topic.

Proposition 1 is a ballot initiative that will allow Hidalgo County voters to decide on Nov. 8 whether to form a new healthcare taxing district. 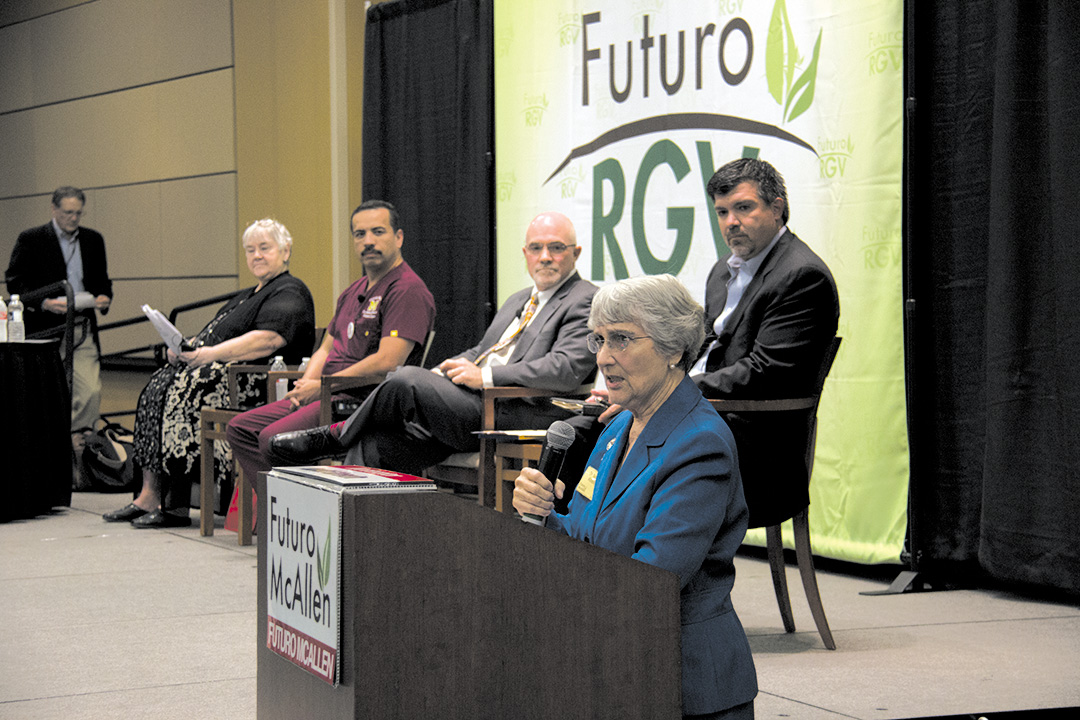 David Girault, of Futuro McAllen, made a presentation on the basic facts regarding the proposed healthcare district, providing a foundation to help audience members better understand the complex issue. This article, based on Girault’s presentation, provides that foundational information. Watch for a follow-up story in next week’s issue of the Progress Times for comments by the panel members.

Girault said, “We hear a lot of the people saying, ‘We want some of the background facts.  We’re not familiar with how the healthcare system works here in Hidalgo County, so we’d like some clarification.’

“So we want to provide you with some of the basic information we have received from the Hidalgo County Health Department and some of the research we have done independently at Futuro McAllen to let you know how things work now and how, as we understand it, they may work if Proposition 1 passes.

The information presented by Girault is listed below.

Healthcare District Basics
All counties in Texas are mandated by state statute, if there is no hospital for indigent care, then the county must provide care to its indigent residents.
Indigent is a legal definition, set by state law. It is a minimum standard.  The county can go above this standard, but not below.

Indigent care eligibility requirements:
— Must be a legal resident of the county. (Residency is not the same thing as citizenship.)
— Income standard: one must be below 21% percent of the federal poverty level to be eligible for the indigent care program.  That puts the maximum income at approximately $5,000 per year for a family of four.

What Does A Healthcare District Do?
The district provides basic healthcare, such as doctor visits, immunizations, lab X-rays, prescriptions, in and outpatient hospital care and diabetic supplies. By statute the county is only obligated to provide that care up to a maximum of $30,000 per recipient per year, but the average spent per client in Hidalgo County in 2015-2016 was about $1750.

In the 2015-2016 fiscal year, Hidalgo County allocated $5.5 million for the indigent care program specifically, plus another $1.5 million for administration of the program, or $7 million total. That equates to roughly a tax rate of 2.3 cents per $100 valuation.

A one cent tax countywide raises about $3 million in revenue.

There were 7,749 applicants to the county indigent care program, and 5,186 clients were served.

The average spent per client was about $1750.

The total spent on indigent care was $9.1 million, including federal matching dollars.

The federal government 1115 Waiver allows states to draw down Medicaid funding (as part of the Affordable Care Act) as a match to their local spending.

This year the match was about $1.36 for every dollar spent by the county. Last year the county allocated $5.5 million to the state for indigent care, in exchange for which the state and federal government returned about $12.98 million.

The excess over the $9.1 million – almost $4 million – went to uncompensated care, which is different than indigent care.

What is Uncompensated Care?

Girault gave two scenarios to illustrate what uncompensated care is.

Scenario No. 1 is someone above the $5,000 indigent income level without insurance. If they show up at the emergency room, they have to be treated. If they don’t pay the bill, that is a form of uncompensated care.

Scenario No. 2: Girault said, “The other day, my daughter had an allergic reaction and I had to take her to the emergency room. In addition to what my insurance paid, because it was an emergency room visit, I got a bill for $1,100.  If I were to not pay that bill, that would be uncompensated care.”

Uncompensated care in Hidalgo County is estimated to be about $100 million to $120 million annually.

What Uncompensated Care is Not

Uncompensated care is not the difference between what the hospital bills you and the amount they get paid by insurance.
Setting the Record Straight

Girault said, “You may have heard that the county is required to spend a certain percent of its budget on indigent care.  That’s old law.  That is no longer correct.”

Under an older program, before the 1115 Waiver was created there was a statute that said if the county spent 8% of its budget on indigent care, that was the maximum obligation the county would face.  The state would then match 90 cents for every dollar the county spent over the 8%.  But the state basically defunded that program when the 1115 waiver came in. There is no obligation for a certain percentage of the county budget, Girault said.

Healthcare Districts in Other Counties

“Their district functions similarly to what we understand this healthcare district will function like. That is, the Austin healthcare district does not have any hospitals or clinics that they operate directly. They pay their money and draw down 1115 money to match it and then they pay for healthcare services by the Seton and St. Davis healthcare systems (hospitals) and others,” Girault stated.

“So their operation is somewhat similar to ours, although there are some unique differences, not the least of which is the taxable value of Austin vs. Hidalgo County.”

What Will Hidalgo County’s Healthcare District Look Like?
    Initial tax rate: 8 cents
    The taxes set by the district are subject to the rollback rules of the tax code if the taxes increase more than 8 percent.  A $0.75-cent tax rate increase will trigger a tax rollback election. Assuming no increase in property valuations by the appraisal district.
    To have a rollback election, seven percent of the registered voters in the county must sign a petition for a rollback election.  As of this week, seven percent of the registered voters would be 23,668 signatures that will be necessary for a tax rollback petition.
    It took only 50 signatures to get Proposition 1 on the ballot.
    The maximum tax rate is capped in the statute at 25 cents per $100 – “sort of.”  The statute allows the board to call an election to increase that rate above 25 cents. They have to designate what rate they want when they call that election. If that election is successful then the cap increases.
    Ultimately, the Texas Constitution caps the rate at 75 cents.

The Powers of the District

The powers granted to the Hidalgo County Healthcare District, as set forth in the statute, are fairly consistent with the powers of other large county healthcare districts, with some exceptions.

How is the Hidalgo County District Different?
1.    In our legislation there is no provision for the removal of a board member once he is appointed.
2. There is no provision for an integrated health system. Some of the larger counties, such as Houston and Dallas, that have hospitals, have created what they call an integrated health system.
3. Other districts are not specifically authorized to do things like emergency medical services, home health, long-term care, etc.