The playoff chase is heating up with only two games remaining of District 31-5A play. Two of the teams vying for a postseason berth, the Mission Veterans Memorial Patriots (5-3, 4-2) and the Sharyland Rattlers (5-3, 4-2), are on a collision course with their Friday night matchup.

The Patriots got back on the winning track last week by overpowering the Rio Grande City Rattlers, 51-34. The win comes off back-to-back 16-point losses at the hands of the Pioneer Diamondbacks and Laredo Nixon Mustangs, who are tied for first place in District 31-5A. Patriots senior quarterback Diego Hernandez racked up six touchdowns in the game, four through the air as he connected with sophomore receiver Landry Gilpin and two on the ground. 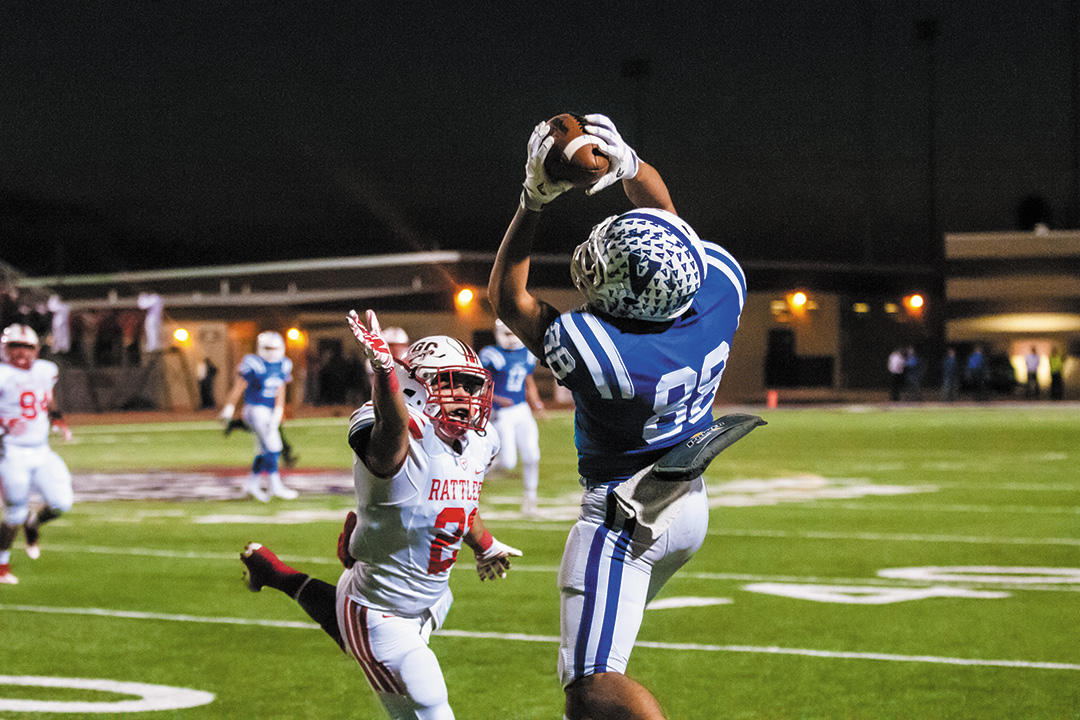 “We knew our playoff backs were against the wall tonight, we had to come out swinging and that was our mentality,” the Patriots’ head coach said. “With our playoff lives on the line, we challenged our kids. In our seven years, now in our eighth, we’ve only missed the playoffs once. We asked the kids how you want to be remembered?”

The Rattlers are coming off a 41-21 road loss to the Laredo Nixon Mustangs, only their second loss in District 31-5A play. The Rattlers and the Mustangs were tied with only one district defeat heading into the game.

The Rattlers exchanged blow for blow with the Mustangs in the first half, going into the locker room with a 21-20 lead. In the second half, the Mustangs pulled away from the Rattlers, scoring three consecutive touchdowns to break the first place tie between the two schools.

Sharyland head coach Ron Adame wants to see his defense get back to their Rattler motto “9, 5, 90”, nine guys within five yards from the ball 90 percent of the time.

“I know we can all do a great job,” Lopez said. “This week our heads are where they need to be. We know what we need to do. We have to have maximum effort throughout the entire game. Great things happen when you give maximum effort.”

In last year’s meeting, the Rattlers edged out the Patriots in a tightly contested 29-27 game. The two teams are currently tied for third in District 31-5A with 4-2 league records. This year, the Patriots will be looking to pick up a pivotal district win over the Rattlers and avenge last season’s loss.

Senior outside linebacker Sergio Guerrero, who had one sack and two tackles for loss in the game against Rio, said tonight’s game against the Rattlers is one they will be prepared for.

“We know going up against Sharyland, it’s going to be a huge game,” Guerrero said. “We lost against them last year so we have to go in there with a chip on our shoulder. We know they can put up points so defensively we have to fight angrily because nothing is given to us. We’ll be ready for them.”

Hernandez has accounted for 34 of his team’s touchdowns, 27 through the air and seven on the ground. Hernandez possesses a cool, calm, and collected demeanor at the quarterback position and is approaching this big district game just like any other.

“Every week is a new week; every game is a new game,” Hernandez said. “We’re going to listen to our coaches, they’re going to get us prepared and we’ll be ready to go against Shary.”

The District 31-5A game between the Rattlers and the Patriots is set for Friday at 7:30 p.m. at Tom Landry Stadium. A victory for either team will put them in third place in district standings and in position to qualify for the state playoffs.