With playoff implications on the line, the Sharyland Rattlers outlasted the Mission Veterans Memorial Patriots 42-28 in their District 31-5A matchup Friday night at Richard Thompson Stadium.

The first half started as a shootout, with the Rattlers and the Patriots exchanging touchdown for touchdown. 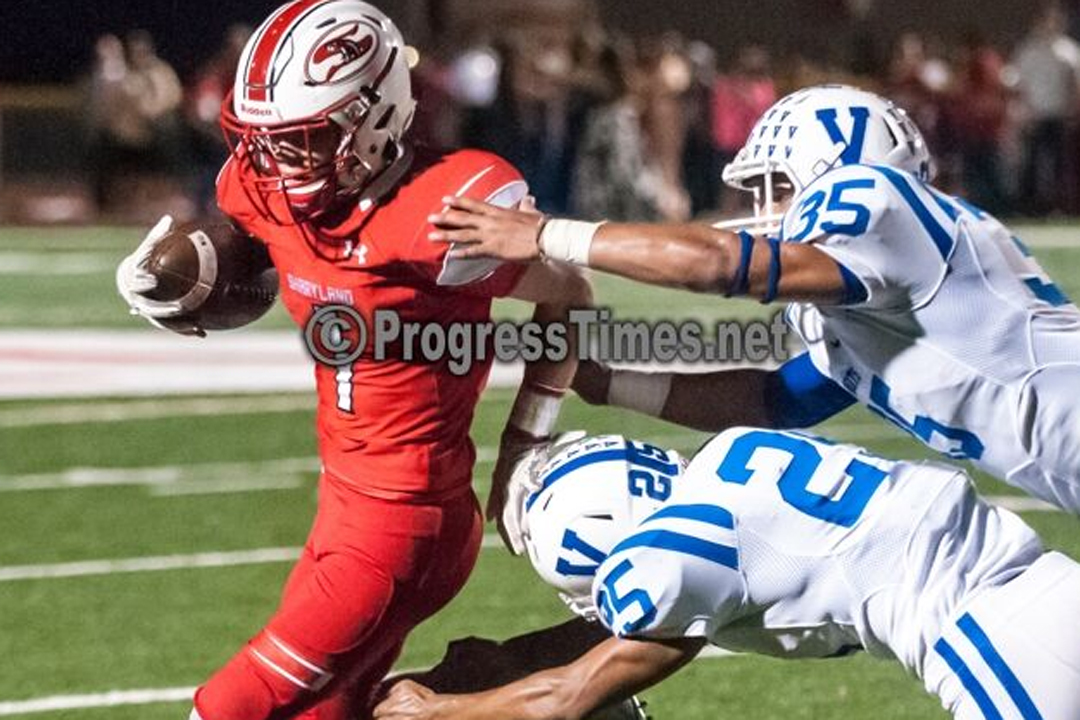 “Throughout the week I just prepared myself as if I was the starter,” Longoria said. “I gave it 100 percent every day and I had a good week of practice. We just believed in each other and big plays came out. I trusted them, they trusted me and we were able to get into the end zone.”

The Patriots and senior quarterback Diego Hernandez responded with two touchdowns of their own with a 1-yard plunge into the end zone and 3-yard strike to sophomore receiver Landry Gilpin to tie the game at 14-14.

The Sharyland defense was the first to make a big play as junior defensive back Jimmy Esquivel scooped and scored on a fumble recovery to bring the count to 21-14 in favor of the Rattlers with 3:37 left to play in the first half.

Hernandez and the lethal Patriots’ offense took only two plays and 24 seconds to answer, using a 48-yard catch and run by senior receiver Roman De Leon to set up a 2-yard touchdown pass to senior receiver Jacob Guerrero, sending the game into the locker room tied at 21-21.

Rattlers’ senior left tackle Adolfo Trevino said competitive games like this are why he loves football.

“Both teams played outstanding,” Trevino said. “It was perfect football. I love this game so much.”

Mission Veterans Memorial came out and put the first points on the board of the second half after recovering a Sharyland fumble on the opening kickoff. Hernandez connected with De Leon on a 13-yard dart to De Leon to bring the score to 28-21.

The Rattlers kicked their game up a notch on both sides of the ball as they had to keep up with one of the most potent offenses in the Valley.

The final score of the game came on the ground from Sharyland senior captain, fullback Fernie Perez, on a 41-yard run up the middle of the Patriots defense to seal the victory for the Rattlers.

Sharyland head coach Ron Adame said his team’s goal was to get a victory in their last home game of the regular season.

“Our boys played their butts off. They gave us everything they had and that’s what we asked,” Adame said. “Before the game we talked about this being the last guaranteed home game for our seniors. It was our underclassmen’s goal to send them off on a good note and get some momentum back on our side after two straight losses.”