On a recent Saturday morning many Mission residents noticed a seemingly never-ending line of people dressed in black wearing black tape across their mouths walking down E. Griffin Parkway toward Shary Road.  There were 600 people in that long, black line, walking in silence, single file. It wasn’t a protest, but a silent cry for help on behalf of the victims of human trafficking — modern day slaves used for sex or exploited for labor.

Stephanie Hernandez organized the local “Walk for Freedom” after feeling called of God to do something about a very real problem that affects many young girls, boys and adults here locally as well as across the globe. 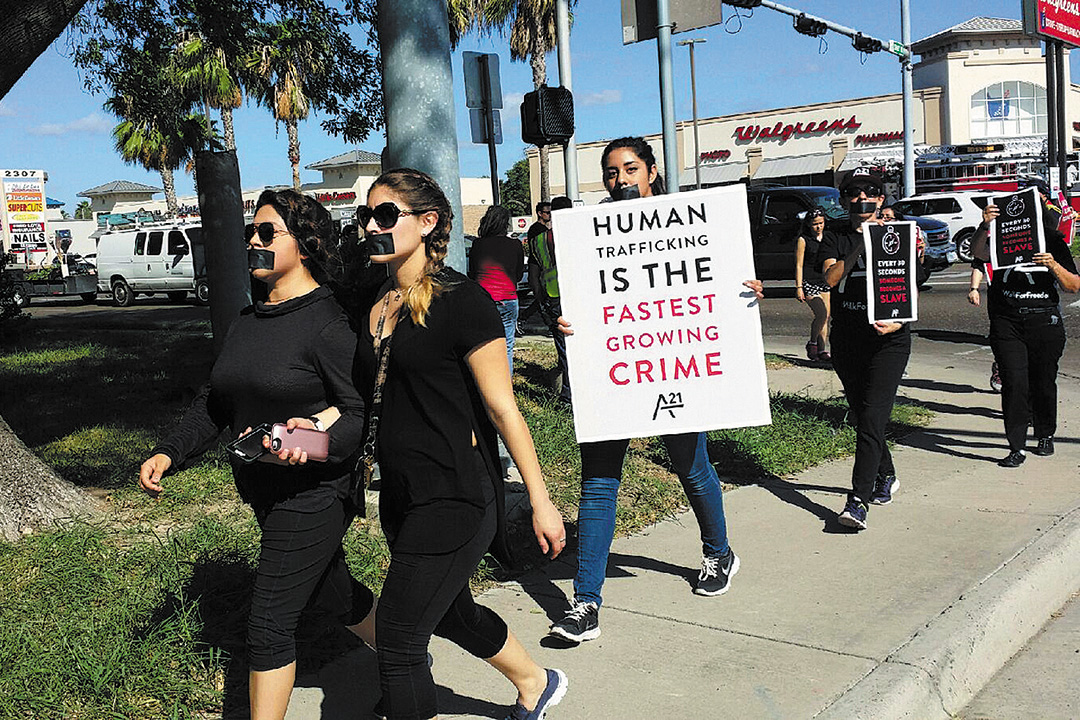 Stephanie is a young member of Palm Valley Church in Mission who, when she studied the book, “Undaunted,” in a church book study group, felt she had to do something.

“It really stirred something in my heart and I felt God was calling me out to bring awareness to a very real problem that exists, not only overseas and far away, but here in our very own backyards,” said Stephanie.

So she reached out to her church family and mobilized a Walk for Freedom and 600 people from Palm Valley and other churches joined that walk to call attention to the problem.

Daring to do what God calls you to do

As Stephanie learned more about human trafficking, which she said has surpassed drug trade as the biggest global crime, she decided to do something about it. The subtitle of the book “Undaunted” is “Daring to do what God calls you to do,” and that’s just what Stephanie did as she became determined to become that voice for the voiceless victims of this crime.

So she enlisted the help of Monica Folk, the events coordinator at Palm Valley Church, and together they made plans to organize the Walk for Freedom.

Stephanie explained the purpose of this walk.

“Our purpose here is just to bring awareness. And the reason we walk single file and in silence is to bring a voice to the voiceless,” she said.

Stephanie’s walk was one of over 300 walks held Oct. 15 all across the globe in 40 different countries to call attention to the problem, according to the A21 website a21.org. The A21 campaign is a 501 nonprofit, non-governmental organization that works to fight human trafficking, including sexual exploitation and forced labor, according to its website.

Globally, there is an estimated 27 million men, women and children living in slavery – more than at any other time in history, according to A21. The average age of a trafficking victim is 12 years of age. And 98 percent of them are never rescued.

“Our hope and A21’s hope is to partner with governments all over the world to bring these traffickers to justice,” she said. “They have offices in many different countries and partnerships with those governments to bring an awareness to law enforcement and to protect these children and adults.”

Stephanie wants to continue the journey she has started. For her next step she plans to work with Tamar’s Tapestry who is seeking to establish a shelter in the Rio Grande Valley for young girls and women who are victims of sex trafficking. Tamar’s Tapestry is a faith-based, nonprofit organization based in McAllen that helps victims of sex trafficking that can be as young as age 12, she said.

The founder of Tamar’s Tapestry, who asked not to be identified for safety reasons, was present the day of the Walk for Freedom at Palm Valley Church. She explained that many of the people involved in human trafficking in the RGV are ruthless drug cartel members.

Currently, sex trafficking victims are taken to shelters for abused women. But there are problems with this solution.

The process of setting up a shelter for these young trafficking victims is very complicated she stated, largely because there are several different agencies involved.

“We are working with all the different organizations, with Hidalgo County Sheriff’s Department, ICE, Border Patrol, the Highway Patrol – at federal, state and local levels,” she said. It is a very long, complicated process to get approvals to establish a shelter, she explained.  But she is undaunted and is relentlessly pursuing that goal to help the victims of this crime – especially young women who are being taken away from their families and sold as sex slaves.

Anyone who would like to be part of the solution to human trafficking may contact Tamar’s Tapestry. To learn more about Tamar’s Tapestry and A21, visit their websites at www.tamarstapestry.org, or A21 at www.a21.org.