At the beginning of each and every high school football season, you can ask pretty much any head football coach what goals he has set for his team and he’ll say, “Win the district championship and make the playoffs.” While making the playoffs could be a realistic goal for the majority of teams, claiming a district title is not. Yet, whether it be a matter of wishful thinking or his way of setting the bar for his particular team high, every coach continues to respond in the same way.

Now that the regular season is over, there is one Big 7 team for which it can be said that talk of a district championship was not pie-in-the-sky. That’s because as a result of their 7-1 record, the Pioneer Diamondbacks managed to not only punch their ticket into the playoffs for the first time in school history but they also earned a share of the District 31-5A title. 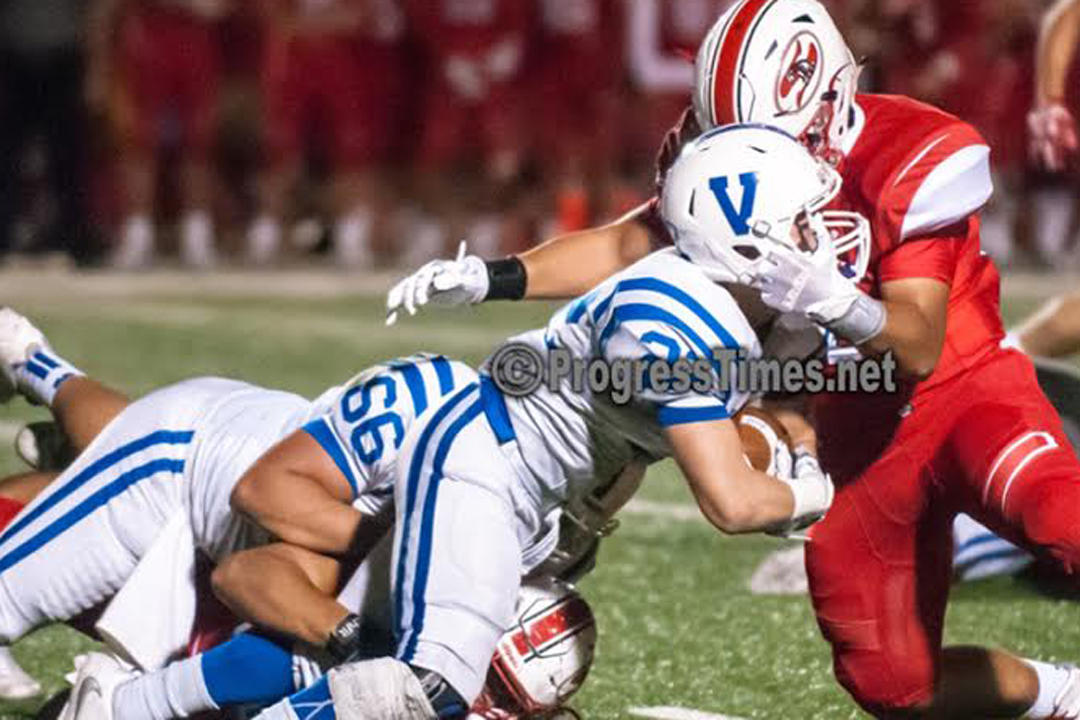 Joining the Diamondbacks in the playoffs are the 5-3 Veterans Memorial Patriots and the 6-2 Sharyland Rattlers. Let’s take a look back at each team’s season and a look forward at each of their bi-district round match-ups, all of which kick-off tonight at 7:30.

The VMHS Patriots defeated the Valley View Tigers 46-13 last Friday to clinch their fifth consecutive playoff berth. If the Patriots are going to win their third bi-district championship in a row, they will have to get past the 6-1 Brownsville Veterans Memorial Chargers tonight on the Chargers’ home field.

The Chargers have won five games in a row, including a 50-20 Week 7 win over Edcouch Elsa, since their sole District 32-5A loss to the Mercedes Tigers.

Pioneer vs Edcouch Elsa at Donna

“It’s satisfying for me for the kids,” said Pioneer head coach Jason Wheeler about the Diamondbacks first ever playoff berth and district co-championship. “Especially those seniors that were sophomores when we went 3-7, lost 55-7 to their sister school and lost games to Vela and other teams in which the scores got out of hand. It’s gratifying for me to see those seniors have the fruits of their labor pay off.”

Coming off a season in which Pioneer won their first six games only to miss out on the playoffs as a result of four consecutive losses, the Diamondbacks knew that if they were going to break into the playoffs this year, they would have to beat the likes of the VMHS Patriots and the Sharyland Rattlers. And that is exactly what they did by almost identical scores of 30-14 and 28-14 respectively.

How big were those wins? According to Diamondbacks’ junior middle linebacker Angel Chapa and junior inside receiver William Proctor, they were pivotal.

“If I had to pick a game that made us believe that we could win the district championship, it was the win against Mission Vets,” said Chapa. “That was a team that we beat for the first time this year and that win made us realize that we had a team we could go far with.”

“After we lost to Nixon, we were sitting at 2-2 so we were getting kind of worried but then we beat Vets and that was a big confidence booster for us,” Proctor said. “That was a rivalry game for us, right up there with Sharyland. We then beat a great team in Rio Grande and then Sharyland, which was awesome. So getting those three wins in a row did a lot for our confidence.”

As for their bi-district round game against the 5-2 Edcouch Elsa Yellowjackets tonight, Wheeler said, “Edcouch has a lot of tradition, but I’ll be honest with you, the fact that we’ve played teams like McAllen Memorial, Nixon, Vets and Sharyland makes us battle tested. As a result, we’re not going to be intimidated. We know that it’s going to be a hard-fought game, going all four quarters, and we know that they’ve got a lot of speed, a talented quarterback and a couple of good receivers, but if they bring their A-game and we bring ours, I feel like we have a chance to win the game. And that’s all you can ask for.”

After losing back-to-back games to Pioneer and Nixon, the Rattlers defeated the VMHS Patriots and the Rio Grande City Rattlers to close out their District 31-5A schedule and clinch their ninth playoff berth in a row. As a result, the Rattlers will be traveling to Mercedes tonight to play the 6-1 Tigers.

After losing their three non-district games, the Tigers did not taste defeat again until Week 9 when they fell to Brownsville Lopez 24-21. Mercedes then closed out their District 32-5A schedule with easy wins over Brownsville Porter and Donna North to earn the right to play Sharyland.