Guerrero, a junior at U.T. Arlington, ran the race of his career to become only the fifth U.T. Arlington Maverick to qualify for the NCAA Championship. His time of 30:32.5 in the 10k race was just 10.5 seconds behind his teammate and eighth place finisher, Craig Lautenslager. Their two top 10 finishes played a major role in the Mavericks’ third place finish overall, the highest regional team finish in school history. 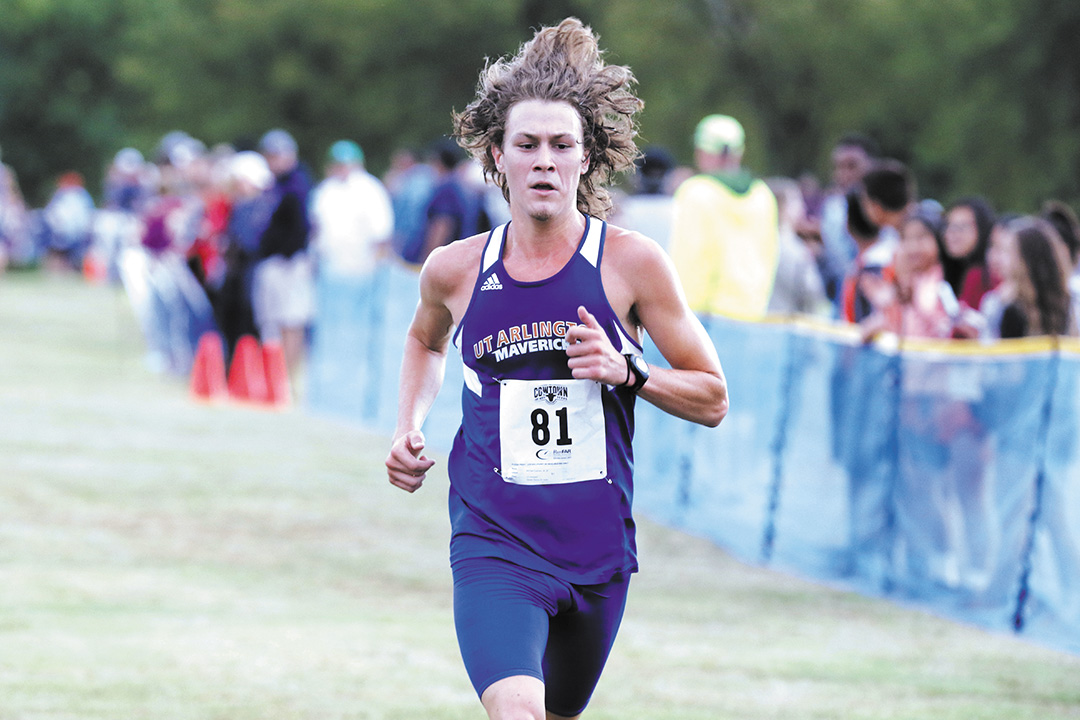 A XC standout for the Coyotes, Guerrero qualified for the state XC meet his junior and senior years, was a four-time regional qualifier, won the district XC title as a senior after finishing as runner up his sophomore and junior years, and was the cross country regional runner up and sixth place finisher at the state meet his senior year.

“My junior year I made it to state for the first time,” said Guerrero. “I was really excited to try to place as high as I could. But a half mile into the race, I got stepped on and I lost my spike (shoe) and I had no idea where it went. I just kept running like that for 2 ½ miles and I ended up close to last place. I just remember that feeling and I told myself that I’d be back next year and that I’d finish in the top 10.”

Guerrero did make a return trip to the state meet his senior year and his eventual sixth place finish played a big role in getting him several scholarship offers.

“I had scholarship offers from several schools including Stephen F. Austin University, U.T. San Antonio and others, but I chose U.T. Arlington because I really liked the team atmosphere and the coaching here is great,” shared Guerrero. “It came down to the fact that it was the school that offered what I felt I needed to take my running to the next level. It’s not a full ride scholarship that I was given but it covers pretty much everything except for my food.”

Judging by what he accomplished his first two years at U.T.A,, Guerrero has certainly succeeded in taking his running to the next level.

As a freshman, Guerrero’s accomplishments included but were not limited to earning second-team All-Sun Belt Conference accolades in XC, placing eighth at the league meet, coming in 34th at the NCAA South Central Regional, having top 10 finishes at both the Bear Twilight Invitational (10th) and UTA Season Opener (7th) and winning the 5000 meters at the Texas A&M Invitational.

As impressive as this partial list of accomplishments is, Guerrero considers qualifying for tomorrow’s NCAA Championship in Terre Haute, Indiana, to be his No. 1 achievement. He also considers the race he ran to qualify for Nationals, to be among his best ever.

“I would say that if it was not the best race I ever ran, it was right up there,” Guerrero said. “I’ve never run a race like that where I was in the front pack from the start. I’ve always worked my way up. But I’ve run this particular course before and I knew that if you don’t get out at the beginning, more than likely you won’t catch up in the end.”

As for what he’s looking to the most at Nationals, Guerrero said, “I’m looking forward to the competition. I’ve never faced a nationally ranked field before, and I love racing and I love competition, so I’m ready to see where I end up when it’s all over Saturday.”

The men’s race will begin at approximately 11 a.m. Central time tomorrow (Saturday). A live webcast of the championships will be broadcast from 10 a.m. until the conclusion of the awards ceremony, on NCAA.com.