At 56 Rene Lopez Jr. has been hanging around Mission’s Fire Department since he was eight years old.

“I was like the department mascot because my father used to bring me with him to work.  In fact, I’ve been here for every hurricane since Hurricane Beulah,” Lopez said during an interview Tuesday, referring to the category five storm that hit the Rio Grande Valley in 1967. 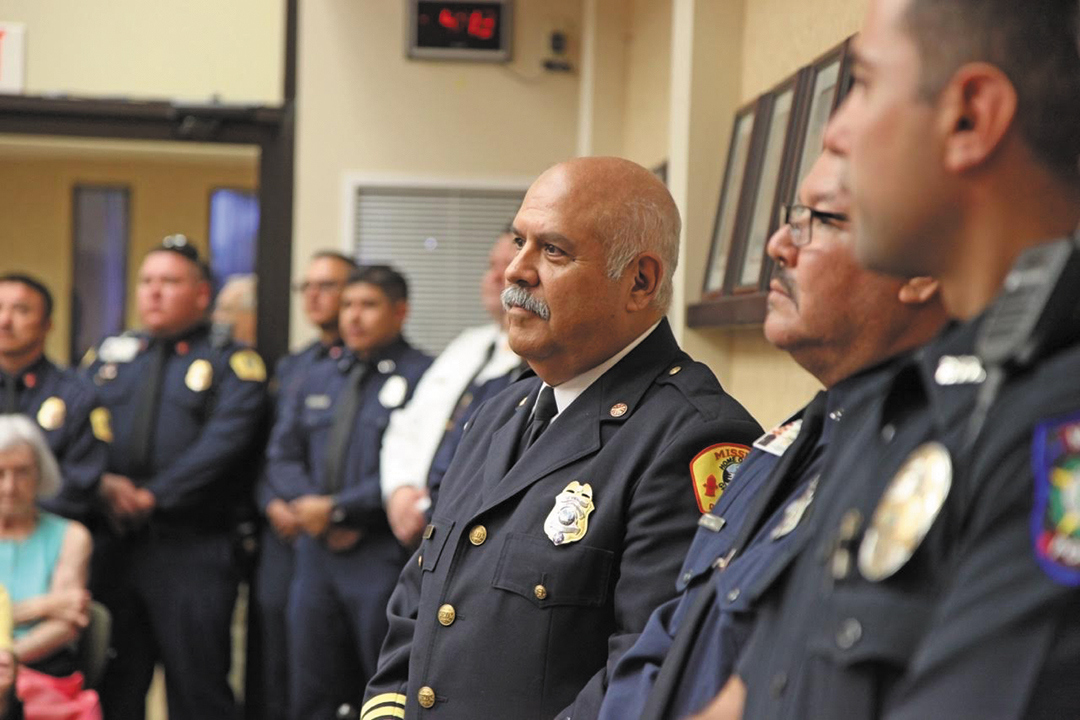 Since then Lopez has seen his share of disasters. Besides hurricanes, among some of the most memorable was the 1980 fire that destroyed a downtown hardware store at Tom Landry Boulevard and Conway Avenue.

“That was my first structure fire as a volunteer fireman,” he said Tuesday in his office at the department’s Central Fire Station at 415 Tom Landry Boulevard, not far from where the fire occurred.  Lopez said that fire was memorable because the store’s owner narrowly escaped disaster when he attempted to unlock the front door for firefighters.

“And a firefighter saw what he was doing and pulled him away from the door. But he’d just turned the key and the door opened and just like the movie Backdraft the flames came flying out the door. And I watched all the windows across the front of the building explode.”

Fortunately no one was seriously injured.

Then there was the 1989 crash of a Mission CISD school bus that killed 21 students after it was hit by a soft drink delivery truck knocking the bus into a flooded caliche excavation pit near 5 Mile Road and Bryan Road.

“On that one I was left alone to man the station and the radios because it seemed everyone in the county responded,” he said.

But today, after all those years, and so many experiences, Lopez will leave the station not for the last time – because he intends to remain a volunteer firefighter – but for the last time as the department’s chief. Rene Lopez Jr. is now officially retired from the position he has held since March 2015 when he replaced outgoing chief Ricardo Saldaña who became Hidalgo County’s Emergency Management Coordinator. Lopez served as deputy chief for 17 years before being appointed to head the staff of 66, overseeing five fire stations, 20 emergency vehicles and a $6.1 million budget.

Dec. 21 would have been his 35 year anniversary with the department, 37 years if one includes the two years he volunteered on a part-time basis earning a small fuel stipend for each call out.  It was 1979 when Lopez began as a volunteer while attending the University of Texas Pan American campus where he was studying to become a biologist.

“That’s my dark secret. I wanted to become a scientist,” Lopez said.

Reflecting back recently on his life as a young man the junior Lopez had no intention of becoming a full-time firefighter.

“Of course back then we had a lot more fire calls because there was no Alton Fire or Palmview, Peñitas or La Joya. There was just the Mission Fire Department that covered all the area. So we were gone most of the day fighting fires, doing  rescues – all kinds of searches. So there was a lot to do. It was an adventure everyday without having to join the military. It was very, very exciting.”

Lopez dropped out of the university in his sophomore year, a decision that he sometimes second-guessed until one day in the mid-1980s when he was the first responder to a downtown area home fire.

“Back in those days there was only one firefighter per truck. And when I arrived there was a young lady standing in the front doorway.    I remember yelling at the lady, ‘Get out of the house. The house is on fire.’ And she looked at me and said, ‘My baby’s in here.’”

Lopez said he rushed into the home to find one side of the living room engulfed in flames.

“The drapes, carpeting, everything was on fire.”

Lopez said he made it through the living room and kitchen to a room in the back of the house where he found a toddler boy in his crib and scooped him into his arms.

“And fortunately there was a back door so we went through it.”

Lopez said he was surprised to see the child’s mother had followed him through the flames.

“She wasn’t going to leave her baby there but she burned the right side of her face and her shoulders. That’s when I realized this is important work. Up until then I was fighting fires but, you know, they were grass fires, businesses, stuff like that – nothing really dangerous. And riding with her and her baby to the hospital in the ambulance that’s when I realized this is really important.”

It’s clear Lopez is liked by the firefighters. He has an easy-going way with them. Several at the station Tuesday said it won’t be the same without Lopez.

Others like emergency medical technician Henry Peña, 40, who has worked for Med-Care EMS as a paramedic the past seven years, say Lopez has left a lasting legacy. He credits Lopez with reducing the response time for paramedics by housing the privately contracted paramedics in the firehouse with firefighters.

“He brought EMT into the house. Before we were like staying in hotels and responding separately. Now we respond with the firefighters so we don’t have to ask, ‘What’s the situation?’ We’re right there with them to see it,” said Pena. “He has been a great chief and great to work with.”

As for life in retirement Lopez said he hopes to spend more time with his wife, Adela Lopez, a teacher at Veteran’s Memorial High School, and his son, Rene Lopez III, 25, and 24-year-old daughter Risa.

Lopez said he also plans to spend more time on his hobby as a ham radio operator with contacts across the globe and visiting Big Bend National Park and Big Bend Ranch State Park in west Texas.

“That’s my love at this stage, the whole big region.  I used to go out there three or four times a year. Now I’ll probably do six or seven times a year.”

If there is one thing Lopez said he will have to get used to is the lack of routine. And the radios.

“All my career I’ve lived with radios so I hear the tone outs, the dispatches, I hear everything. I’m not going to have that anymore.  Those tones will be forever ingrained in my mind.”

City Manager Martin Garza Jr. said he has not yet decided who to appoint from the fire department to act as interim chief but that he will make that decision by Nov. 28 when he will offer that name to the city council for approval. After that the city will advertise for a permanent replacement and he encouraged Mission Fire Department personnel to apply.

Regarding Lopez’s retirement Garza said, “We’re truly grateful for his service and dedication to the city and its citizens and we wish him the best in his personal and professional endeavors.”