Dreaming big is for the bold and the Mission Veterans Memorial Patriots are turning their dreams of making program history into reality this season.

Back in August when practice started, Patriots’ head coach David Gilpin told his squad the goal was to win an Area Championship and advance to the third round of the playoffs, something no team in the 15-year history of Mission Veterans has done. 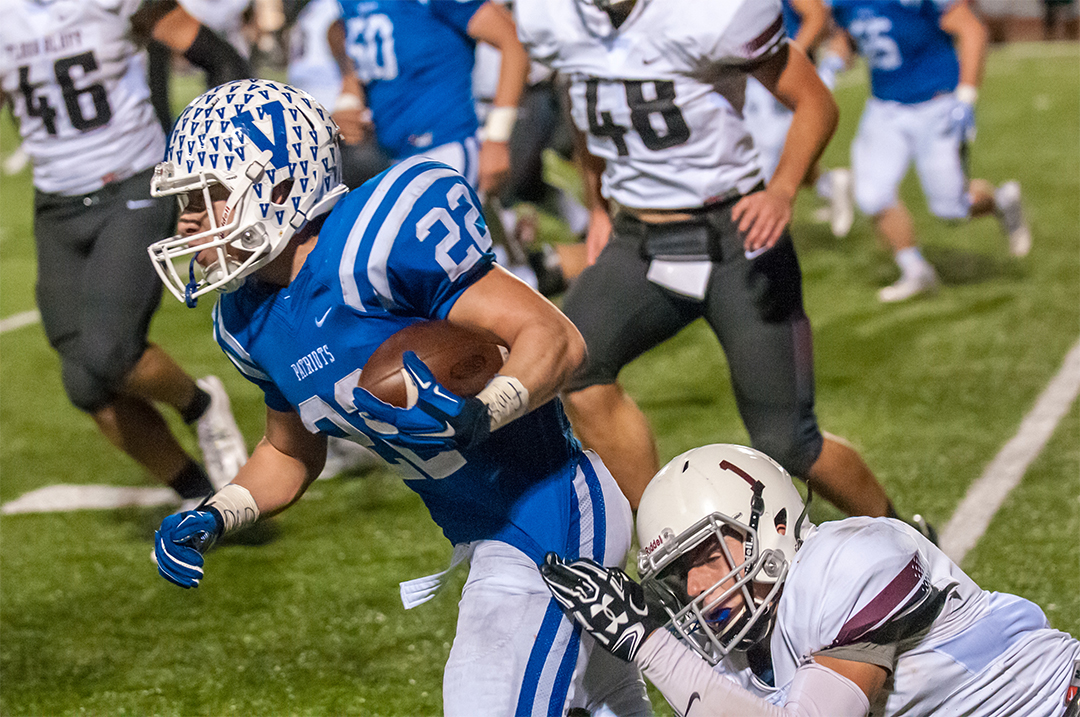 “I dream big, I want this program to dream big, I want our kids to dream big,” coach Gilpin said. “When we talk about playing in the Sweet 16, we talk about practicing during Thanksgiving; when we talk about things that have never been done, that’s exciting to me. I want our kids excited about it, I want them dreaming about that.”
The Patriots knocked down the second round door last Friday by beating the Flour Bluff Hornets 28-14 in the Area Championship game at Tom Landry Stadium with a packed home crowd on hand.

In the game against Flour Bluff, the Patriots faced a 14-7 deficit early in the first quarter, but Gilpin’s squad would respond. Senior quarterback Diego Hernandez finished the game with touchdown passes to three different receivers and also punched one score in on the ground. After giving up touchdowns on the Hornets’ first two drives of the game, the Patriots defense locked down and shut out Flour Bluff on their next 11 possessions for the 28-14 win.

Hernandez said his team was ready to get past the second round of the playoffs after falling just short two years in a row.

“Our coaches made us believe the entire week. After 15 years of this school being open, this door was ready to be knocked down,” Hernandez said. “There’s no feeling like it. Three years in a row we’ve won Bi-District Champions. Every single year it’s “this is the year we’re going to knock the door down.” This was the year that it happened. It’s my last year here and I wouldn’t want to go out any other way.”

Patriots senior middle linebacker Juan Barradas said he’s enjoying the feeling of unfamiliar territory but is ready for the challenge that lies ahead.

“It feels great. It’s an unbelievable feeling because we’ve never been here but we’re not going to be scared going up against anybody. We’re just going to give it 110 percent of our effort and that’s all we can do now,” Barradas said.

The Tigers (11-1, 6-1) earned their spot in the Sweet 16 in dramatic fashion. In a low-scoring affair against the Angleton Wildcats, Dripping Springs needed a last second touchdown on a prayer of a pass with no time left on the clock to squeeze out a 12-11 win.

Gilpin, who took over the Mission Veterans program in 2009, said his team is heading into the third round with confidence and a winning mentality.

“Our kids right now are confident, they believe in themselves, they believe in their coaching staff. I talk to them all the time about putting a chip on your shoulder, getting your chest out and saying, “hey, come knock it off”, and that’s the mentality we’re going to go with,” Gilpin said.

The Patriots are ready to take their game up north for a win or go home showdown with the Dripping Springs Tigers.

Senior running back Johnny Martinez, who posted 73 rushing yards to go with receptions for 56 yards and a touchdown against Flour Bluff, said this team is feeding off each other and is relishing the opportunity of a chance to win and be one of eight teams remaining.

“It’s one heartbeat and we’re all motivated by each other,” Martinez said. From playing little league football to now this, it’s been an awesome experience.”

The Regional Semi-final playoff game between the Patriots and the Tigers is set for 2 p.m. Saturday at Alamo Stadium in San Antonio.