It took eight years but Mission Veterans Memorial Patriots’ head football coach David Gilpin finally got his wish; getting to hold football practices during Thanksgiving week. Very few high school football coaches get to do that every year because only a select few football teams across the state of Texas extend their seasons into the third round of the UIL state playoffs that takes place Thanksgiving weekend. And that is exactly what the Patriots did this year for the first time in school history.

While Gilpin’s wish did come true this year, it wasn’t wishing that made it happen. It was hard work. Hard work that started three to four years ago when the seniors on this year’s Patriots team were freshmen and sophomores, hard work that extends well past the end of one season and begins well before the start of the next, and hard work that doesn’t always result in success in the playoffs. But when it does, it makes it worth all the work and preparation it took to get them there. 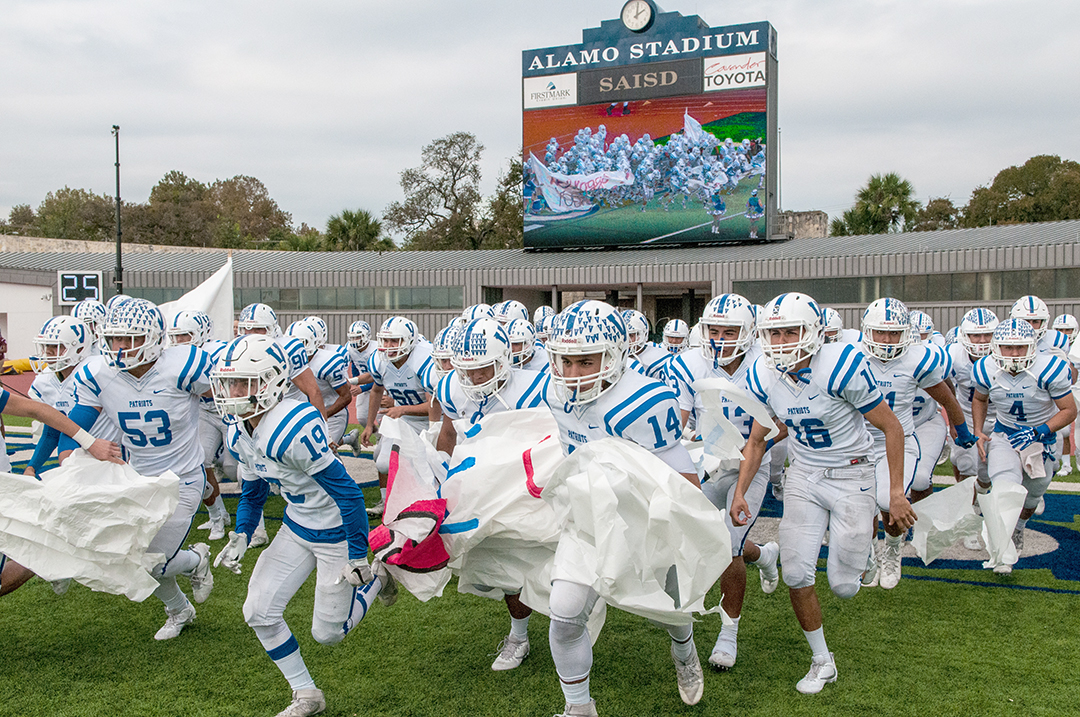 “It was everything that I expected it to be, and more,” Gilpin said about having a game to prepare for last week. “It was just the greatest joy to come in throughout the week, have our practice and get our field work in. We were able to have a Thanksgiving luncheon on Wednesday served by the parents, then we came in on Thanksgiving Day and had a good hour of practice, which is something we had never done before, I was just ecstatic about the extra week of practice.”

The fact that the Patriots met their match Saturday afternoon when they went up against the Dripping Springs Tigers in San Antonio’s Alamo Stadium and lost 35-69, did nothing to diminish Gilpin’s enthusiasm over what his team accomplished this year.

“There were only four Valley teams left in the playoffs going into this weekend and we were one of the four,” expressed Gilpin immediately after the Patriots’ loss. “We take great pride in that and the area we’re from, and to be one of the last teams standing from our area means a lot to us. The bottom line is that when you get beat by a better team, go out and play with some character and our kids did that.”

“I have absolutely no regrets about today, none,” added Gilpin. “I wish that things had broken a little differently for us at the beginning of the game, but that’s football. It is what it is. We had a great year and we made history. At this point and at this time with our season having come to an end, all I can say is that I’m proud of our kids, I’m proud of our coaching staff, I’m proud of this great community and the administration that’s out here supporting us today, and I’m proud of the media that turned out to cover us.”

Despite the loss, Patriots’ senior quarterback Diego Hernandez had one of the best games of his career Saturday. He threw a touchdown pass of 39 yards to sophomore Landry Gilpin, touchdown passes of 25 yards, 13 yards and 11 yards to senior Jacob Guerrero, and ran one in himself from 5 yards out as well.
After the game, and after spending 20 minutes hugging and posing for pictures with family and friends, Hernandez discussed how he and his teammates never gave up against Dripping Springs despite the lopsided halftime score.

“At halftime Coach Gilpin asked us to keep fighting and keep swinging until the end and that’s what we did,” Hernandez said. “That’s what we’ve done all season long. Whenever our backs have been up against a wall we’ve all stepped up, listened to our coaching staff and fought. But I couldn’t have done it without the support I’ve had from my Patriot football family and my real family that have been there for me even during my freshman and JV years.”
Guerrero, who like Hernandez played his last game as a Veterans Memorial Patriot Saturday, took a few minutes after the game to reflect back on what being a Patriot has meant to him.

He said, “It’ meant a lot, especially getting to play under the great Coach Gilpin. Also, making history and setting the standard for those that will come in the years to come. It’s meant the world to me to get to play here these past four years and to accomplish great things with this program.”

Senior defensive back and kick returner Jacob Garcia set up two of the Patriots’ touchdowns with kick-off returns of 79 yards and 62 yards. When asked what being able to provide a spark to the offense, not once but twice, meant to him, he said, “It means a lot to me to be able to contribute to my team and helping them to get something going. It was just amazing, that feeling of being able to help the team.”

The Patriots have now closed out their 2016 season with an 8-5 overall record, but more importantly as Bi-district and Area Champions, and as the last Valley team to be eliminated from the playoffs.