Tears were rolling down Helen’s blindfolded face Sunday afternoon as she waited to see her brand new home.

Helen, 81, whose full name and address are being withheld at her request, has been living in a school bus in north central Mission for 15 years. She’s lived with no running water and uses a long extension cord connected to a meter for electricity. But thanks to a campaign spearheaded by Mission small business owner Homer Garza, Helen now has an RV to live in. 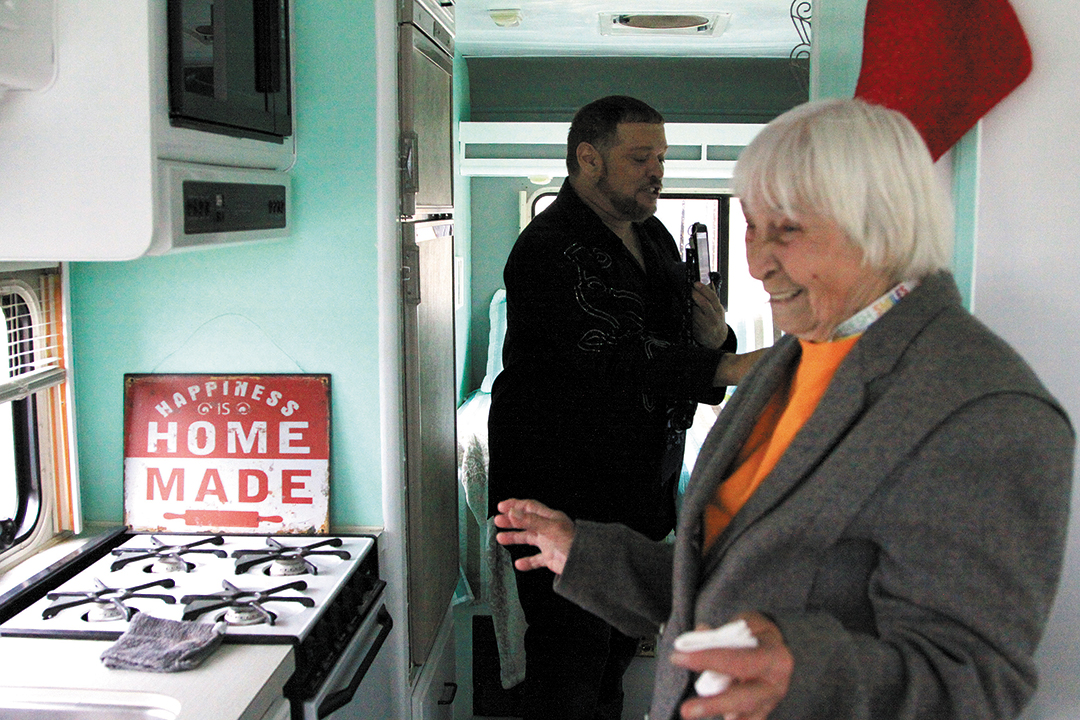 Garza presented the RV to Helen at a celebration held at one of his Mission businesses off Conway Avenue and FM 495. Garza and friends who all contributed to purchase the RV attended the celebration.

“I’m sorry we took so long to get to you, but we did,” Garza said tearfully as he guided a blindfolded Helen to the RV. “It’s my honor to give you this home today on behalf of myself and my good friends. They gave their hearts to this.”

Garza then removed the blindfold and hugged Helen as she gasped at the RV, a tan, 1991 Tioga by Fleetwood.

“Oh my goodness,” she shouted through sobs as she hugged Garza. “What a beauty.”

Garza led Helen on a tour of her RV, which included a kitchen, a bathroom, a twin bed and a 32-inch TV that was donated by one of Garza’s friends.

During the tour, Garza pointed Helen to a sign in the kitchen that reads, “Happiness is homemade.”

“You’re going to have a good night’s rest tonight,” Garza told her.
“You better believe it,” Helen replied.

An Army veteran who worked as a lab technician in institutions such as the Texas Children’s Hospital in Houston, Helen has had her school bus for nearly 20 years. She purchased it with plans of converting it to an RV as a gift for her mother.“My mother suffered a massive stroke and was bedridden as a result of it,” Helen explained. “She wanted to see her brother before she left so I got the idea of buying the bus as a way to accommodate the hospital bed so I could drive her to see her brother.”

Unfortunately, Helen said her mother died days after she purchased the vehicle. Eventually she drove it to the Valley and moved in on a lot the owners let her use for free. Years later, Garza reached out to Helen after years driving by her bus daily without knowing anything about her.

The 49-year-old Garza said he often wondered if he should stop by and see if the woman who lived in the bus needed help, but was too shy to stop by.

“I kept thinking, ‘What if when I stepped into the property someone would step out of the bus with a shotgun, how would I get out of that situation?’”

That all changed for Garza last November when Helen moved the blue school&nbsp; bus into a different location on the lot, which caused Garza to fear for the worst.

“When I drove past it and didn’t even see the bus in the lot and thought it had been removed because the person living there had died,” Garza recalled. “I instantly felt regret because it made me realize that I never did anything for [Helen] when I could’ve. Even when I found out she simply moved the bus, I couldn’t help but wonder, ‘Is another day going to pass by without me doing anything for her?’”

Garza, who has an active presence on social media, turned to Facebook for help. He made a public post asking for information on Helen and revealed a plan to surprise her with an RV to keep her warm this winter. Garza asked for donations from friends to help cover the cost of an RV.

“When I first thought of starting ‘Project Helen’, I knew that anybody who lived in this town has seen the bus she lived in and knew what we were dealing with,” Garza said. “All my friends agreed that she needed help based on her living conditions and I got so many positive reactions to this campaign, and that’s when the donations rolled in.”

Within a week of his Facebook posting Garza’s friend, Freddy Valdez, promised to pay for a&nbsp; $1,200 RV Garza found through a Craigslist ad.

Garza said 23 people donated to ‘Project Helen’ but Valdez’s $1,200 contribution was the largest.

“When I first heard of Project Helen, I thought it was such an eye-opener just to hear of Helen’s living conditions,” Valdez said. “I wanted to help but I worried that if everyone gave small donations to the project, it would go nowhere. I knew the campaign would have a much bigger impact if someone made a big donation.”

Garza then reached out to Helen to let her know about their plans.

“When Homer first called me, I was wary and wondering why a stranger wanted to offer me a new home,” Helen admitted. “But he sounded really nice and friendly and I was just touched by his generous offer.”

Garza periodically updated donors and Helen on the project on his Facebook page as he spent nearly three weeks searching for a move-in ready RV for her.

According to Garza, the initial RV he planned to buy ended up being in such poor condition he decided to continue shopping once he saw how more people were still donating to the project. Ultimately, he settled on the used Tioga, which had 64,000 miles on it and cost $3,500. However, the owner agreed to lower the asking price by $500 after learning about Helen.

“Everyone came together as a community to help Helen and it’s so blessed to witness all of that,” Garza said, adding that a plumber has offered to hook her RV to a permanent water line and an electrician has offered his services as well.

“Helen is more than worthy of this gift for contributing to our system by working in hospitals and serving in the army,” Garza said. “I hope when I’m her age and if I’m living in a cardboard box or a bus, somebody will reach out and help me. Helen is someone filled with knowledge and stories and it’s such an enrichment to be near people like her.” Garza also said he is meeting with the Food Bank of the Rio Grande Valley to get them to deliver groceries to Helen.

He is also allowing people to drop off any items they’d like to donate to Helen at his movie rental store, “Movie Night,” at 2718 N.Conway Avenue.

With a new RV to keep warm this winter, Helen said she plans on keeping her school bus for storage and cannot wait for her first Christmas in her new RV.

“It’s absolutely beautiful to see total strangers with big hearts welcoming me into their lives,” Helen said. “I am so grateful and I just don’t have the words to thank everyone for today. Even though I live alone, I now know I am not lonely.”