When Eli R. Ochoa was in second grade his father, Ciro, a Mission Barber and businessman, hired a friend to design and build a new home for his growing family. It was an act that would shape who the younger Ochoa would become, a regionally known architect whose recently completed McAllen Performing Arts Center has been compared to New York’s Lincoln Center and Washington, D.C.’s John F. Kennedy Center for the Performing Arts.

“We knew when we were designing it that we were designing something special,” Ochoa said Tuesday in the conference room of his McAllen-based firm, ERO Associates. With his Belgian Malinois, LaLa, sitting nearby Ochoa, 60, called the McAllen PAC the crowning achievement of his 30-year career, but not the last achievement. Among other projects his staff of 30 is designing are two high schools for the Houston Independent School District as well as projects for the University of Texas and the South Texas College’s new nursing building. 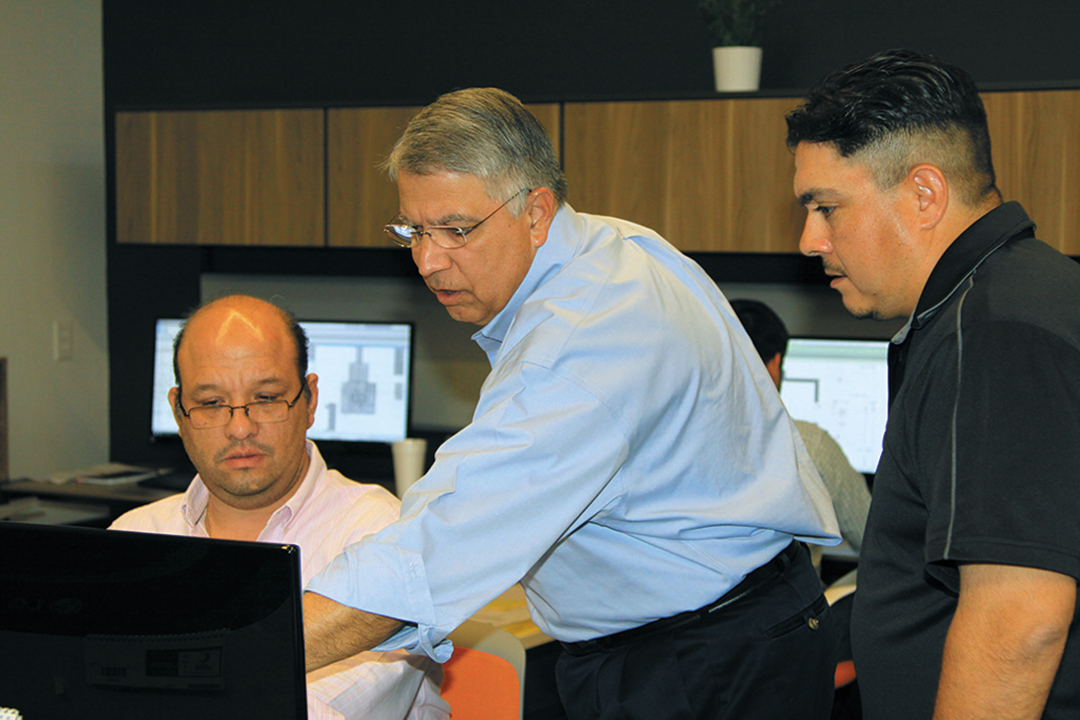 Ochoa said perhaps his most gratifying accolade for the McAllen PAC came from singer Tony Bennett, who performed at the center Dec. 6.

“He alluded to the point this was one of the best, if not the best performing arts center that he’d ever performed in. That was a very nice testament to what we’ve done. It’s definitely world class,” Ochoa said as his staff continued working in the open, classroom-sized workspace behind him.

Ochoa, who moved from Mission to McAllen six years ago, said the McAllen PAC is more to him than just an acoustically sound music hall, it’s the culmination of his design philosophy.

“I have a design philosophy I’ve been following for a long time which is respecting the land, the people and the history. And so before we start designing we do a lot of research into the historical aspects of the land,” he said.

As examples of design elements tying the center to it’s site are the use of Pecan, the Texas state tree, for the overhead acoustical diffusers; the use of Mesquite, ubiquitous to the Southwest, for the center’s grand stairway, and the colors and form of the Bougainvillea to decorate the center’s seats.

He said the colors in the main auditorium, browns, golds and blues, were inspired by the colors of the Indigo Bunting, a small bird that traverses McAllen during its annual migration between north and south and changes colors with the regions.

The building’s exterior is an homage to McAllen’s moniker as the City of Palms. Ochoa said the tree’s trunk was the inspiration for the exteriors’ multifaceted configuration.

Ochoa noted the center’s round turret in the front is representative of the gone but not forgotten smoke stack of the steam-powered engine that once pumped water from the Rio Grande River to McAllen. And the turrets’ placement, intersecting with the tree-lined arcade that encircles neighboring Oval Park, ties the center to its location.

“Most might design aesthetically. They just design a building that’s pretty. It’s a beautiful building but it could be anywhere U.S.A.  It really doesn’t have ties to anything,” Ochoa said. “You can design contextually in that you use similar materials and colors from the surrounding development, much like a university where all buildings are kind of alike. But when you take it to that third degree, that nth degree, is when you start incorporating cultural elements into the design. And that’s what really ties a building to its area, to its region and to its location.”

Though architect Frank Lloyd Wright was known for melding his architectural designs with their environment Ochoa disavows any inspiration from the iconic designer.

“I can’t really say I was inspired by any particular architect,” Ochoa said. “I was really more inspired by being raised in south Texas. For me our culture, our land; the people down here were all inspirations.”

Ochoa said if there was one person who most inspired him it’s his father’s friend, Arturo Guerra, who designed and built the new home for Ochoa’s family back when he was a second grader.

“And from second grade I’d go over to Arturo’s office and watch him draw plans for the house. And then after school every day I’d go over to the construction site and watch those plans take shape and I just loved it. Ever since then I knew that’s what I wanted to do,” he said.

While working for Guerra, Ochoa obtained his engineering license. He worked for Guerra until 1986 when his attitude about living in Austin changed. It happened when he was unable to take his first born daughter, Laura – about 18 months old at the time –  home for Thanksgiving to Mission to visit with their extended family, a family he said counted up to 80 persons gathering at his parents home after Sunday mass each week. Ochoa said he had an epiphany as he and his wife, Dr. Velma Menchaca, today a professor and department head at the University of Texas Rio Grande Valley, had Thanksgiving dinner in a restaurant that year.

“We’re eating and both of us are just down in the dumps,” Ochoa recalled. “I just finally threw my fork down on the table and said, ‘the heck with this, we’re moving back to the Valley.’”

Ochoa said he decided to open his own structural engineering firm in Mission and found his first client on the first Monday after New Years 1987 landing a contract designing the expansion of a warehouse.

It was my first day on the hunt and I found a job knocking on doors,” he said.

What may appear to be an artist’s rendering of McAllen’s Performing Arts Center is an actual photograph with a real person taking advantage of a lakeside ramada about 12:30 p.m. Tuesday. The center is thus far the crowning achievement of Mission native Eli R. Ocha’s 30-year architectural career but as he said not his final achievement. Progress Times photo by Joe Hinton

Ochoa said his business grew as be obtained clients who otherwise would have sought the services of Austin-based firms. And in 1995 he merged his consulting firm with an architectural firm known then as “The Austin Group.” He said that arrangement worked fine until one day he found himself soliciting a contract for the Hidalgo Independent School District in competition with another consulting firm.

“And I did the presentation for our office and a competing architectural firm said basically right there in front of everybody, ‘Don’t hire Eli’s firm, he’s not an architect he’s just an engineer.’ Needless to say you don’t say that to an Ochoa.”

Within three months Ochoa had passed the exams needed to obtain his Architect’s license and from there business blossomed to the point in 2001 he established ERO Architects.

In the intervening years his firm has designed 55 high schools, including Palm View in the La Joya ISD, 26 middle schools and 92 area elementary schools.

His firm has also rendered designs for the planned Hidalgo County District Courthouse, the University Center at Texas State Technical College, the engineering building at the University of Texas Pan American campus and the nursing school at South Texas College, among many other projects.

During this time his daughter Laura, now 33, became a teacher in the Pharr-San Juan-Alamo Independent School District. And he had three more children, Joseph, 32, a San Antonio salesman, Andrea, 25, a Ph.D. candidate who is a cancer researcher, and his youngest, Eli junior, who will graduate this year from Veteran’s Memorial High School and then study business at The University of Texas.

Looking back on his life Ochoa said his biggest obstacle occurred when he was a junior at Mission High School planning his future after graduating.

“I’ll never forget it,” he said smiling. “The counselors were telling me, ‘you’re not going to make it, number one, so you might as well just stay here, go to the local technical college – which at the time was Texas State Technical College – and get a degree in drafting. And then you can stay around here and work.

“But that’s not what I wanted.  I was raring to go because I had seen it done,” he said referring to watching Guerra build his family’s new home. “And I knew I could do it.”

Ochoa likes to point out that he was not the only success in his family. Both his older brother, Ciro Ochoa Jr. and younger brother Lino, are attorneys.

“So mom and dad not having any college experience raised two attorneys, an architect and an engineer. Not too shabby.”