Chemistry is one of the most difficult subjects high school students ever take. However, when it comes to members of the Veterans Memorial Lady Patriots basketball team, they seem to be having no trouble at all with chemistry – team chemistry. Their winning record despite having only three seniors on their roster is a testament to that.

With the 3-2 Lady Patriots’ starting five consisting of a freshman, a sophomore, a junior and two seniors, team chemistry is something head coach Rafael Cantu, Jr. knew he would need to develop and develop quickly if his team was going to put together a winning season in the newly revamped, nine-team District 31-5A. 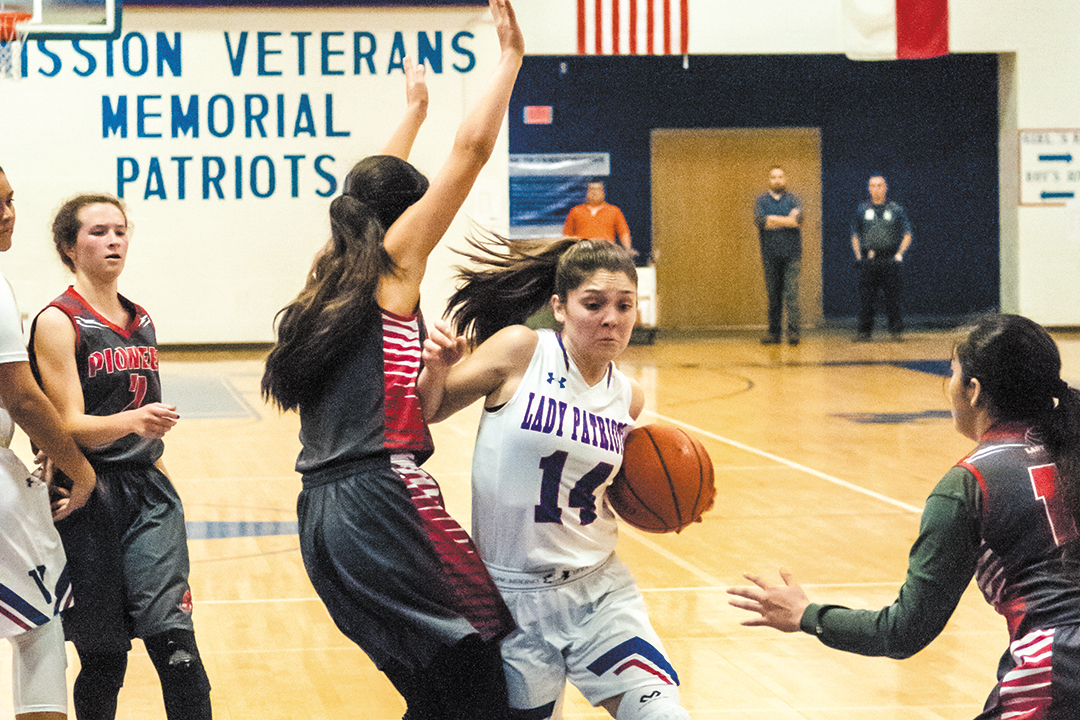 “The whole secret is good chemistry,” Cantu said. “There’s no way that a team can succeed without it. The older players have done a great job of helping the younger ones and the young ones have done a great job of listening to the older ones. They all understand that the only way we can be the best team we can be is by playing as a team and everybody doing their part and helping each other.”

The youngest member of the Lady Patriots’ starting five is freshman point guard Veronika Cantu. While she is Coach Cantu’s daughter, it is her ball-handling skills and her unselfish play that have earned her a spot on the varsity squad and not the fact that she shares much more than a love of basketball with her coach.

As for how he is handling having his daughter on the team, Cantu said, “One thing I’ve told her is that during the game I’m her coach and after the game and off the court I’m her Dad. I’ve also told her that I’m going to expect a lot from her because she is the point guard. And the point guard is the player that runs the show and makes sure that the team is operating at the level it should be. She loves to make passes and get assists and she takes a lot of pride in making her teammates better and that’s what it takes to be a good point guard.”

For a freshman to be a starter on a team that earned a Bi-district championship the year before and lost only two starters due to graduation is an accomplishment that Veronika herself is not taking lightly.

“It means a lot to be on the varsity,” the 5-foot-2-inch 95 pound freshman said. “It tells me that coming up from junior high, I’ve proven myself. But I couldn’t have done it without the help of my teammates.”

When asked about her willingness to pass the ball to a teammate instead of going in for the shot herself, Veronika said, “A lot of people tell me that I should go in for the shot and while I am a pretty good shooter, I would much rather give it to one of my teammates if they are open. I am not a selfish player. I like to give my teammates the ball.”

As one of the three seniors on the team, forward Lyndsey Garza is now on her fourth year as a member of the Lady Patriots’ varsity squad. When asked what she sees as the secret to the team’s success so far, Garza said,” We’ve been working a lot together. We’ve been running a lot of plays that don’t just involve one person but everybody. We just have really good chemistry and we’re working together as a team.”

Sophomore Jackie Howell plays low post for the Lady Patriots and is a second-year member of varsity. As a member of last year’s Bi-district championship team, Howell has even loftier expectations this year.

“We all have high expectations,” shared Howell. “We feel like we’re doing really well in our district and if we keep playing the way we have been we should be able to go farther this year than we did last. We’re off to a good start but we can’t be satisfied with ourselves. We have to keep pushing ourselves to get better because we know that in the playoffs things get harder and teams get tougher.”

The Lady Patriots’ next game will be at home against the Rio Grande City Lady Rattlers Dec. 30. That game is schedule to tip off at 6 p.m.