Winter is here but the hardwood is heating up.

District 30-6A boys basketball is back and the race for a top four finish is underway as the seven teams that make up the district are competing for a postseason berth. 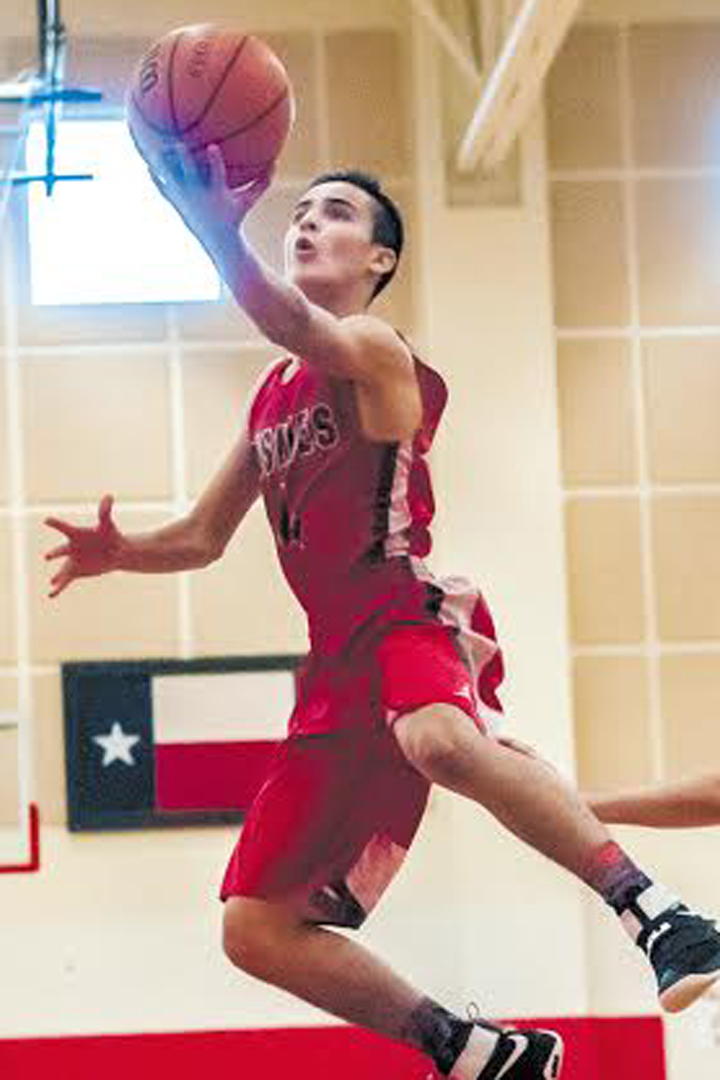 Juarez-Lincoln junior shooting guard Eduardo Torres goes up high for a lay-up during the second quarter of the Palmview Lobos’ 64-44 District 30-6A win over the Huskies. Progress Times photo by Luciano Guerra

The Palmview Lobos are a team that has experienced recent success, qualifying for the postseason in four of the past five years. Head basketball coach Andy Saenz’ team has a towering team that plays from the inside out, running the offense through 6’4” senior swing forward Ever Perez and 6’0” junior center Paco De La O while senior guards John Castanon and Tristen Myende attack from the outside in.

“Try to get better every day, I don’t want to look too far ahead,” Saenz said. “We’ve been fortunate to make the playoffs four out of the last five years so that’s something that we strive for. We know nothings given, everything is earned so we just try to get better everyday in practice and keep working hard.”

The Juarez-Lincoln Huskies (13-11) are a team on the come up, led by head coach Albert Carrillo and junior center Luis Garza. Garza is averaging 13.1 points per game from his post position but is not afraid to extend his offense beyond the paint. The Huskies play a style of defensive basketball that puts pressure on the opposing offense by guarding them for 84 feet.

The two teams battled on Tuesday at Palmview High School for a District 30-6A rivalry game between the sister schools, the first time the team’s meet this year.

The Huskies pounced on the Lobos early on their home floor, jumping out to a 20-8 lead in the second quarter by forcing Palmview into uncomfortable positions on the court and Garza attacking the paint.

The Lobos climbed back in the game by attacking the Huskies inside with the play of De La O, whose strength on the low block provided the scoring Palmview needed to claim a 30-22 lead going into halftime.

The Lobos locked down in the second half, ultimately coming away with a 62-42 win. The victory improves the Lobos to 2-0 in District 30-6A action while the loss moves the Huskies to 0-2

“Early we were knocking down shots and going at it; we had a lot of intensity,” Carrillo said. “I’d like for our team to continue to be aggressive and be confident in themselves. Once we get down on the scoreboard we can’t give up.”

The Juarez-Lincoln Huskies next opportunity to pick up a district win will be tonight on their home floor as they host the Mission Eagles at 7:30 at Juarez-Lincoln High School Gymnasium.

After Palmview’s win and moving to 2-0 in district play, Perez said he liked what he saw from his team in their comeback effort as the Lobos are focused on each 30-6A game.

“I liked the intensity we showed here today, that’s the kind of character we have,” Perez said. “Our goal is to make the playoffs for the fifth year, which we’ve never done. We just have to play together and play as hard as we can. Right now we just want to take one game at a time and take care of business.”

The Palmview Lobos are in action tonight as they take their game on the road for a clash with the Rowe Warriors at 7:30 for a matchup between District 30-6A playoff contenders.

Saenz knows his team has the ability to claim one of the top four spots in District 30-6A and is looking for his team to put in the work to do just that.

“They play hard and we’re just looking for a little more consistent play so that’s something to strive for as the games go on and in district. So it’s of the upmost importance for us to play consistent to put us in a better position to win every ball game because we know how hard this district is,” Saenz said. “The kids are up for the challenge and they work hard so we just have to keep working.”