It was Black Friday 2016 around noon on a perfect day for 32 souls including owner and captain Johnny Hart and his wife and business partner, Jennifer, to cruise the Rio Grande River aboard the 55-foot long Riverside Dreamer. Under the power of twin 135-horsepower Honda outboard motors the boat, 12 feet wide and with a seating capacity of 49, headed east from its dock in the 200 block of Chimney Shades Road on a one hour tour of a small fraction of the 1,896-mile-long river south of Mission.

Some on board came from as far away as Canada and Los Angeles providing a first timer’s perspective on the view of two nations from the river’s confines. Others were native Texans who provided a nostalgic reminiscence of past area experiences. 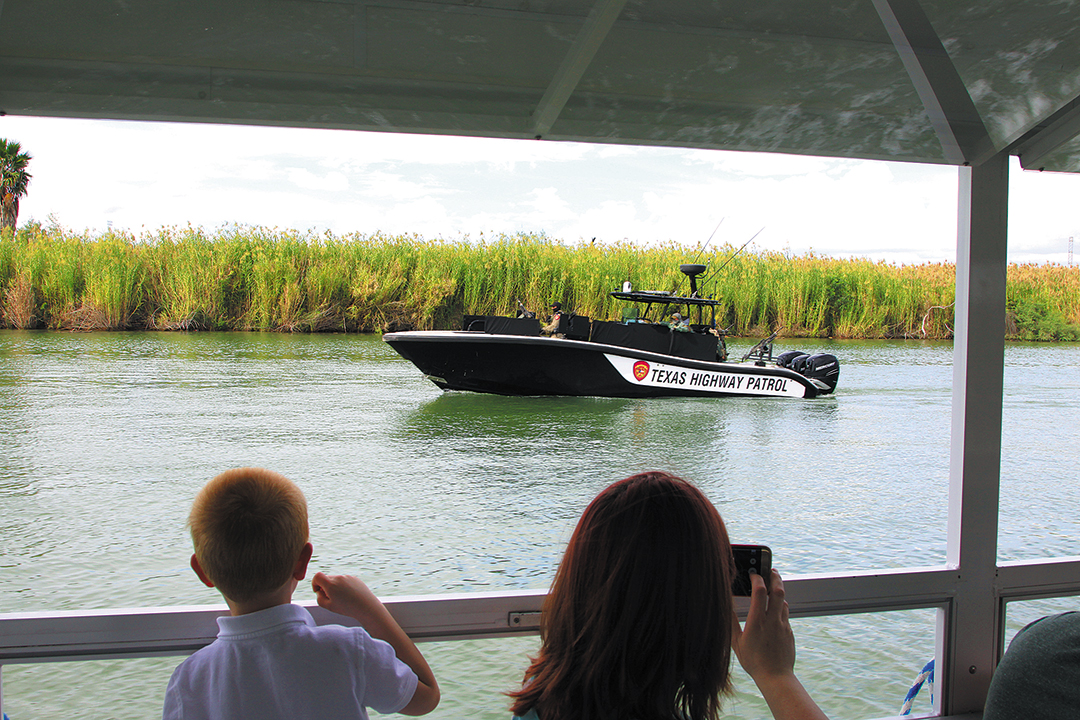 A Texas Department of Public Safety gunboat was one of the sights sparking conversation among patrons aboard the Riverside Dreamer on the Rio Grande River south of Mission on Black Friday.
Progress Times photo by Joe Hinton

The first part of the boat’s route consists of about a 15 minute cruise east from the boat’s dock to the Anzalduas Dam where a passenger’s view east over the dam is of a more natural river, the way it appeared before it was damned in 1960 to provide irrigation and flood control for both sides of the border. Above the dam the view along the riverbanks is a different story with water as deep as 50 feet in places, said Hart.

If there was one impression some first timers and old timers shared it was that the U.S. side of the river – at least within the confines of the one hour river tour – appeared more the undeveloped side than did Mexico’s side.

Passengers cooed at the sight of what appear to be million-dollar homes along the Mexican riverbank as well as parks and private campground developments. On the U.S. side there was mostly undeveloped land, an RV park, a few modest homes and the Riverside Restaurant also owned by the Harts.

“Guess they don’t have to worry about people passing through their back yards to get into the country,”  quipped Will F. Betzner, 82, a retiree from Connecticut now living in Kerrville, regarding the expensive homes on Mexico’s riverbank.

“Sure would be a shame to block that view with a wall,” said his companion, Maureen H. Granflaten, 77, a retiree from South Dakota also now living in Kerrville. “Would have to be a glass wall.”

Having run his river tours since 1982 when he started with a 27-foot boat – the Riverside Dreamer is Hart’s third river cruiser, custom built 10 years ago – at 62 Hart said he has heard similar comments from passengers over the years. Hart said he points out to passengers much of the land on the U.S. side of the river is owned by the U.S. government and is protected wildlife habitat. Other parts are farmland where sugar cane is grown.

“They try to compare it to lakes and waterfronts inside the U.S. and that’s not the case,” Hart said in a telephone interview two days after the boat tour. “A lot of them think there should be tons of restaurants and condominiums overlooking the water. But you know it’s all a flood zone inside that levee so most people won’t even build inside the levee. They don’t understand that,” Hart said referring to a portion of 100 miles of levees constructed along the U.S. side of the river to control flooding.

As for the Mexican side of the river, Hart cannot speak for the developers. But he attributes the development to being on the fringe of Reynosa, a city of around 600,000 residents.

“So that’s a very heavily populated area,” he said.

Another observation  made by some aboard was the presence of the U.S. security forces along the U.S. side of the river. The boat passes three mobile observation towers manned by the Border Patrol. As part of his observations made over a public-address system Hart told guests the river was patrolled by the Texas Department of Public Safety, the U.S. Border Patrol and Texas Game Wardens. As if on cue a pair of DPS power boats appeared, heading at a high rate of speed until they approached the Riverside Dreamer and reduced power to a crawl. Guests on the boat appeared somewhat in awe of the two gunboats, one man commenting they looked like a scene from the movie, “Apocalypse

Now,” which featured a Navy PT Boat crew patrolling waters in Vietnam during the war. Both DPS boats were equipped with machine guns mounted on each corner of their sterns and another forward, each protected with armor shields. Each boat had about a half-dozen officers all donning military-style combat gear and most wearing either black or olive drab-colored ski masks covering their faces.

Hart again spoke to passengers over the PA system. “People ask me if the river is safe. What do you think? I think this river might be one of the safest places in the whole country.”

The sight of such heavily armed officers on the river was a surprise to Marianne F. Pacifico, 56, who along with her three sisters were visiting from Toronto.  She said the Border Patrol does not make its presence quite as obvious along the border with Canada.

“No they definitely don’t. And we grew up near a border town,” said Pacifico, who called the gunboats presence intimidating.

“I think that was their intent to be intimidating,” said Hart. Who added he has never communicated with the gunboat crews.

The heavy security presence caused some on board to recall the days before September 11, 2001 and more recently the violence caused by narcotics traffickers, making many believe it is unsafe to travel south of the border.

“Our parents used to take us bird hunting near Reynosa and the Mexican boys would fetch the birds for the hunters,” recalled Pharr native, Robin A. Cramer, 68, a retired area school teacher who now lives in McAllen. “I can’t remember the last time we went down there (to Reynosa).”

Cramer was on the cruise with her 41-year-old daughter, Marissa A Cramer, who brought her boyfriend, Chris J. Webb, 35, from Los Angeles. The younger Cramer and her mother ticked off a list of restaurants and clubs in Reynosa they no longer frequent.

“It was a right of passage in high school to go to the clubs in Reynosa,” said Marissa Cramer. “But not anymore.”

As the boat returned to its dock it once again passed a mobile Border Patrol observation tower.

“Wave to hello the Border Patrol,” Hart said over the PA. Several passengers did.