The date Friday the 13th usually has a negative connotation, but we’re here to change that.

Starting tomorrow,  you can get a one year subscription to the Progress Times for just $13 for the next two weeks, that’s a $20 value!

All you have to do is call our number at (956)585-4893, subscribe online or come to our office to drop off a subscription order form available in tomorrow’s issue.

Still think Friday the 13th is an unlucky day? What if we told you that if you subscribe to our newspaper before Jan. 27, you’d be automatically entered to win a Family 4 pack to RGV Vipers? Subscribe when before the deadline and click below for our preview of tomorrow’s front page stories. 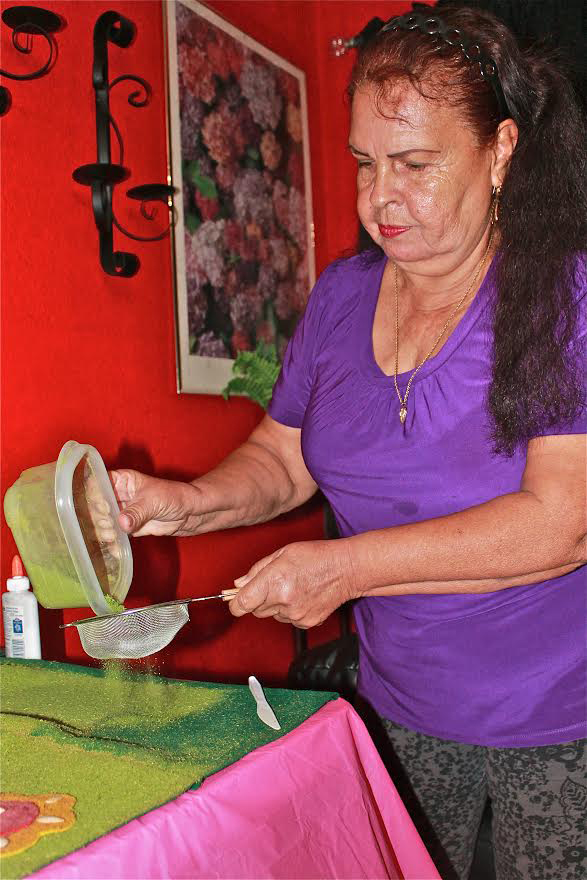 Jovita Garza sifts some dehydrated and pulverized leaves from orange, lemon and grapefruit onto the costume she is making for the annual Citrus Fiesta Costume Show on Saturday, Jan. 14 at the Mission Community Center.
Progress Times photos by Henry Miller

Looking to discover the aroma’s origin one’s eyes fall on bright colors on her living room wall with tables and sofas covered with what one might first assume are craft items.

Those items, however, are much more. They’re also the reason for that fresh smell.

For more than a month Garza and family members have been preparing their entries for the annual Texas Citrus Fiesta Product Costume Show where rules require costumes are comprised of at least 50 percent of citrus and other products grown in the Valley and incorporated into costumes that include evening gowns, hats and accessories.

That was the reaction Geoffrey C. Hazard Jr., had to some travel reimbursement records showing judges spent thousands attending continuing legal education conferences in 2016 and one judge whose staff was reimbursed for attending a two-night retreat in a three-bedroom South Padre Island condominium. The judge who filed for the retreat reimbursement said he created it to “Encourage employees to embrace change and sharpen their skills. Team Building.”

Mission’s City Council has taken measures to assist children and families in need by approving the use of one building and the construction of another.  The council also approved funding to pay for body cameras for its police officers.

On Jan. 9 the council agreed to lease for $1 a year the Strickland Building on Conway Avenue to be used by the Children’s Advocacy Center.  Currently the closest center is in Edinburg.

SULLIVAN CITY— Juan Cedillo likes to think of himself as persistent and hopes members of the Sullivan City council will feel the same.

“When given the opportunity, I can get things done. I feel I can do some good here,” he said.

Cedillo was named city manager of Sullivan City during the Dec. 20 city council meeting two months after his predecessor, Judy Davila, announced she would step down from the position.

According to City Secretary Veronica Gutierrez, Davila accepted an unspecified position with the Texas Department of Public Safety after serving as city manager for five years.

“Everything Davila did was for the betterment of the city and now that she’s stepped down, we’re looking to create a better future,” Gutierrez said. “Cedillo is a well-rounded man with great experiences and I’m happy he’s on board. The city is ready to expand economically and professionally with him.”