12 years. That’s how long it’s been since the La Joya Coyotes boys’ basketball program have been crowned district champions.

Head coach Eric Montalvo is in his second year calling the shots at his alma mater, where he was a standout on the court for the Coyotes from 1997-2000. 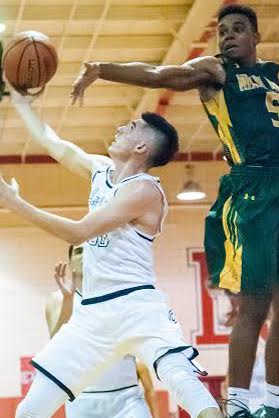 He has turned things around and has this year’s squad focused on putting La Joya back at the top of District 30-6A.

“It’s a goal we’ve been talking about and if I’m not mistaken it’s been 12 years,” Montalvo said. “That’s something we tell our kids every day, that we can do something special if we stay humble and work hard.”

The Coyotes (21-7, 5-0) are currently riding an eight-game winning streak and are the only unbeaten team in the in District 30-6A after knocking off the Nikki Rowe Warriors (20-6, 4-1) by the score of 54-41 Tuesday night in a clash between playoff hopefuls.

La Joya senior Julio Gonzalez goes up for a layup as a Nikke Rowe defender goes for the block during the third quarter of the Coyotes 54-41 District 30-6A win over the Warriors Tuesday night. Progress Times photo by Luciano Guerra

The Warriors entered Tuesday night with a hot streak of their own as winners of six straight games. The two teams had met once prior to district play at the City of Palms Tournament in December where Rowe defeated the Coyotes 60-32.

On Tuesday night, the Coyotes were locked in on avenging the loss with the support of their home crowd behind them. The Warriors jumped out to an early 8-0 lead and finished the first quarter up 14-7 over La Joya.

The Coyotes stormed back to outscore the Warriors 47-27 over the final three quarters by playing lockdown defense and moving the ball around to the open shooter on offense. La Joya senior post Romel Villarreal said they’ve faced deficits before but this year’s squad has the ability to fight back in tough games.

“We’ve been in that situation before, especially since last year, always coming back but not always having enough gas in the tank to come back but this year we seem to have a lot more, we added fire to that gas.”

La Joya attacked the Warriors inside with big games from their two starting senior posts. Villarreal finished the game with 16 points while Julio Gonzalez poured in 14 of his own, including six in the final quarter to give the Coyotes a comfortable lead.

After the game, Gonzalez said he was a little nervous approaching the game between district championship contenders but was able to overcome that with a solid performance.

“I was a little bit nervous but I had to put that down,” Gonzalez said. “From this win, we expect to go higher and we just want to go as high as we can.”
Montalvo said he told his team all week this was one of their biggest tests of the season and liked the way his team responded to the words of the coaching staff.

“I told them from the very beginning that it’s a big game,” Montalvo said. “I told my coaches that we have to talk about it and if they weren’t going to be ready for something like this then not to expect to make the playoffs, so we talked about it throughout the week and they came out and responded.”

The Coyotes will carry their eight-game winning streak into the final game of the first go-round of District 30-6A action. If the team keeps up their play, they could very well bring home the district title to La Joya High School for the first time since 2005.

Next up for the Coyotes is a rivalry game with the Palmview Lobos (3-2) tonight as they visit Palmview High School for a scheduled 7:30 tipoff.
Villarreal said the team is taking it one game at a time and looking take advantage of every opportunity lying ahead.
“We just keep taking it one game at a time,” Villarreal said. “We don’t let one game get to us because we know every game matters, every game counts and we have to take advantage of them.”