If there is one thing Mission Mayor Norberto “Beto” Salinas wants Mission residents to know most of all is construction of the $20 million Mission Event Center will not increase area property taxes.

“We’re not going to spend money where we can’t justify it and by the time we get through with the EDC project we’ll cut 50 percent off the cost,” Salinas told about 100 people who gathered for a ground breaking ceremony Wednesday for the approximately 40,000-square foot building to be located on the east side of Shary Road about a third of a mile north of Expressway 83. Salinas was referring to the retail taxes that will be generated once the city’s Economic Development Corporation develops the 19 acres it purchased adjacent to the Event Center, which will be located between the H-E-B store and La Fogota Restaurant. 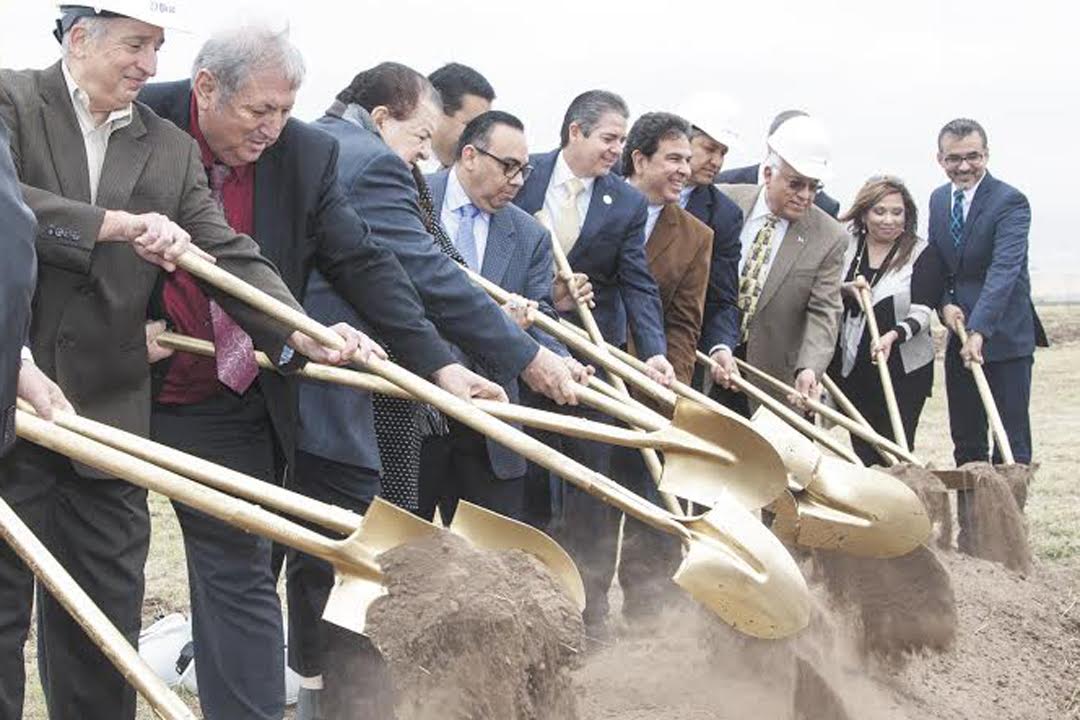 Donning a wool scarf around his neck on a chilly Wednesday morning Mayor Norberto&nbsp; “Beto” Salinas led from the center during a ground breaking for the $20 million Mission Event Center that will be located on the east side of Shary Road about one-third of a mile north of Expressway 83 in Mission.&nbsp; Progress Times photo by Joe Hinton

In May 2016 the city council authorized up to $25 million in bonds (certificates of obligation) to pay for 10 acres and construction of the building but the cost was reduced when a planned auditorium was removed from the plan after being deemed unnecessary.

City Manager Martin Garza said the EDC property will be the third prong of planned development on an overall 35-acre site. Garza said 19 acres purchased by the EDC&nbsp; will be divided into nine pads available for hotels, retail stores and restaurants.&nbsp; He said the event center will be the anchor that attracts businesses to the site. A 75,000-gallon water tower will also be built to supply the area, Garza said. If all goes as planned the center will be completed in 385 days, he said.

“We’re always looking for something to give back to the taxpayer and in October we’ll do that simply because [people are] spending more money,” Salinas said. “This is going to be a great project and I hope that everybody enjoys it.”

With an average of 120,000 vehicles a day Mission EDC President Alex Meade said the development is being located near the busiest intersection in Hidalgo County, Shary Road and Expressway 83.

“So the growth is a testament not only to the effort the City of Mission has placed into the area but also just a natural growth that’s been drawing from McAllen and west Hidalgo County,” said Meade. “So in 385 days we’re excited to see this thing open and see what else is going to come to this area.”

During the ceremony Architect Ramiro O. Zapata described some of the center’s features.

The building will face southwest on its Shary Road lot with a prominent lobby entrance featuring a 25-foot high ceiling. The lobby will comprise approximately 10,000 square feet traversing the length of the building from the west to east sides, said Zapata.

“That lobby can actually be an activity space of its own,” he said.

The main ballroom will have approximately 20-foot high ceilings with approximately 18,000 square feet of floor space. Besides events like wedding receptions and quincenearas the room can be divided into seven different conference areas. A full service kitchen is also on site.

There will be 15,000 square feet of patio space along the center’s south, east and west sides. Also on the building’s east side will be a walking track open to the public.

The center will also be equipped with state-of-the-art electronics compatible with audio, video and computer connectivity, he said.

“With the lobby, the ballroom and with all the patios we wanted to have a variety of different types of spaces that had different kinds of feels; a lot of natural light so the community is going to have a lot of opportunity to develop activities for each of those spaces,” Zapata said. “So I feel good about the way this helps us come together. It has been a group effort. Everybody has shared their vision and I feel like we captured the majority of what everybody needed to see for the citizens of Mission.”