In a competitive nine-team district like 31-5A, getting off to a good start is just as important as finishing strong.

The Veterans Memorial Lady Patriots soccer team, led by head coach Mike Espinoza, is off and running with a 3-0 start in district play and is looking to build on the momentum created early on in the season. 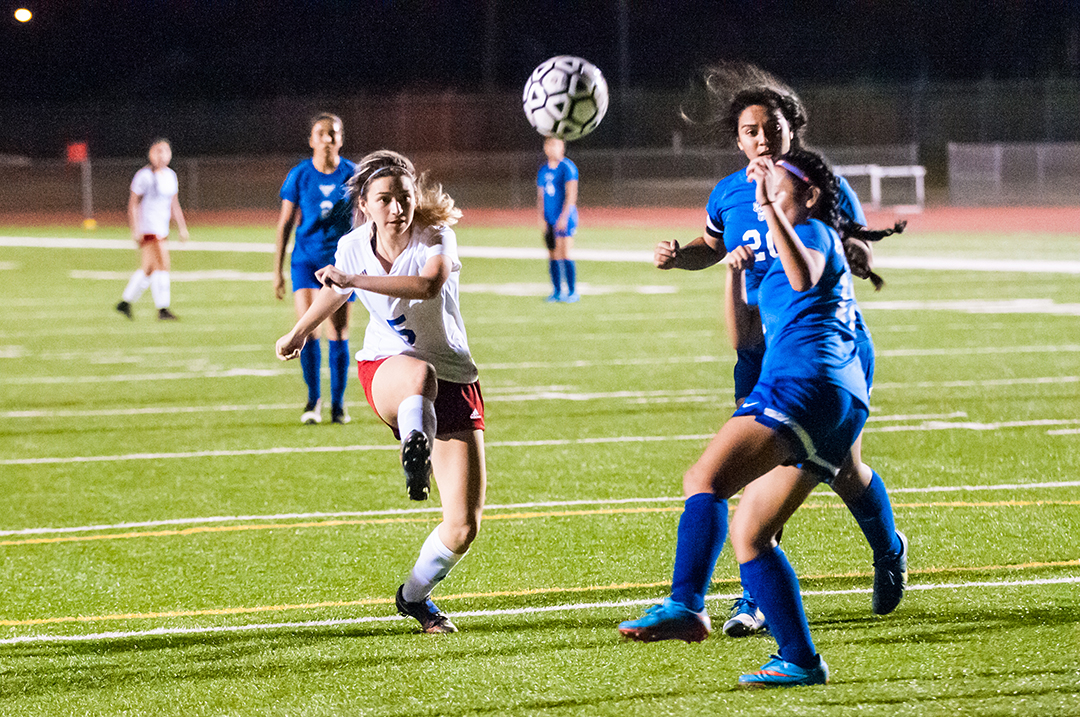 Veterans Memorial sophomore Heaven Deander takes a shot at the goal during the second half of the Lady Patriots’ 1-0, District 31-5A win over Laredo Cigarroa Tuesday night. Progress Times photo by Luciano Guerra

“I like the way the girls are coming along,” Espinoza said. “We’re starting 3-0 so that’s a big plus in our district. We’ll just see if we can stay on a positive note throughout the season.”

The Lady Patriots have their sights set on making the playoffs again this year after qualifying as the fourth seed in District 31-5A last season.

In their first year in the new look 31-5A that includes four Laredo schools and the dominant Sharyland and Pioneer girls soccer programs, the Lady Patriots currently sit at the top of the standings after picking up wins over Laredo Martin, Roma, and a 1-0 shutout victory over Laredo Cigarroa Tuesday night at Mission Veterans Memorial High School.

“Last year’s team was pretty strong,” Espinoza said. “We had quite a bit of girls that left but the girls that are stepping up this year are looking good so our season looks promising. They’re coming along and they’re being aggressive so this game I put out a more offensive lineup because I’m seeing what the girls are capable of doing.”

31-5A members weren’t afforded as many non-district opportunities to prepare for the grind of district play because of the nine-team alignment. The Lady Patriots non-district schedule included a scrimmage against Nikki Rowe, taking part in the Laredo Tournament and a match against Palmview.

With the Lady Patriots sitting at 3-0 so far in district, they have put themselves in position to have a big year in 31-5A. Senior defender Denisse Martinez, who plays a big role in the Lady Patriots’ defensive scheme, said she knows finishing as one of the top four teams in the new nine-team district poses a challenge that she finds motivating.

“I definitely want to see us making playoffs, I definitely see it happening,” Martinez said. “There are good teams in our district and I feel like that’s our motivation and that should keep us motivated to make the playoffs.”Espinoza has his squad believing they can claim one of the four playoff spots in District 31-5A.

“There’s four teams that advance and we’re hoping to get one of those spots,” he said.

Senior midfielder Maria Contreras, who creates plenty of scoring opportunities for her team with her passing ability and ball control, said she knows this team has the potential not only make the playoffs, but to advance into the third round.

“I want to see us make it to playoffs, at least to the third round, because we have that potential as a team,” Contreras said. “I’m looking forward to making more opportunities for my teammates and hopefully we’ll get it going.”

While it is early in District 31-5A, the Lady Patriots know they have a long season ahead of them. Martinez said the team could go a long way if the team keeps a positive mindset.

“I think we can go a long way as long as we keep up the good work and we don’t mess up,” Martinez said. “It’s us who bring ourselves down and we need to keep a positive mind and keep going and striving to district.”

The Lady Patriots are back on the pitch tonight as they pay the Pioneer Lady Diamondbacks a visit at 7 p.m. in a matchup between two teams fighting for the top spot in District 31-5A.