As of press time Thursday and with the National Weather Service predicting a 50 percent chance of rain Saturday, Texas Citrus Fiesta officials say the 80th Annual Parade of Oranges will go on tomorrow no matter the weather.

“Rain or shine we’ll go with the flow,” said TCF President Bill Filut, adding nearly 200 entries have signed on for the parade that starts at 3 p.m. and runs down Conway Avenue from Griffin Parkway to 4th Street. 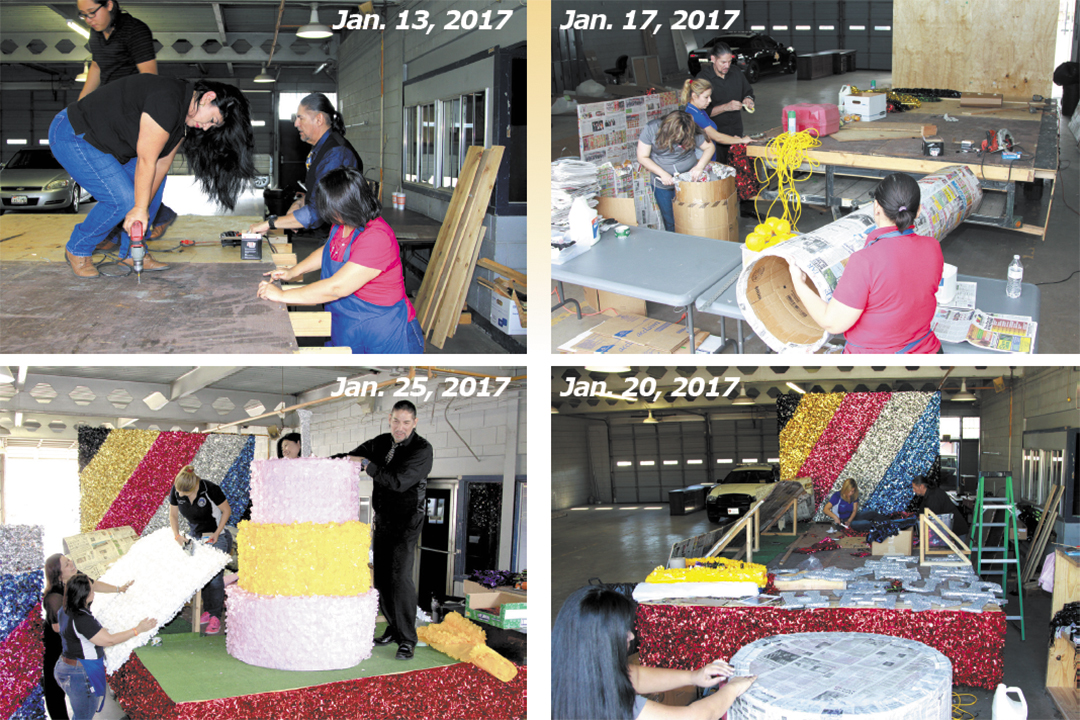 Parade Chairwoman Joyce Hildebrand said approximately 60 of the entries are floats. Other entrants include politicians, visiting dignitaries and businesses, she said. Also 10 marching bands have entered from area junior and high schools.

Hildebrand said the bands are perhaps the entrants who might be most adversely affected from rain.

“We may not have as many bands because instruments don’t work well in the rain,” she said when asked to speculate the worst that could happen if it rained on the parade.

Among the other floats will be Mission’s Speer Memorial Library’s entry featuring this year’s theme, celebrating the 80th anniversary with music, said Children’s Librarian Lisa Rivera.

Since Jan. 9 a core group of library staffers and a few who made one-time appearances worked weekdays assembling the float sponsored with a $500 donation from Friends of the Library. On Monday staffers had differing opinions as to whether the float would be completed on time or sooner.

“It will be done Friday,” said Mary Rios, the library’s technical services supervisor.

It will be the seventh year the library has entered a float taking first place in it’s category twice, Rivera said. In 2014 the library’s float took first place with a Mardi Gras theme and last year it took third place with a DC Comics-themed float featuring Batman and the Joker in Gotham City. Rivera said selecting music from the 1940s to today has been left up to Christian Bolaños, a City of Mission computer technician, to accompany this year’s float which was built on a trailer provided by the city’s maintenance department. The float features a large anniversary cake and party horns.

Rivera said the project has been a good bonding experience for coworkers.

“Oh definitely. We usually start in the morning. We start laughing, we put on some music, we’re always joking but we work at the same time,” she said. “We enjoy ourselves.”

That joking took the form of some good-natured ribbing when staffers were asked on day 10 of construction what had been their biggest challenge so far.

“Working with women,” said Library Coordinator Robert L. Rivera, who most days was the only man on the project.

“We try to get in everyone’s little idea but sometimes we clash,” Lisa Rivera said.

For Vanessa Flores the experience helping build the float has been “awesome,” she said.

Neither Rivera, who are not related, will ride the float being busy with other responsibilities. Lisa Rivera is a TCF board member. Nor will Rios who said she plans to enjoy watching from the sidelines. But staff member Anna Gomez said she is looking forward to being on it. She will be joined by staff member,

Blanca Martinez, and others. Gomez said she is looking forward to waving to the crowds and dancing to the music.

“I worked for it, to be honest with you. That’s the way we see it,” said Gomez. “We work for it to be on the float. So that’s the reward because we’re proud of what we accomplished.”