Though the original contract called for work on the connection of Inspiration Road under Expressway 83 in Mission to have been completed this week, the project’s manager said it could be April before the work is done. Meanwhile another project is just getting under way in McAllen that will cause traffic delays on the expressway east of Mission.

That’s what Jesus Noriega, an engineer with the Texas Department of Transportation, reported Jan. 24 to the board of directors of the Mission Redevelopment Authority. Noriega briefed the MRA board one day after the originally contracted completion date for the Inspiration Road expansion had passed, he said. 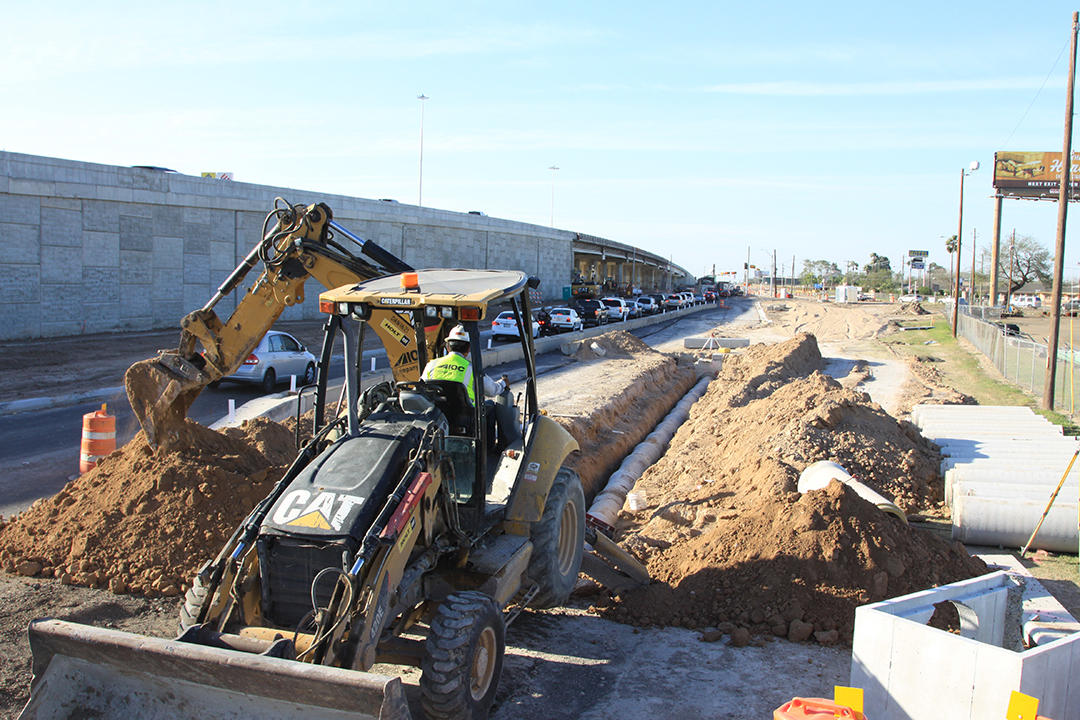 Westbound traffic on the U.S. 83 frontage road backs up during P.M. rush hour Tuesday at Inspiration Road where construction is underway to connect the north and south portions of the road. The project’s TxDOT engineer said Tuesday the project wouldn’t be completed until April. Progress Times photo by Joe Hinton

The approximately $46 million project is being constructed by J.D. Abrams L.P., a Houston based civil engineering and construction company.

Noriega reported the bridge that carries Expressway 83 traffic over East Business 83 at Inspiration Road was completed on Dec. 12. He said paving the bridge, the effected areas of frontage road and the extended portions of Inspiration Road were all that remained to complete the project.

Conceived in 2011, the Inspiration Road expansion required the expressway bridge lengthened to accommodate both Business 83 and Inspiration Road, the latter road previously terminated at the north and south sides of the expressway.  Inspiration Road is expected to become the main route north from Mexico for commercial vehicles once the Madera Bridge – still in the planning stages – is Completed, creating a second international bridge with Mexico in Mission.

The expressway bridge was also widened from three to six lanes, Noriega said. Noriega attributed the completion delay to rain days and other items that had been added to the project.

“But we’re coming around the corner and we’re getting there,” Noriega said.

In response to a query from the board’s vice chairman, Charles Zey, regarding another area TxDOT project, Noriega said workers are preparing to divert
Westbound traffic on Exp. 83 to the eastbound lanes at Bicentennial Road in order to facilitate demolition of the bridge that carries Bicentennial Road traffic over the expressway. TxDOT is planning to eliminate the Bicentennial overpass permanently by building an underpass at the expressway.

Noriega referred further Progress Times questions regarding the Bicentennial Road project to TxDOT spokesman, Octavio Saenz, who said Wed. work began on Jan. 3 with plans to widen Bicentennial from two lanes to three while improving pedestrian sidewalks. Bicentennial Road is the main thoroughfare to McAllen Miller International Airport and is one of the busiest streets in Hidalgo County, said Saenz.

Saenz said the project also includes increasing the overpass height at 10th  and 23rd Streets in McAllen. He said expressway traffic will be disrupted for about two miles between Ware and McColl Roads in McAllen where westbound traffic will share two of the four eastbound lanes during most of the 37-month project.

“There’s no way of sugar coating it that it’s going to be congested and the reason why is because it’s a big project and there’s a lot of traffic there,” Saenz said.

In the words of one MRA board member Tuesday, “It’s going to be a parking lot.”