District 30-6A soccer is underway and the student-athletes are ready to leave it all on the field for a shot at the playoffs.

Mission and La Joya high kicked off the action Tuesday night with a double-header between each school’s boys’ and girls’ soccer teams. 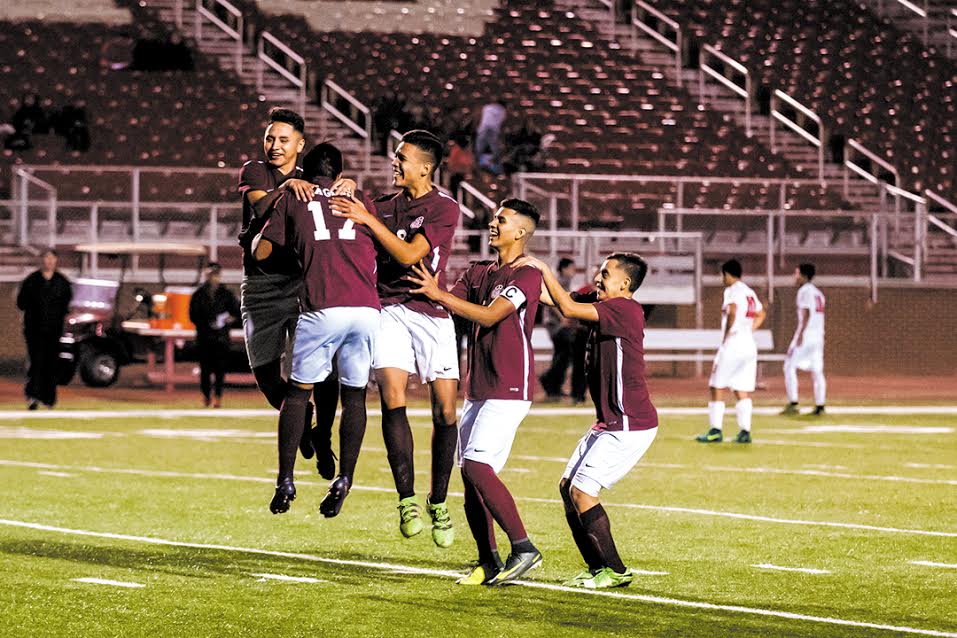 Due to renovations at Tom Landry Stadium, neither of Mission’s soccer programs will host a home game, forcing them to assume the role of road warriors this year. Mission boys’ soccer Head Coach Christos Barouhas said he sees having to play every district game on the road as a blessing in disguise.

Play between the Eagles and the Coyotes began at 6 p.m. at La Joya High School, with each team looking to get off to a strong start in District 30-6A play.

The Coyotes struck first when Jordan Montes struck a ball under the Mission goalkeeper in the 15th minute to put La Joya up early. In the second half, Mission mounted a comeback and put the pressure on the Coyote defense. Mission’s Nicholas Diaz put the Eagles on the board with 22 minutes remaining in the match thanks to John Cortez, who drew the goalie out of position leaving an empty net for Diaz.

Tied 1-1 after 80 minutes of play, the match went to penalty kicks to decide a winner. Mission capitalized on the opportunity by scoring on their first four kicks while La Joya only converted one-of-four penalties.

The Mission Eagles improve to 1-0 in district play while the Coyotes drop to 0-1.

Diaz, who spearheads the Eagles attack from his forward position by creating opportunities for himself and his teammates, said he wanted to have home games this year but still has his mind on winning district.

“That’s sad for us because we wanted to play in our stadium and beat teams at home,” Diaz said. “Our mentality is to win district.”

Barouhas said this team is focused on their goal of winning a district championship.

“Win district,” he said. “Coming into this game, we came with a record of 14 wins, five losses and three ties so I thought we were ready. We played against very good teams, so I think we’re ready even though the (district) competition is very good. It’s going to be a dogfight every time.”

The Coyotes attack is led by Jonathan Gutierrez, whose speed and ball control, helps his team put pressure on their opponents. La Joya’s boys soccer Head Coach Alejandro Davila said his team needs to pick up their play to get back on their winning track.

“We need to pick it up and continue doing what we were doing prior to this game,” Davila said. “The intensity is the main thing, mentally and physically we feel OK. We started off on the wrong foot, we could have done better tonight but it is our goal to win district. We still got 11 games to go and we just need to pick it up and set the tone come Friday.”

The Lady Eagles and the Lady Coyotes took the field once the first game was wrapped up in search of their first district win. 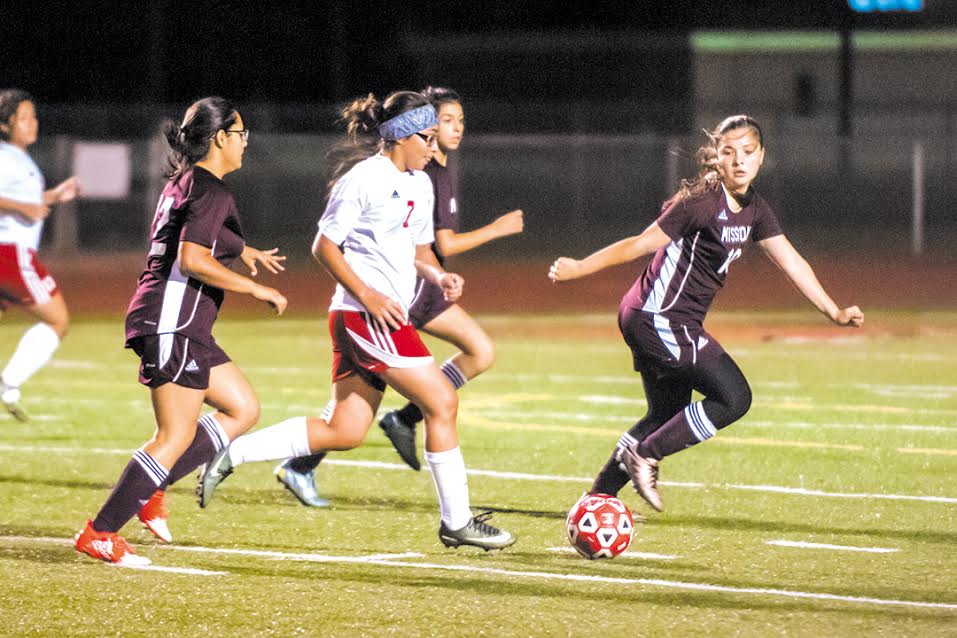 The Lady Coyotes’ Keyla Ochoa dribbles down the field as a trio of Lady Eagles look for an opening to steal the ball during the first half of Mission’s 1-0 win over La Joya. Progress Times photo by Luciano Guerra

Mission’s Cynthia Gutierrez found Iveth “Shorty” Guzman in the 11th minute of the match to put the Lady Eagles up early. The Lady Coyotes and striker Keyla Ochoa ramped up their attack in the second half but couldn’t find the back of the net, giving Mission the 1-0 win.

Mission Lady Eagles Head Coach J.R. Gill’s team is made up of two seniors while the rest are underclassmen. In a tough district, the team’s goal is to finish in the top three and qualify for the playoffs.

“Our goal is to be in the top three and hopefully make the playoffs, that’s always the goal, that’s our mindset,” Gill said. “We are in a tough district, every team, including La Joya today, as you saw they jumped on us in the second there on our side so every team is going to be a really tough battle for us but the goal is to make the playoffs.”

Lady Coyotes Head Coach Lupe Moreno said his young team is coming together and needs to improve to make the playoffs.

“Being able to play more together, practice more together, communication plays a big role,” Moreno said. “I only have two seniors and they’re trying their best to communicate it to the younger ones. Our goal is to improve and make the playoffs.”

Up next, the La Joya High’s boys and girls teams go on the road to take on the McHi Bulldogs. The boys’ match is set to begin at 6 p.m. with the girls’ match scheduled to start at 8 p.m.

The Mission High boys and girls soccer teams visit the McAllen Memorial Mustangs tonight for their second district game. The boys’ match is set to begin at 6 p.m. while the girls’ match is scheduled to begin at 8 p.m.