Two hours before the 80th annual Texas Citrus Fiesta’s Parade of Oranges scheduled 3 p.m. start, lifelong Mission resident Sandra Noyola, her three children and her boyfriend, had already set out camping chairs near the parade’s starting point at Conway Avenue and Griffin Parkway. The weather was breezy and cold. The skies were gray and seemed ready to deliver the forecasted rain. Fortunately, the rains never came.

Noyola’s boyfriend, who won’t be named at his request, and Noyola’s daughter were hidden under blankets and jackets while Noyola, 34, knitted in orange yarn a small vase. Knitting is her profession. She and her children, two of whom remained in the car keeping warm until the parade’s start, were carrying out a family tradition. 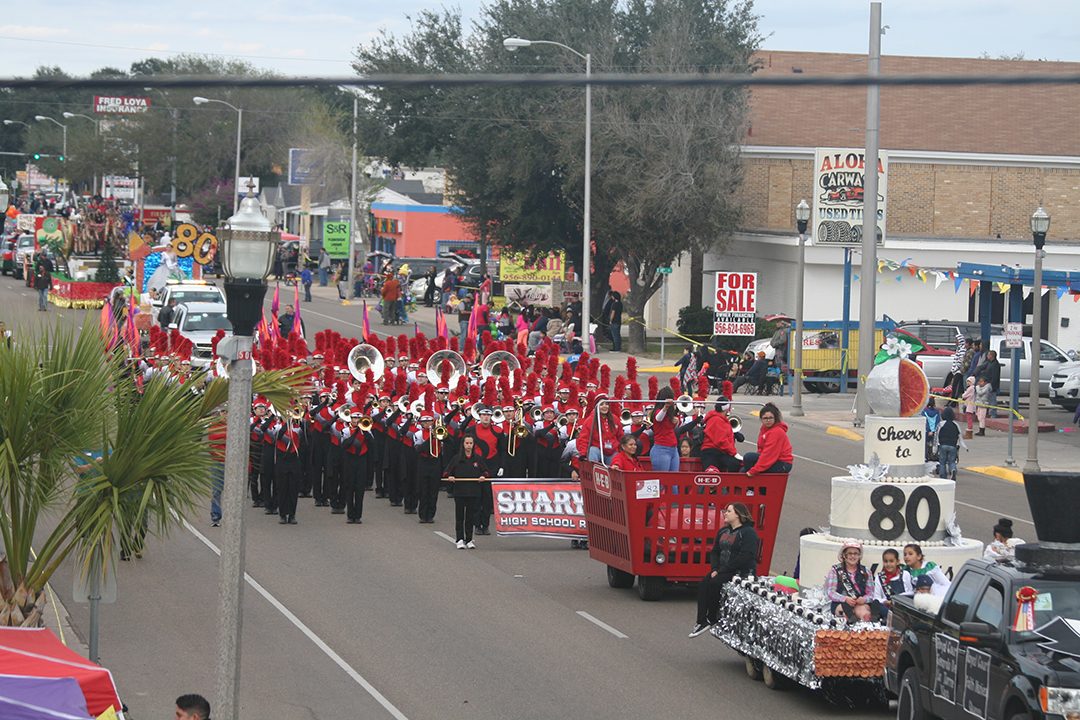 “I’ve come every year of my life,” said Noyola. Asked what’s her favorite part of the parade, she did not hesitate to answer.

“The children and the memories it brings back,” Noyola said. “Coming with my dad. Eating tuna casserole sandwiches. Mostly my parents and my dad since we lost him in March.”

A short distance away, also set up early was the family of Mission resident Eric Martinez. On Saturday his 3-year-old son, Eric Martinez Jr., sat in his mother’s lap blowing bubbles into the air from a toy his father bought him as the family waited along Conway Avenue more than two hours before the parade started. Martinez was accompanied by his wife, Priscilla, and her brother, Alex Cisneros.

“We come for the family experience,” said Martinez. “No matter rain, fifty degrees, sunny or cloudy, regardless.”

The parade is also a family affair for Mission resident, Brenda L. Sanchez, 27, who was setting up seats near the Martinez family and just as early. Sanchez was with her husband, Manuel Garcia, and her mother, Concepcion Sanchez.

“We got here early because we wanted to save a place to have a good view of the parade,” said the family matriarch.

Asked her favorite part of the parade Brenda Sanchez answered: “The floats. Seeing the king and the queen and seeing the different cultures, like from Mexico.”

Sanchez said coming to the parade was a family tradition the weather could not stop her from enjoying.

Saturday, nine members of Mission resident Maria Navarro’s family worked the parade together. Her son-in-law, Jose Vienueve, a citrus orchard worker, stoked a fire in a cut barrel grill on which he would soon be grilling chicken and fajitas for tacos the family would sell along the parade route. Her daughter, Danae Romero, manned a table display of traditional Mexican coconut, sunflower seed and wagon wheel candies her grandmother brought from Mexico for sale.

Navarro was one of approximately 30 vendors who received licenses to sell goods – from food to toys and jewelry – along the parade route, said Nancy Chapa, the Fiesta’s parliamentarian. Saturday morning Chapa, accompanied by volunteer Rick Silva, were walking the parade route securing the TCF’s official registration documents to vendor tables.

But not everyone grew up with the parade. Canadians Peter and Eugenia Komish, 73 and 70, respectively, from Manitoba, Canada, have been spending winters in south Texas for 16 years. The couple, currently staying at the Tropic Star RV Resort in Pharr, have attended the parade at least 10 years, they said.

Asked her favorite part of the parade Eugenia said, “All the girls. And I feel sorry for them because it’s so cold. And I like the floats, too, because it takes a lot of time and energy to put those up.”

Speaking of the cold weather, asked if she would be uncomfortable as she sat the length of the parade atop a 2017 Chevrolet Corvette convertible, Amanda Galvan, Duchess of Lantana, covered with a brown western canvas jacket over her ball gown, was not concerned.

“It’s a little chilly, but it’s OK,” she said, just prior to the parade’s start.

Edna M. Carlson, 72, of Eau Claire, Wis., put her tongue in her cheek when she answered, “I guess not,” when asked if she was worried about the cold weather. For Carlson and her husband, Harland H. Carlson, 73, a retired school band director, Saturday’s parade was also a family affair. The couple were elected king and queen of the Mission Bell Trade Winds RV Resort and would be riding atop the resort’s float that was constructed by about 30 resort residents, Mrs. Carlson said. The couple didn’t know it at the time but their float would win first place in the Winter Texan I competitive float category.

Mrs. Carlson said it was the seventh year she and Harland had helped construct a float.

“There’s about six of us who do all the dreaming and ideas then we get some very talented people to help us put it all together,” She said.

The Carlsons said the float was made with about 33 Valley-grown products used to create a western outdoor theme decorated with native animal life figures – like road runners and other birds – made from natural materials and some from paper mache.

“It takes a lot of work to do this and it looks really good that people can get together to do all this, especially for our enjoyment,” said Eugenia with a laugh.

“Oh yeah,” said her husband, Peter. “As long as our health holds out we’ll be here.”