The playoffs have arrived and every shot, rebound and dive on the floor in pursuit of a loose ball could be the last opportunity to lead a team to victory or suffer season-ending defeat.

The Palmview Lady Lobos punched their playoff ticket by finishing third in District 30-6A with an 8-4 record while going 20-15 on the season. In the team’s final regular season tune-up, Palmview dominated the Mission Lady Eagles, picking up a 65-18 win. 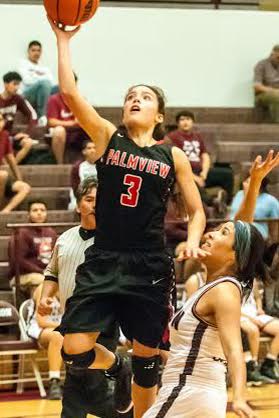 The Lady Lobos sped the game up by pressuring the opposing guards and pushing the ball on offense. Junior guard Brittany Cano poured in 19 points while sophomore guard Renee Flores posted 11 of her own off the bench.

“I think the defense was pretty good tonight,” Cano said. “That’s one of the most important things, to play that type of defense. If we can play like this in the playoffs I know we can do good.”

Cano, who has two years of postseason experience under her belt, said the team must remain composed when taking on teams from up north in the playoffs.

“I know they’re really good up there but I know we can do a lot better; win or go home,” she said. “We have to be tough about everything and if we are down we still have to keep our heads, we can’t let ourselves down.”

The Lady Lobos first round matchup is against Laredo United South and scheduled for Monday at 6 p.m. at Alice High School.

“The last two years we’ve been basically shut out in the first round, and again, there is tough competition in Laredo,” Reyes said. “We always have the hardest route but we need to go through that route and go through those growing pains.”

In District 31-5A, the Lady Patriots, facing a must win situation in the regular season finale, came out and made light work of the Valley View Lady Tigers with a 51-20 victory.

Veterans Memorial dropped their first matchup with Rio on the road in a 36-37 thriller. The Lady Patriots avenged their loss when they welcomed the Lady Rattlers onto their home court, this time coming away with a dominant 53-32 win.

Head Coach Rafael Cantu Jr. feels his team is peaking at the right time, as the Lady Patriots get ready for their play-in game.

“I feel we’re playing our best basketball of the year and that’s when you want to be playing your best ball,” Cantu said. “The girls are really coming together. Their confidence is building and they’re playing with a purpose. The challenge is can we pick it up even more, can we take it to the next level?”

The play-in game between Veterans Memorial and Rio Grande City will be played tonight at La Joya High School at 7 p.m. for a shot at the playoffs.

The Lady Coyotes earned themselves a shot at the postseason in the form of a play-in game against Nikki Rowe. La Joya, facing a must win situation and needing Rowe to lose to McAllen High on the final night of the regular season, took down Juarez-Lincoln by a score of 48-33. The Lady Coyotes got their help when McHi beat Rowe 72-52, setting up a third matchup between La Joya and Rowe for the right to go to the big dance.

In the first meeting between the Lady Coyotes and Lady Warriors, Rowe came out on top with a 51-43 win. When the teams met on Jan. 17 for the second time, La Joya prevailed with a 37-30 win to even the season series.

The Lady Coyotes play-in game against Nikki Rowe is set for tonight at 6 p.m.