A visit from a United States senator and a pay raise for the Mission CISD Superintendent were among the stories that dominated the week.

Below is a sample of all our front-page stories for our next issue. Be sure to pick up a copy of it tomorrow once it hits newsstands. 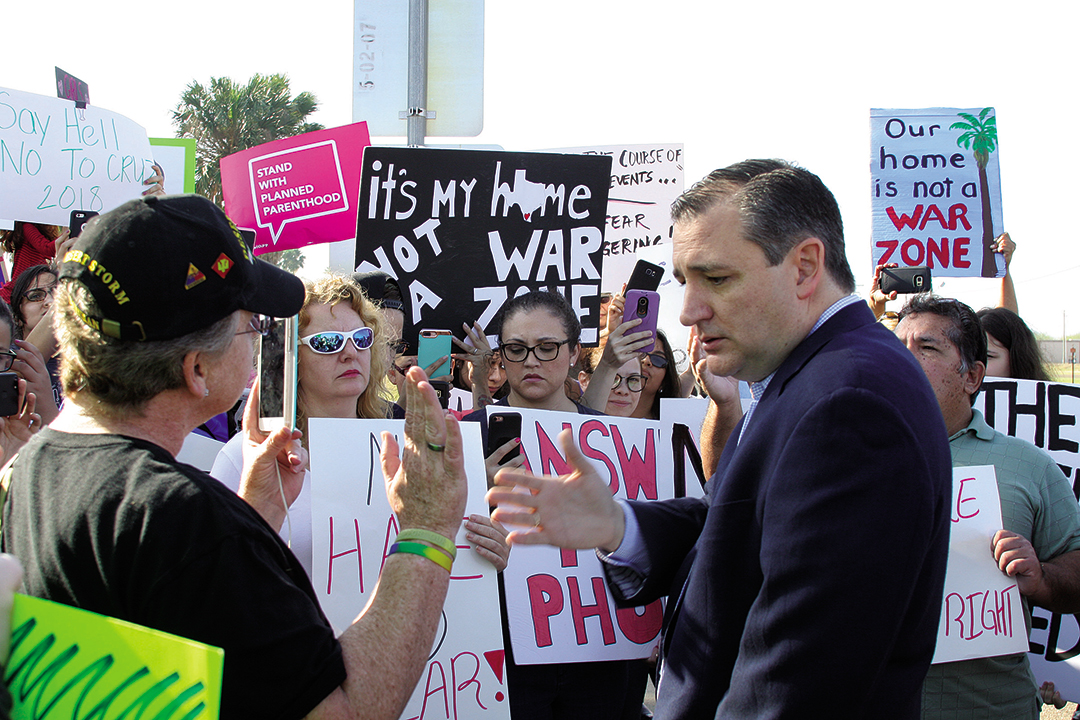 During his visit to Mission last Saturday, Texas Senator Ted Cruz took the time to walk across the street to talk to a group of about 40 protestors to hear their concerns. However, the rowdy group would not allow the senator to answer their questions, as they kept interrupting him in mid-sentence. Harlingen immigration attorney Jodi M. Goodwin, in the white sunglasses, was the most vocal of the group.
Progress Times photo by Joe Hinton

While about 40 protestors chanted, “No border wall,” outside Mission’s Center for Education and Economic Development, inside Republican U.S. Sen. Ted Cruz was discussing border security with more than a dozen area officials, some of whom came away from the meeting feeling a border wall is a forgone conclusion.

And Cruz told the officials he expects “significant reforms” to the nation’s tax and regulatory systems within the year that could return economic growth to historic levels.

“It’s going to happen,” Rio Grande City Mayor Joel Villarreal said of President Trump’s call for a wall along the entire U.S. border with Mexico. “But we might as well have some input into it and that’s where we’re coming from.”

Villarreal was one of 17 Rio Grande Valley mayors, city and county officials who met with Cruz Saturday morning to discuss border security and economic development.

The Mission Consolidated Independent School District board of trustees has given their popular superintendent, Dr. Ricardo Lopez, a $15,000 pay raise and a two-year extension on his contract.

“He’s tied here for five years,” said board of trustees president, Patricia Y. O’Caña-Olivarez, following the vote and referring to the fact Lopez still had three years remaining on his current contract.

On Jan. 17 the board unanimously elected their president and fellow board member, Frances Salinas De Leon, to serve as interim executive director. De Leon, no relation to the reporter, had to step down from the board to accept the position.

The sounds of racing cars and the sight of makeshift crosses strewing the street side marking the location of fatal accidents wasn’t enough to motivate Herman Garza to take action. And it wasn’t even the day after Christmas when the driver of a van lost control and overturned his vehicle on Garza’s driveway, damaging his fence and gate and destroying a street light. What finally motivated Garza was a day not too long ago when a driver speeding north from Expressway 83 on Bentsen Palm Drive couldn’t stop for the school bus in front of him and instead veered to the road’s shoulder, nearly striking a child about to get on the bus.

“And our neighbor pulled her out of the way and the car just passed by. And they didn’t even stop for the bus,” said Garza. “So those are things we see daily, you know? But all my neighbors, they all have stories of somebody dying, of somebody ran over there and things like this.”