Four more wins. That is all it’ll take for any of the 16 local wrestlers competing at the State UIL Wrestling Tournament this weekend to strike gold. Not an easy task, though. Winning four in a row against the best wrestlers from across the Lone Star State is as daunting a task as there is in the sport.

Whether any of the Big 7 schools’ wrestlers that finished among the top four in their respective weight classes at last weekend’s Region IV 5A and 6A tournaments to qualify for the state tournament bring home the gold this weekend remains to be seen. Even if they don’t, chances are that one or more of them will return to the Valley with a medal of some kind hung around their neck. Four Big 7 wrestlers earned state medals last year and two medaled at state the year before. 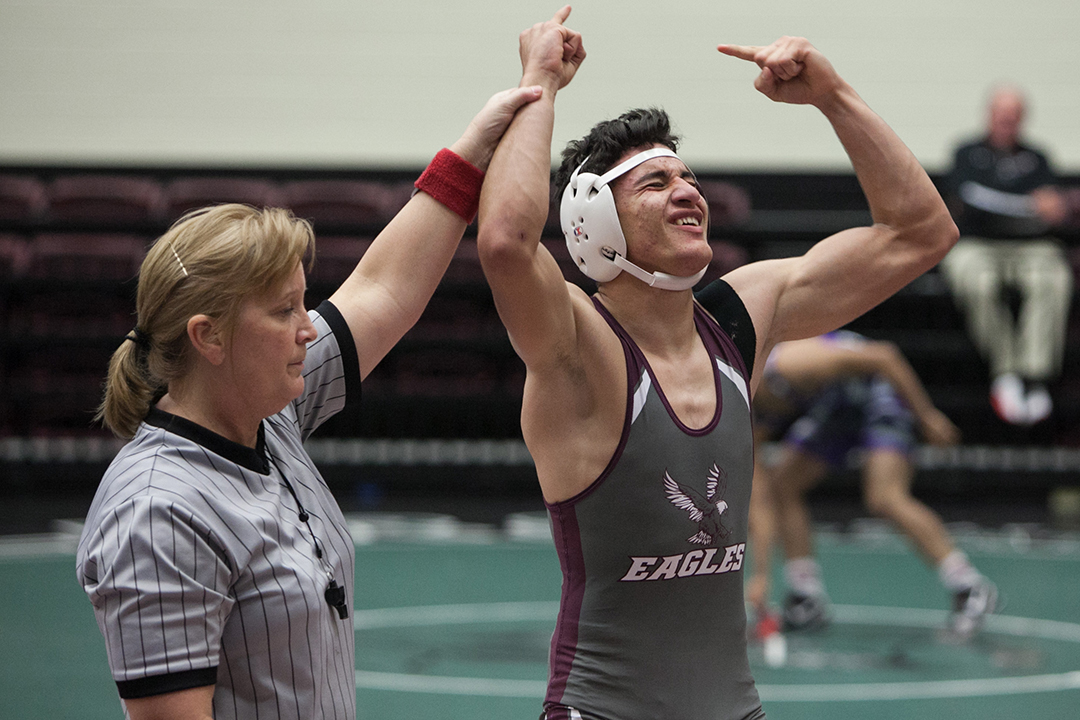 Guadalupe Rodriguez of Mission High celebrates his victory over Robert Hall of Killeen Shoemaker in the 138 pound class of the UIL 6A Region 4 Tournament in San Antonio on February 18, 2017. Progress Times Photo by Paul Brick

As the only 6A boy wrestler in the Valley to earn a regional championship last week, Mission High senior Guadalupe “Lupe” Rodriguez (46-2, 138 lbs.) has his sights set on a gold medal in this his first trip to the state tournament.

“I definitely want to finish in the top four at state but all I have on my mind right now is the gold medal,” Rodriguez said. “I’d be on top of the world if I could do that. And as I told my coach, I’ll want a banner with my picture on it hung in the gym if I do win the state championship.”

While his banner request may have been said tongue-in-cheek, Rodriguez has been serious about his wrestling ever since his sophomore year.

“I would have to say that my breaking point was my sophomore year,” Rodriguez said. “That was when I saw that I could actually become something in wrestling because I had 28 wins that year after having only one win my freshman year. That really lit a fire under me and motivated me to become a better wrestler.”

Rodriguez took the regional championship just one year after his sixth place finish at the same tournament last year. Mission High’s assistant wrestling coach, David Mann, believes that he can pinpoint the exact moment that Rodriguez committed himself to qualifying for state this year.

“Even though he placed sixth last year, we had a girl and another boy going to the state tournament so we took Lupe too,” Mann said. “When he stepped into the Berry Center, his eyes got as big as lollipops and he decided right then and there that this was where he wanted to be. From that moment on, that’s all he dreamed about and all he worked for. That was his turning point.”

Rodriguez, who was named Outstanding Male Wrestler at the regional tournament, is not the only Eagles’ wrestler to qualify for state. Fellow Mission senior Manuel Vega was the regional runner-up in the 160 lb. weight class.

The state tournament is taking place today and tomorrow at the Cypress-Fairbank ISD’s Berry Center.