PALMVIEW —The sounds of racing cars and the sight of makeshift crosses strewing the street side marking the location of fatal accidents wasn’t enough to motivate Herman Garza to take action. And it wasn’t even the day after Christmas when the driver of a van lost control and overturned his vehicle on Garza’s driveway, damaging his fence and gate and destroying a street light.

What finally motivated Garza was a day not too long ago when a driver speeding north from Expressway 83 on Bentsen Palm Drive couldn’t stop for the school bus in front of him and instead veered to the road’s shoulder, nearly striking a child about to get on the bus.

“And our neighbor pulled her out of the way and the car just passed by. And they didn’t even stop for the bus,” said Garza. “So those are things we see daily, you know? But all my neighbors, they all have stories of somebody dying, of somebody ran over there and things like this.” 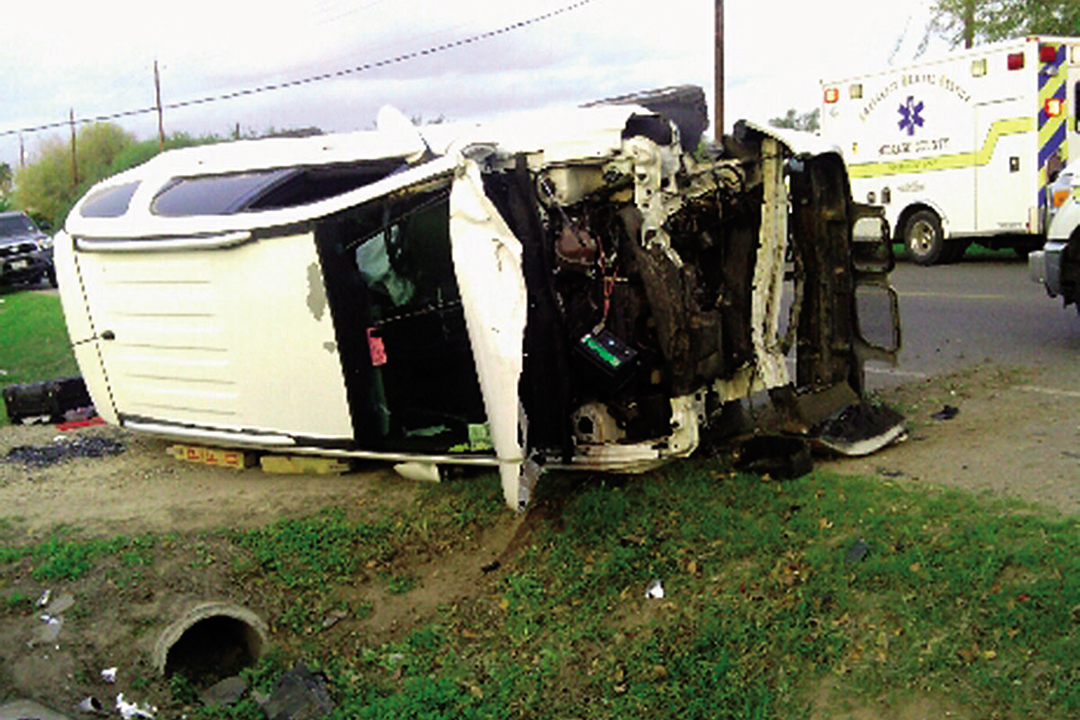 A single vehicle roll over that occurred Dec. 26 in the 1200 block of N. Bentsen Palm Drive damaged the front gate and fence of the home of Palmview resident Herman Garza that also destroyed a streetlight.
Courtesy photo

“I know the constable stopped someone right in front of my gate because he was going 80 miles an hour there,” said Garza’s neighbor, Angel, who did not want his full name used. Angel said it is not uncommon for younger area drivers to use Bentsen Palm Drive Road as a drag strip to race north from Expressway 83 toward Two Mile Line.

The two men were among about eight residents who live off Bentsen Palm Drive between the expressway and Two Mile Line who appeared before Palmview’s City Commission to plead their case for lowering the speed limit on the two-lane stretch of roadway that transitions from commercial to residential zoning from south to north.

Garza, 68, a retired pastor who has lived in the same house off Bentsen Palm Drive for 46 years, said he and neighbors had been discussing the idea for about a year but the recent near miss was the last straw.

“I recently talked to the assistant city manager and he said, ‘Come on in and present it to the council,’” said Garza, referring to Assistant City Manager David Nancianceno, who had the matter placed on the commission’s Feb. 21 agenda.

The six-member commission, which includes Mayor Gerado Perez, voted unanimously with no discussion on the matter to change the speed limit on the stretch of road from 45 mph to 30 mph.

In other business the commission voted to cancel its monthly contract with the Mission-based company that provides trash pickup service for the city.

City manager Ramon Segovia said the city was not ending its contract with     Allied Waste Services but was seeking to enter into a longer-term contract with a set rate. Segovia said this will allow the city to lock in its current garbage collection rate of approximately $56,000 a month while a consultant hired by the city, Rudy Garza, completes a feasibility study for the city to create its own sanitation department. Segovia pointed to other area cities such as Alton and Mission that have saved money by purchasing their own sanitation trucks and running their own sanitation services. He said based on the consultant’s preliminary findings the city stands to save up to a quarter-million dollars in its first year of operation.

“And that’s counting the investment of the purchase of the vehicles and equipment that’s needed,” Segovia said, adding the consultant needs more time to complete his work.

The commission voted to terminate the current contract and request a flat fee for sanitation services for a several month period to be determined in negotiations.

Also Tuesday, among other actions, the commission has scheduled a public hearing for residents to bring their concerns to the commission. The hearing is scheduled for Feb. 27 beginning at 6 p.m. in the city’s multi-purpose center behind City Hall which is located at 400 W. Veteran’s Boulevard.

The city also plans to begin offering night court hours at city hall beginning either Feb. 27 or March 6. The operating hours will be from 5 p.m. to 7 p.m., Segovia said.