As McAllen and Hidalgo County Officials say they still aren’t sure how McAllen’s first and only suspected Zika victim became infected, the City of Mission begins measures to control mosquito populations in the city.

Meanwhile the Center for Disease Control plans to conduct a longitudinal study on all pregnant women in the county testing positive for the virus. 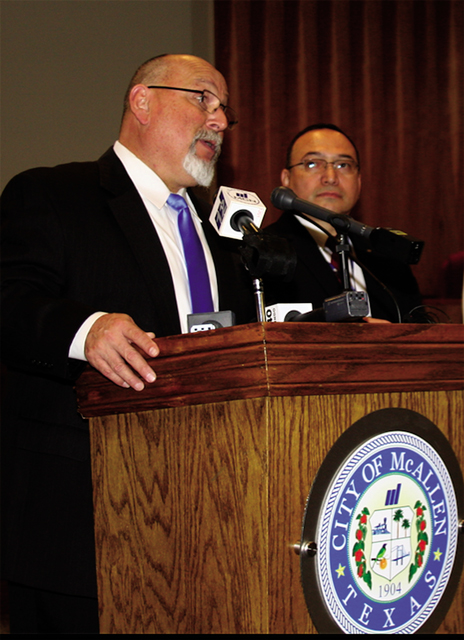 On Tuesday Hidalgo County Health and Human Services Chief Administrator Eddie Olivarez said it’s still unknown how McAllen’s first suspected Zika victim became infected having not traveled outside the county and with no Zika-carrying mosquitoes having been caught in area traps. Zika can also be transmitted during sex, he said.

Olivarez and McAllen Mayor Jim Darling announced in a Feb. 24 press conference that a private laboratory had confirmed the disease infected a McAllen resident. But on Tuesday Olivarez said a state lab’s test was “inconclusive” as to a Zika infection.

Due to federal medical privacy statutes the officials declined to provide any details about the patient who Olivarez referred to Tuesday as “Patient Zero.” Olivarez said the patient has recovered from the disease, the symptoms of which are a body rash, low-grade fever, body aches and conjunctivitis. Though only one in five persons infected with the disease experience symptoms, Olivarez advised anyone who experiences at least two of the symptoms to be tested for Zika. And he said all pregnant women in their first and second trimester should be tested.

Olivarez said while Zika has caused the brain defect, microcephaly, in five percent or fewer of pregnant women infected with the virus, recent studies in Brazil indicate the virus may impact children who appear to be born normally but who  suffer developmental disabilities in their first year after birth. He said the Center for Disease Control has provided funding to Hidalgo County and the cities of Laredo and Brownsville each to hire a birth defect specialist to follow Zika-infected women through their pregnancy and first year of birth. He said the specialist should be on staff in the county’s health department within the next couple weeks.

Patient Zero was the first person suspected of being infected with Zika in neighboring McAllen and the seventh in Hidalgo County since 2016. No cases were reported in the county in 2015, per www.TexasZika.org.

Olivarez said the virus is carried by two species of mosquitoes that live predominantly in tropical and sub-tropical climates, are most active during daylight hours and are most active in the months of March and April.

Josh Ramirez, McAllen’s director of Health and Human Services, said the city was sprayed with insecticides over the weekend and that traps were set up to capture mosquitoes. But he said the number of the species of Zika-carrying mosquitoes captured were not sufficient in number to submit to the Centers for Disease Control and Prevention for testing.

“The traps did not provide sufficient numbers of Zika carrying mosquitoes to draw a blood sample from,” he said, adding the low numbers are not indicative “of a potential threat for us.”

Olivarez said the Zika-carrying species of mosquito rarely travels more than 400 yards in its lifespan. He said it’s important for citizens to take measures to protect themselves by wearing DEET repellant and by helping to eradicate mosquitoes by eliminating areas of standing water and other mosquito habitats like tall grass.

“If people take care of their own yards and nearby areas they will go a long way toward protecting themselves,” Olivarez said.

Barring high winds or rain Mission City Manager Martin Garza said city crews were expected to spray insecticide throughout the city. On Wednesday he said high winds had prevented the Feb. 28 start of the program. He said the crews had been scheduled to complete their work by March 6 but according to state law no mosquito spraying can occur if winds are higher than 10 mph.

“And if it rains we’re not going to spray because it just doesn’t do much, to be honest with you,” Garza said.

Garza said the initial spraying would occur in public areas such as near schools and parks where children are outside playing.

“And so we concentrate on those areas where the public is mostly around,” Garza said. “You know your public buildings, public facilities, your libraries and so forth.”

Garza said a member of the city’s health department attended a county training session on Feb. 24 and plans are under way to distribute flyers and door hangers with information about the virus and preventive measures. He said the information is also available on the city’s website.

He said the city has also requested mosquito traps from the county so it can begin monitoring for the disease-bearing breed of mosquito. In the meantime he said city staff have been conducting a simple test called a landing count.

“So they go to different areas of the city and they stand outside for two to three minutes and count how many mosquitoes land on them,” Garza said, adding historically, the most active areas for mosquitoes in the city have been where high brush exists such as the Madero, Meadow Creek and Tierra Dorado areas.

“According to the landing counts that we have currently done there’s been zero. It’s been good,” Garza said referring to all species of mosquitoes.