It’s been a long haul for the local wrestlers that competed in last weekend’s UIL State Wrestling Tournament. But for four of the 16 Big 7 Schools’ wrestlers who survived the regional tournament, advancing to state, the journey was well worth the effort. All four medaled at state by placing in the top six. 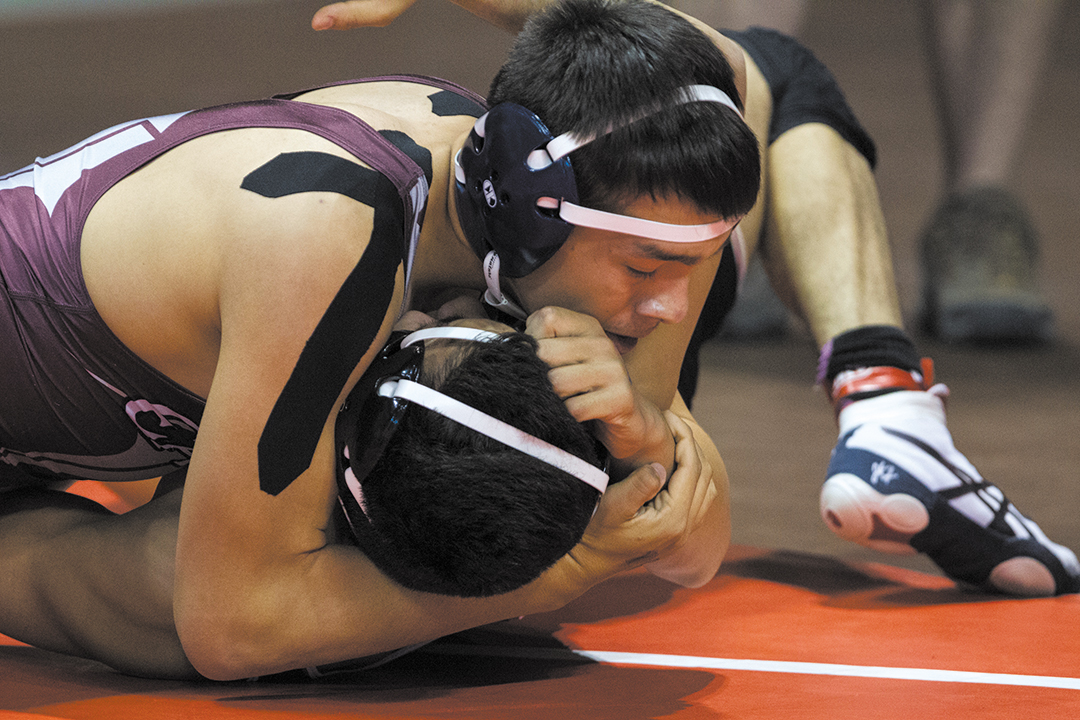 Manuel Vega of Mission (top) defeated Joseph Guerra of South Grand Prairie in the 6A-160 pound class during the final day of the UIL State Wrestling Championship on February 25. Progress Times Photo by Paul Brick

Although the area Big 7 schools – Mission, Veterans Memorial, Sharyland, Pioneer, La Joya, Juarez-Lincoln and Palmview – had 50 wrestlers go to regionals (in various weight classes), only 16 qualified for the state tournament.

At last weekend’s state tournament, held at the Cypress-Fairbanks ISD’s Berry Center, four local athletes finished in the top six in their respective weight classes to earn one of the highly coveted state medals. Of those four, one won her final match of the tournament making her a two-time state medalist, Juarez-Lincoln Lady Huskies’ senior Jesenia Gaytan.

Gaytan, who claimed a district championship and a regional championship en-route to the state tournament, was looking to make it three-for-three with a state championship in her 215 lb. weight class. While that was her ultimate goal, she also set a secondary goal of improving on her fifth place finish last year and walking off the mat in the final match of her high school wrestling career as a top three finisher. And that is exactly what she did, earning a bronze medal at state.

Heading into her semifinal match, Gaytan was just one win away from making it into the championship match and assuring herself of coming home with no less than a silver medal. However, that was not meant to be as she lost that match and was left wrestling for third place.

Gaytan reflected back on her semifinal match and wishes she had used a different strategy.

“If I could have done something different in my semis match, I wouldn’t have chosen bottom during the second period,” Gaytan explained. “Looking back at it I now realize that if my opponent had chosen bottom, I could’ve pinned her. I was very disappointed about the fact that I lost that match and no longer had a chance for state [champion]. But I did not let that disappointment stop me from winning my next match and taking third place.”

When asked if she was nervous going into the third place match, Gaytan said, “I was most definitely nervous. I did not know who I would be wrestling against but as I stepped on to the mat I realized I had wrestled her earlier in the tournament and that I had beaten her by a score of 3-0. That gave me a bit of confidence. I made it two-for-two against her when she chose bottom in the third round, I worked an arm bar in and I pinned her for third place.”

As for how it felt to take the bronze medal, Gaytan said, “I felt accomplished knowing that my hard work had finally paid off. Receiving my medal at the podium was the best feeling I had throughout the tournament. Knowing I was leaving as a bronze medalist overwhelmed me with happiness.”

Despite being a first-year girls head wrestling coach, Juarez-Lincoln’s Bianca Palomin was named Outstanding Coach of the Region IV Tournament. Palomin believes she knows why Gaytan, as well as other Valley girls, are so competitive at the state level when it comes to wrestling.

“I think it’s because a lot of out of Valley wrestlers have a tendency to underestimate our girls,” Palomin said. “But once we get up to the regional and state tournament, it doesn’t take them long to figure out that even though our girls are on the small and petite side, they have a just a little bit more heart and that makes them more determined to win.”

The only other Big 7 wrestler to finish among the top three at state last week is La Joya Lady Coyotes’ senior Rosie Ramirez (119 lbs.). Unlike Gaytan, Ramirez did qualify for the championship match but she came up short against Klein sophomore Xochitl Mota&shy;Pettis (54&shy;1) who took the gold medal by a fall at the 3:02 mark leaving Ramirez as the silver medalist.

Sharyland High’s Joseth Suarez (132 lbs.) and Mission High’s Manuel Vega (160 lbs.) were the only Big 7 boys’ wrestlers to medal. They both lost their fifth place matches to place sixth in their respective weight classes at state.